While most of what finds its way into my mailbox is books, I also receive a surprising amount of music. This works out well since I happen to love listening to music while going about my daily work. Here are four recent releases I’ve been enjoying–two albums of acoustic traditional and modern hymns and two albums of Christian rap music. 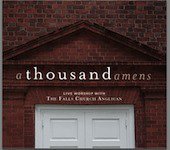 A Thousand Amens – This may well be the only Anglican modern worship album on the market. It’s a good one. The Falls Church Anglican is one of those faithful congregations that refused to compromise the gospel and was forced out of its building. This album was recorded before they had to vacate their property. They sing a variety of songs, including several Sovereign Grace tunes, some hymns, and a few originals. I have especially enjoyed their cover of “Behold Our God” along with “Praise My Soul the King of Heaven” (and the amazing transition between the two). 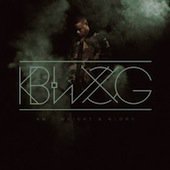 Weight & Glory – Weight & Glory is the debut album from Reach Records’ Kevin Burgess who goes by KB. “We have developed a pattern, a lifestyle that begins with a beautiful conversion and snowballs into a cyclical and sickening pattern. A complacent, idolatrous, lukewarm faith is more common than a radical, love-drunk soldier that has been set on fire. We fear the judgment of men. We lack the boldness to expose heresy. We are quick to lose hope. We are easily distracted.” The album is a call to be fixed on the weight of God’s glory and, with that in our minds and hearts, to battle hard for holiness. It is about as strong a debut album as you could hope for and it’s quickly become one of my favorite Christian hip hop albums. You can buy it at Amazon. 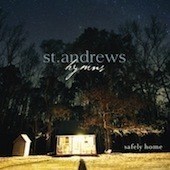 Safely Home – Safely Home is a creation of a band called St. Andrews Hymns. The album has twelve tracks and all but a couple of them are hymns, some set to traditional melodies and some with original melodies. About half of the hymns are well-known with the rest coming from a little bit off the beaten path–a good thing! My favorites are “Down at the Cross” and “O Father You Are Sovereign.” It is available at Amazon. 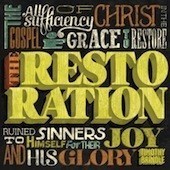 The Restoration – Whether or not you enjoy rap music, you’ve got to appreciate an album with a title like this: The Restoration: The All-Sufficiency of Christ in the Gospel of Grace to Restore Ruined Sinners to Himself for their Joy and His Glory. I can’t sum it up any better than the official description: “With a title like that and Brindle’s history of being thorough on albums, one should expect a lengthy album on how God used the Gospel to restore Timothy in all areas of life. Moving from that, Timothy explains how the Gospel is the means that God uses to restore all of His people back to Himself, as well as all of creation. It is safe to assume that while this album is personal to Timothy, it is universal enough for all to enjoy.” Find it at Amazon.