We put it to the vote and though the results were very, very close, Gresham Machen’s Christianity and Liberalism took hop honors and will be the next classic we read together. I suppose we’ll have to do Knowing God the next time around. 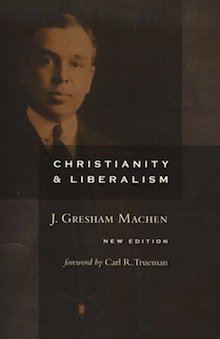 Here is what Machen said about his book.

In my little book, Christianity and Liberalism, 1923, I tried to show that the issue in the Church of the present day is not between two varieties of the same religion, but, at bottom, between two essentially different types of thought and life. There is much interlocking of the branches, but the two tendencies, Modernism and supernaturalism, or (otherwise designated) non-doctrinal religion and historic Christianity, spring from different roots. In particular, I tried to show that Christianity is not a “life,” as distinguished from a doctrine, and not a life that has doctrine as its changing symbolic expression, but that–exactly the other way around–it is a life founded on a doctrine.

This book has long been a classic defense of orthodox Christian faith against Liberalism. Published in 1923 at the height of the Liberal onslaught against orthodox faith, Machen establishes the traditional teaching of the church on Scripture, God, humanity, salvation, and ecclesiology, are not only defensible but preferable to those propounded by Liberals. It is important to keep in mind the Machen is not talking about modern political liberalism, but the religious liberalism many denominations and seminaries were accepting in the early 1900’s. Named one of the top 100 books of the 20th century by Christianity Today and WORLD, this work remains timely, relevant, and important.

It may be particularly relevant today as we see a resurgence of just the kind of denials that Machen battled in his day.

So here’s what I propose. Let’s begin reading the book together on June 2. That will allow 3 weeks for you to track down a copy of the book and to read the Introduction. Then you’ll just need to return here on June 2 and we can share some thoughts and reflections on that Introduction. We’ll then read one chapter per week for the next 6 weeks. And then we will be done, just like that.

The book is widely available, though I’d expect that it will go quickly at some of the e-commerce stores, so you may not want to dawdle. You can find it at:

If you’d prefer to save a few dollars and read it online, you can find it for free at Reformed.org, CCEL, and elsewhere. You can even get the audio book for free.

So get a book, get reading, and check back on June 2.