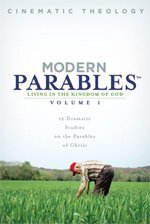 Modern Parables is a Bible study series that uses short films to teach the parables of Jesus. The idea behind it all was to use film to recapture or recreate the kinds of emotions that Jesus’ 1st-century audience would have felt when first hearing those parables. It is remarkably successful. These are high-quality films that have merit both artistic and theological.

The films are geared towards use for youth groups, small groups, evangelism or even home schooling curriculum and the set features six of Jesus’ parables, told anew through film and set in a contemporary context.

The 12-lesson study combines cinema and theology in short dramatic films that exegete (or explain) Jesus’ parables. In other words, just watching the films helps teach the historical, grammatical, contextual and interpretive elements in the parables.

Modern Parables lets people grasp the parables at an immediate, gut level. This emotional immediacy enables them to engage the Bible in a powerful and compelling new way.

Here are the six parables covered in this volume along with a brief description and a trailer for each one.

The parable of the Hidden Treasure is told through the story of Jeff Smith who was having a really bad day trying to sell a horrendous piece of property until he found oil oozing out of the ground. The comedy of the set, this quick-moving and funny piece asks what we would be willing to sell in order to gain great treasure. It is “a light, screwball comedy filmed in the style of Frank Capra. We tried to find funny, heartwarming characters who represented middle America, then built a story around them.” The application video is provided by Dan Doriani of Central Presbyterian Church in St. Louis.

The story of the Good Samaritan is told in the context of an old man who is assaulted and left for dead (though the assault takes place before the story begins). A group of church kids, a deacon who is also a doctor, and a youth pastor all pass him by. It is an Arab man, eyed suspiciously by everyone else, who eventually comes to the old man’s rescue. This video was awarded as the Best Narrative at the San Antonio Independent Christian Film Festival. According to the creators, it is a “tribute to the Swedish film director Ingmar Bergman. We kept the camera still and tried to frame shots simply and with sensitivity to mise en scene. Our score uses a chamber ensemble for a more classical, austere sound.” The application video features George Grant who pastors Parish Presbyterian Church in Franklin, Tennessee.

The Shrewd Manager deals with one of Jesus’ strangest parables, and one that is most difficult to understand. In this adaptation, a farmer plays the role of the shrewd manager, finding a way to make all the neighbors love him before being fired from his job. The movie relies on exaggerated rural accents, old school folk music, and a little bit of humor. Calling this an ironic comedy, the filmmaker says, “The Shrewd Manager tips its hat to Woody Allen with its long takes, simple zooms, and dry humor. We shot the film in Adairville, Kentucky and used a number of townspeople for extras.” Frank Lewis of First Baptist Church in Nashville, Tennessee handles the application, explaining and applying the parable.

The Widow and the Judge

The Widow and the Judge tells the well-known story of a widow who kept coming to an unjust, uncaring judge begging for justice to be served. Eventually, though he cares nothing for the woman, the judge hears her case even if only to be rid of her. The filmmaker says it is “based on the style of the film To Kill a Mockingbird directed by Robert Mulligan. Set in a small Southern town and presented in black and white, it attempts to paint a gentle portrait of an old widow. The film also bears the slight influence of Frederico Fellini’s masterful 8 1/2.” The application is handled by Gene Mims of Judson Baptist Church in Nashville, Tennessee.

The Sower turns to a different genre of film–the documentary. This one is “shot in the documentary tradition starting with Robert Flaherty and Dziga Vertov, and continuing to present. Although the documentary has seen many forms throughout its history, we have attempted a simple, self-narrated exploration of a farmer and his field.” In this film, an elderly farmer simply explains what he has learned through a long career of sowing and harvesting wheat. He leads the viewer through his fields, showing wheat that has fallen in rocky soil, wheat that has fallen among the weeds, and wheat that has sprung up to produce a great harvest. Jeff Schulte of ChangePoint in Anchorage, Alaska shares some points of application.

The final film of the set is easily the best-known of Jesus’ parables. Prodigal Sons tastefully and stirringly tells the story of two sons, one of whom takes his father’s wealth and runs away, and the other who continues to honor his father, though more in word than in deed. The younger son blows his wealth on wine, women and song, and soon finds himself working in a morgue. Meanwhile, the older son remains with his father, turning his back on his profligate brother. This film “has been influenced by the work of the great Orson Welles. With its non-linear structure, its constantly moving cameras, its oblique angles, its sequence shots, and its direct narration, the film seeks to pay tribute to one of America’s greatest directors.” It has a powerful, powerful ending. Scotty Smith of Christ Community Church in Franklin, Tennessee provides the application and builds upon the teaching of Tim Keller, that this parable points to two different kinds of prodigal sons, the relativist and the moralist.

I have watched the films with my family and have used them as curriculum with the youth of our church and in both cases they have been very well-received. I’ve also passed them around church and others have enjoyed them just as much.

I think some of these dramatizations impacted me on a level that the original stories have not for some time. I found myself thinking this is how Jesus’ disciples must have felt as they heard the stories for the first time. I may not understand what it was like to hear a story in which a Pharisee passed by a bleeding, injured man, only to have a Samaritan stop to help him, but I can feel some of that impact in watching a deacon and a youth pastor walk on by only to have an Arab taxi driver comfort the man and care for his needs. And maybe I’ve never really paused to consider what it would be like to find hidden treasure and to sell everything I own to get it–my computer, my car, my television and my wife’s china. The film helped me understand it better.

Let’s be clear–there is nothing at all wrong with the biblical accounts! Yet I do think a fresh retelling of the stories proved beneficial to me and helped me better understand the originals.

If you’d like to learn more about the films, you can visit modernparables.com and order them there. If you are an Amazon shopper, you can either buy the whole set or by them individually. You should probably do just that!