When it comes to good books, we are spoiled. We have access to more good books than previous generations could have even dreamed of. That is true whether we want to read Christian Living books or read deep, academic works. Here is a round-up of some of the new and notables that have come across my desk in the past few weeks. 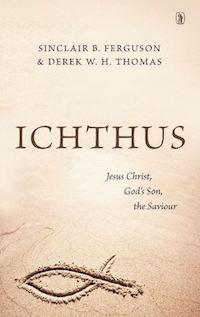 Ichthus: Jesus Christ, God’s Son, the Saviour by Sinclair Ferguson & Derek Thomas. “Ichthus is the Greek word for a fish. Its five Greek letters form the first letters of the early Christian confession that ‘Jesus Christ is the Son of God and Saviour.’ To draw a fish sign meant: ‘I am a Christian.’ To be a Christian, according to the New Testament is to know Christ. But who is he, and what is the meaning of his life? In Ichthus Sinclair Ferguson and Derek Thomas answer these questions by taking us on a tour of nine key events in Jesus’ life and ministry. Their aim is to help us both understand and share the confession of those early Christians who drew the fish sign. Ichthus is a book for everyone and anyone. It will help readers who are already Christians because of what it says about their Master. Those who are wondering exactly what it is Christians believe about Jesus should find many of their questions clearly answered. And those honest enough to admit that they have ignored, or even rejected Christianity but really could not explain what Christians believe about Jesus, will find these pages both clear and challenging. Written by two friends who, between them, have been following Jesus Christ for a total of almost a hundred years, Ichthus will encourage you to share their faith in him.” (Amazon | Westminster Books) 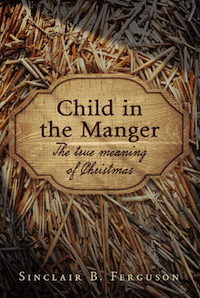 Child in the Manger by Sinclair Ferguson. This one only came my way recently. The publisher offers this description: “The birth of Jesus divided history into two major epochs. Until the dawn of our hyper-sensitive age, even the way we dated events underscored this. From time immemorial every day, every week, every month, every year has been described as either ‘B.C.’ (‘Before Christ’) or ‘A.D.’ (Anno Domini, ‘in the year of our Lord’). Even the modern, pluralistic style abbreviations, B.C.E. (‘Before the Common Era’) and C.E. (‘Common Era’), cannot obliterate the indelible impress of Jesus birth. For what makes the ‘Common Era’ so ‘common’? And what explains the dividing line date? The answer is the same: the birth of Jesus. At the very centre of history stands the person of Jesus Christ. And he does so because he is at the centre of God’s story.” I offer my own description: It’s by Sinclair Ferguson. Enough said! (Amazon | Westminster Books) 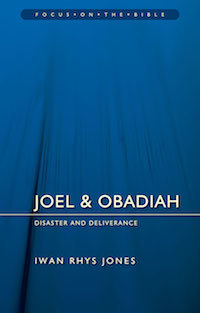 Joel & Obadiah: Disaster And Deliverance (Focus on the Bible) by Iwan Rhys Jones. This is a new volume in Christian Focus’ excellent Focus on the Bible series of commentaries which are ideally suited to the general Christian reader. “Disaster and Deliverance, these two words sum up something of the message of both Joel and Obadiah. In Joel, the prophet begins by announcing a disaster in terms of a locust invasion, which has affected Judah. This, however, is but the pretext for warning of an even greater disaster on the horizon for Judah. Nevertheless, the prophet holds out the prospect of deliverance. In the case of Obadiah, the focus is on Edom. Edom’s pride and longstanding hostility against the people of God has led her to be party to an attack upon them, and as a result, she is threatened with disaster. The people of God, meanwhile, are assured of better things at the hand of the LORD. These two prophets and their message of disaster and deliverance will both challenge and reassure all who have ears to hear.” (Amazon) 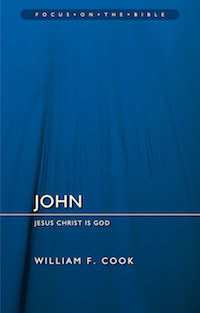 John: Jesus Christ Is God (Focus on the Bible) by William Cook. John is a new New Testament addition to the same series. “John’s Gospel is the mature reflections of the last living apostle. John the apostle wrote this book approximately fifty-five years after the resurrection of Jesus. During those years he had reflected on the words and deeds of Jesus and the result is that the pages of the Gospel contain the seasoned thinking of one of Jesus’ closest friends. New Testament scholar William F. Cook brings us the latest in the popular Focus on the Bible series. In a lucid and engaging style, he leads us through the Gospel of John.” (Amazon) 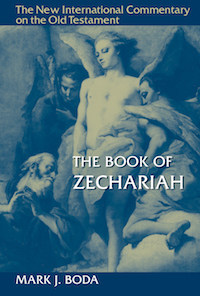 The Book of Zechariah (NICOT) by Mark Boda. The venerable NICOT series continues now with this volume on Zechariah. “Over the centuries, the prophetic book of Zechariah has suffered from accusations of obscurity and has frustrated readers seeking to unlock its treasures. This work by Mark Boda provides insightful commentary on Zechariah, with great sensitivity to its historical, literary, and theological dimensions. Including a fresh translation of Zechariah from the original Hebrew, Boda delivers deep and thorough reflection on a too-often-neglected book of the Old Testament.” (Amazon | Westminster Books) 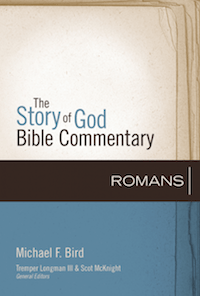 Romans (The Story of God Bible Commentary) by Michael Bird. This is a new series of commentaries designed to be quite easy to read and, therefore, suitable to any reader. Michael Bird has written the entry for Romans. “A new commentary for today’s world, The Story of God Bible Commentary explains and illuminates each passage of Scripture in light of the Bible’s grand story. The first commentary series to do so, SGBC offers a clear and compelling exposition of biblical texts, guiding readers in how to creatively and faithfully live out the Bible in their own contexts. Its story-centric approach is ideal for pastors, students, Sunday school teachers, and all who want to understand the Bible in today’s world. SGBC is organized into three easy-to-use sections, designed to help readers live out God’s story: Listen to the Story; Explain the Story; and Live the Story.” My understanding is that you’d want a few other commentaries on Romans before adding this to your collection. (Amazon) 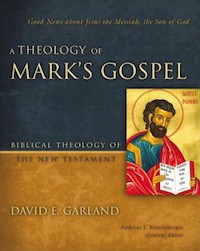 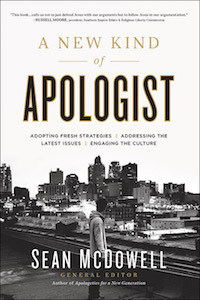 A New Kind of Apologist: Adopting Fresh Strategies, Addressing the Latest Issues, Engaging the Culture, edited by Sean McDowell. “A New Kind of Apologist, edited by Sean McDowell and with contributions from more than 20 leading apologists, is the go-to resource for effectively defending the Christian faith in our changing culture. In it you’ll discover: important topics often ignored by apologists, such as transgender issues, religious freedom, and the intersection of economics and apologetics; a new kind of apologetics that is relational, gracious, and holistic; interviews with both seasoned apologists and skeptics, providing insights into how to do apologetics effectively in today’s culture. A New Kind of Apologist addresses the latest issues, including: Connecting Apologetics to the Heart, Teaching Apologetics to the Next Generation, Apologetics in our Sexually Broken Culture, Apologetics and Islam, Apologetics and Religious Freedom, and adopts fresh strategies for reaching those who are outside the church with the truth of the gospel.” (Amazon) 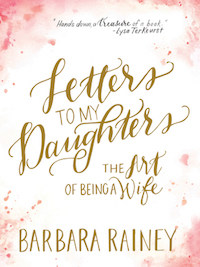 Letters to My Daughters: The Art of Being a Wife by Barbara Rainey. “Radio personality and bestselling author Barbara Rainey knows firsthand the challenges newly married couples face. Dismayed by Hollywood depictions of marriage and the seemingly easy solution of divorce, she sees a desperate need for a voice of experience, a mentor who has been there and understands–and can encourage, coach, and care. As her daughters began their married lives, Barbara wanted to share with them, and now you, some of the lessons learned throughout her own marriage as well as those gleaned from years of ministry to couples. In these heartfelt, insightful letters, she answers the tough questions and addresses the realities of marriage. Through personal stories–including her own mistakes–and practical advice, Barbara provides the tools and direction to help you become a godly wife and determine your part in achieving a better marriage.” (Amazon) 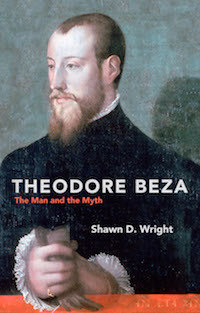 Theodore Beza: The Man and the Myth. “Theodore Beza? Who is he? Why should I care about him? Well, I’m glad you asked! Theodore Beza was a man who in his day was one of the luminaries of the Protestant world, who took the reins of the beleaguered Calvinistic movement after its namesake’s death, and who influenced English-speaking Protestantism more than you might imagine. Shawn D. Wright casts light on a figure often neglected and helps illustrate the significant impact of his faith and influence.” (Amazon) 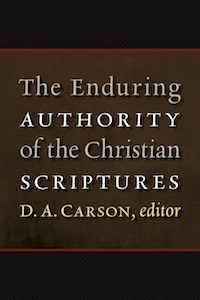 The Enduring Authority of the Christian Scriptures, edited by D.A. Carson. “In this volume thirty-seven first-rate evangelical scholars present a thorough study of biblical authority and a full range of issues connected to it. Recognizing that Scripture and its authority are now being both challenged and defended with renewed vigor, editor D. A. Carson assigned the topics that these select scholars address in the book. After an introduction by Carson to the many facets of the current discussion, the contributors present robust essays on relevant historical, biblical, theological, philosophical, epistemological, and comparative-religions topics. To conclude, Carson answers a number of frequently asked questions about the nature of Scripture, cross-referencing these FAQs to the preceding chapters. This comprehensive volume by a team of recognized experts will be the go-to reference on the nature and authority of the Bible for years to come.” (Amazon | Westminster Books)