Christian Audio has some good deals this month. There are discounted audiobooks by John Piper, Donald Whitney, and Richard Phillips. There’s also a solid biography of Martin Luther.

If you’re looking for something to read, Adam Higginbotham’s Midnight in Chernobyl is fascinating; I could hardly put it down.

Will We Learn in Heaven?

Who Needs Dogma When Stigma Will Do? (Sponsored Links)

People resort to slogans, Twitter soundbites, or short status updates, but we don’t take the time or have the patience to define and then defend what we’re actually saying. When it comes to knowing what we believe, this matters.

TGC has an interesting “multiple views” look at IVF. Matthew Lee Anderson and Andrew T. Walker caution against it while Wayne Grudem advocates it (with caveats, of course). “The separation of conception from sexual intercourse raises problems on its own, problems that outweigh any justification for using IVF to overcome infertility. To put our worry bluntly, God bound sex and procreation together in creation, and what God has joined together, no evangelical should separate.” Meanwhile, Grudem says, “In principle, the teachings of Scripture present no moral objection to a married couple using IVF (as long as no human embryos are destroyed in the process), because it is simply enabling an infertile husband and wife to overcome their infertility and thereby experience the blessing of having children.”

The Man Behind the Yonge Street Van Attack

What kind of man purposefully runs down pedestrians? Toronto Life has a profile of Alek Minassian who carried out a horrifying attack in 2018. (Note: language warning.)

It’s an important distinction. “A pastor told me how encouraging it is when, years later, former students return to tell him how they’ve made the ‘faith their own.’ It’s a phrase he used to encourage students with, especially those near graduation. But he also told me how discouraging it was when one particular student returned to tell how he had made the faith his own. As the former student described this thing he considered ‘the faith,’ it became clear he had not made the faith his own but rather made up his own faith. There’s a big difference.”

Theology for the Rest of Us

Wendy Alsup: “As the stresses of life press in on me, leaving me with little margin, my Scripture reading and study can be easily squeezed out along with the rest of the margins. It helps to remember I need Scripture for survival. Scripture isn’t something for the margins of my life. It is the lens through which I read the busy words on the paper. Scripture enables me to make sense of the chaos instead of being tossed about by it.”

Why Buying A Home Is Usually A Terrible Investment (Video)

Here’s an alternate (but increasingly common) view of home ownership. “A lot of people will tell you that buying a home is a good investment — and that couldn’t be further from the truth.”

In those times we feel our zeal waning, when we feel the temptation to skip out on a Sunday or withdraw altogether, we should consider our God-given responsibility to encourage “one another, and all the more as you see the Day drawing near.” 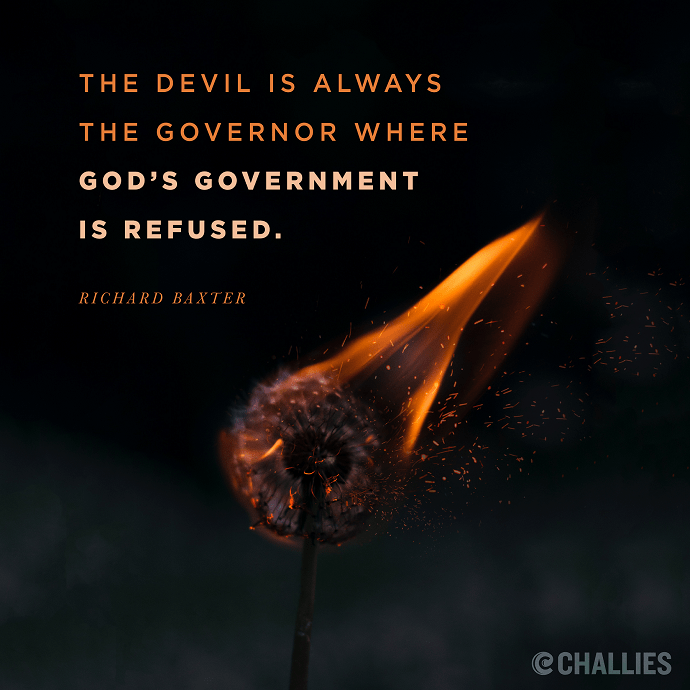 The devil is always the governor where God’s government is refused. —Richard Baxter