Today’s Kindle deals include some titles that I don’t think I’ve ever seen on sale before (like Remember Death).

(Yesterday on the blog: What’s the Point? (Alternative Ways to Frame Your Sermon))

The First Sexual Revolution: The Triumph of Christian Morality in the Roman Empire

Kevin DeYoung reviews a book about how Christianity changed sexual morality across the Roman Empire. It’s an interesting and important review, not just because it helps set biblical context, but also because it shows that we aren’t the only generation that’s had to face fearsome, harmful sexual mores.

‘Grand Bahama is Dead’: A Firsthand Look at Dorian’s Destruction

Here’s a blunt, descriptive, firsthand look at the utter devastation on Grand Bahama.

This is a great little article on words and the Word.

I don’t listen to a lot of the kind of music that necessitates a conductor, but I still enjoyed this look at what conductors are doing up there.

Praying Beyond the Prayer Card

Abigail Murrish: “I’m realizing more and more that my telos informs my prayers for my daughter. My prayers also reveal the telos. And so often that telos is the same as the culture around me—I want safety and comfort, academic and professional success, a respected reputation in my community, and financial security. The only difference is that Christianity is merely the mechanism I use to meet it. As I look at my prayers, I’m challenged to go to scripture and let it reshape my vision of ‘the good life,’ and then let that new vision reshape my prayers.”

Why Phones that Secretly Listen to Us Are a Myth

I wouldn’t say that this article offers conclusive proof that our phones are not eavesdropping on us, but I’d say it does a pretty good job of addressing what is probably an urban legend.

What Do My Best Days Cost?

“Think of what Jesus left behind when he came to us. All the joys of heaven, in the presence of the Father, make even the best days on earth seem like a wasteland. He gave it up to spend thirty years experiencing all the agony of humanity. Jesus, for whom the entire creation was made, emptied himself to become our servant.” 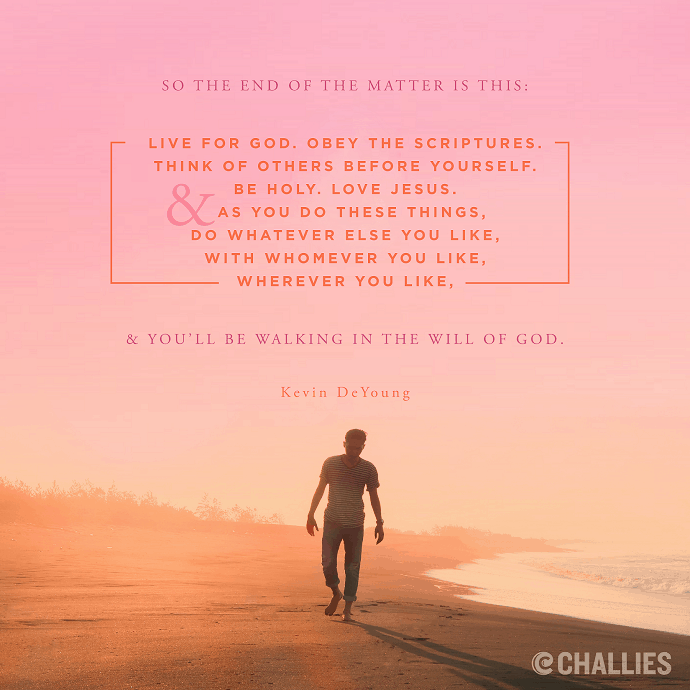 So the end of the matter is this: Live for God. Obey the Scriptures. Think of others before yourself. Be holy. Love Jesus. And as you do these things, do whatever else you like, with whomever you like, wherever you like, and you’ll be walking in the will of God. —Kevin DeYoung