Today’s Kindle deals include some newer books and some older ones; there are some good picks!

Westminster Books has a sale on R.C. Sproul’s excellent commentary on the Westminster Confession (which has been newly reprinted). You may also be interested in the ESV Creeds & Confessions Bible.

(Yesterday on the blog: The Gospel According to Satan)

Every Place Is the Same Now

What an interesting reflection on our new technologies. “Until the 20th century, one had to leave the house for almost anything: to work, to eat or shop, to entertain yourself, to see other people. For decades, a family might have a single radio, then a few radios and a single television set. The possibilities available outside the home were far greater than those within its walls. But now, it’s not merely possible to do almost anything from home—it’s also the easiest option. Our forebears’ problem has been inverted: Now home is a prison of convenience that we need special help to escape.”

5 Features That Made the Early Church Unique

It’s an interesting question: “Why, if Christians were seen as offensive and were excluded from circles of influence and business and often put to death, did anyone become a Christian?”

You may not agree with all these reasons, but I expect you’ll agree with the majority. “When I was a teen and in my early 20s, nobody told me how fulfilling and meaningful I would find having children. So I suspect nobody has told most other young people either.”

I rather enjoyed this longform article on the hunt for treasure lost at sea. “As technology renders the seabed more accessible, the hunt for treasure-laden ships has drawn a fresh tide of salvors and their investors—as well as marine archaeologists wanting to exhume the lost relics. But of late, when salvors have found vessels, their rights have been challenged in court.”

Here is one for pastors to consider as they consider the coming Sunday. “If there is one area in which I wish to grow, it is in this–an ever increasing joyful and affectionate longing to be with and labor for the people of God.”

Is a Similar Sense of Calling Required for Marriage?

I’m not sure that I agree with John Piper all the way here, but I do appreciate the way he redirects this question to a more foundational one. “Will God give my future spouse a similar calling to the calling he has given me? Should we expect marriage to be a harmonizing of vocational passions?”

James 3:1 and the Trembling Teacher

Melissa writes for the benefit of all who teach the Word. “So, trembling teacher, it’s good to feel the weight of your responsibility. It’s good to realize that this work shouldn’t be taken lightly. Preparing to teach should be a careful and diligent process, one that is steeped in prayer and study and conscientiousness. But it’s also essential to remember that God can and does work through our weaknesses.”

Flashback: On Being Thought Well of By Outsiders

So, am I thought well of by outsiders? I don’t think they think poorly of me. What concerns me, though, is that I’m not convinced they think of me at all. And I think many pastors find themselves in that very same situation. 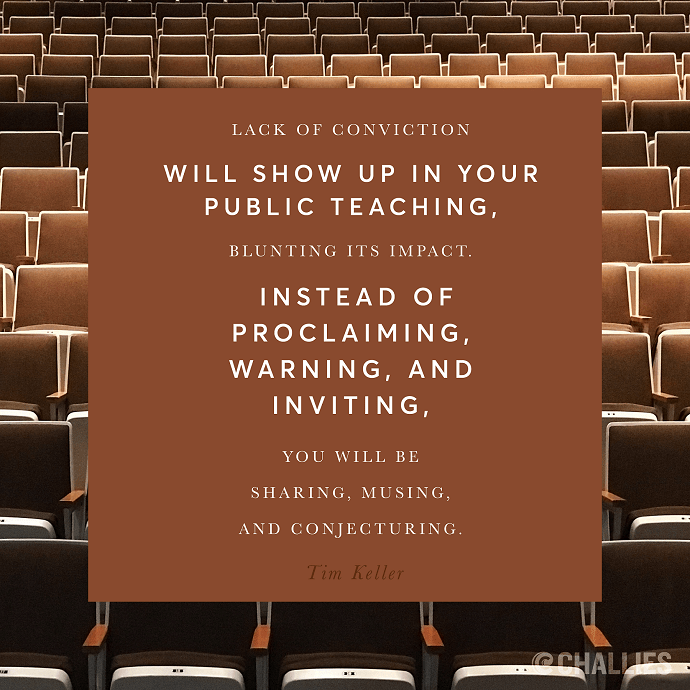 Lack of conviction will show up in your public teaching, blunting its impact. Instead of proclaiming, warning, and inviting, you will be sharing, musing, and conjecturing. —Tim Keller