Nick’s gravestone has finally been installed, and I have come to see it for the very first time. I have been looking forward to this day and dreading this day in equal measure. For months I have had to visit an unmarked grave, a patch of bare earth with no way to identify the name of the precious person who lies beneath it. Surely my son deserves so much better. Yet now that it comes to it, I also hate seeing his name carved on a slab of stone. There is something so unnatural about this. So stark. I can’t decide if this gravestone is the final honor associated with his life or the final indignity associated with his death.

I read aloud the words I prepared months ago. At that time they were fleeting black characters tapped onto a flickering white screen; now they are permanent white characters etched onto a polished black stone. It was important to me then, and remains important to me now, that his Christian faith is made as explicit in his death as it was in his life. In a place where so many are buried beneath vapid platitudes and trite iconography, I want the world to know that this man loved Jesus and has gone to be with him.

Nicholas Challies
Mar 5, 2000 – Nov 3, 2020
Loyal son to Tim and Aileen,
kind brother to Abigail and Michaela,
devoted fiancé to his beloved Ryn,
faithful follower of Jesus Christ.
——————
He fought the good fight,
He finished the race,
He kept the faith.

My eyes return to those two dates and the dash between them. I wonder: How long is that dash? How long is that single little character we use to separate the date of birth from the date of death? Is it an inch? Is it two? In a sense it doesn’t matter, but in a sense it matters a great deal, because encapsulated in that line is the story of a life lived then lost, a life begun then ended, a life celebrated then mourned. For the old man buried in the plot just beyond, the distance between the left and right edge of that dash tell of a full, rich threescore and ten. For the little girl in the next row it represents mere months. For Nick it represents 20 years: March 5, 2000 – November 3, 2020.

I imagine, for a moment, that the dashes on every gravestone here could be made proportional to the length of the life lived. Those who died in infancy, whose earthly life was measured in minutes or hours, might have a dash no longer than a fraction of an inch. Those who died in childhood might have half an inch. Nick was given 20 years, so perhaps his could measure the full inch. And so it goes, two inches to the 40-year-old, four inches to the 80-year-old. Maybe a little bonus could be awarded to the few who reached their 100th birthday. Had old Methuselah been buried under a headstone here, perhaps his dash would span several feet across an absurdly elongated monument.

And then I wonder, how long is eternity? How long is forever? What kind of dash might represent the life that has a beginning but no end? How long would be the line that begins on March 5, 2000 and extends for 10,000 times 10,000 years? That line would extend beyond the edge of this monument, carry beyond the boundaries of this cemetery, and pass the borders of this town. It would reach Canada’s beautiful Maritime provinces, stretch across the cold Atlantic, and touch the Western shores of Europe. It would carry across the bare steppes of the East, leap the Himalayas, cross the Asian continent, and plunge into the mighty Pacific. After thousands of miles across the deep ocean floor it would gain land again, cross Canada’s prairies, and finally return once more to Oakville. But even then, it would be only getting started, for it would begin another circumnavigation of the planet, then another. It would stretch endlessly farther than the circumference of this earth, it would wrap infinitely and eternally around and around this great planet. That’s the true span of life, the truth length of the dash, for immortal souls made in the image of an immortal God.

I have little capacity to grasp eternity, to imagine forever, to understand what begins but never ends. My mind is too weak, my imagination too limited, my vision too clouded. Yet this is the promise God has made, that those who put their faith in Jesus receive life eternal, that those who accept his gift of grace are granted life unending, that those who die in him will reign with him forever and ever.

I am both challenged and comforted by the thought. I often lament the brevity of Nick’s life, the abruptness of his departure. I often wonder what significance there can be in a life that was only 20 years long. But if our dashes extend endlessly into the infinite reaches of time and space, there is little difference between the one inch or two, between the two inches or four, that represent our time here on earth. This world is merely the place of preparation for what lies beyond. It is the classroom, the training ground, the finishing school. Even those who die the oldest are like a mist that appears for just a while, then vanishes, like a breath that is drawn in, held for a moment, then released. Compared to the endless ages beyond, even the longest life here is the blink of an eye, the tick of a clock, the length of a dash.

When Jesus was preparing to say farewell to his disciples he gave them a promise: “A little while, and you will see me no longer; and again a little while, and you will see me.” He was going away, but not permanently. He was departing, but not for good. “Just a little while,” he assured them. That promise must have been precious to them as they waited in bewilderment following his crucifixion, as they waited in anticipation following his ascension, as they labored through persecution following the day of pentecost. “Just a little while.” Just hold on a little longer. Just endure for a short time more. Just wait for a moment, for a tick, for a dash, and then you’ll see that I’m true to my word, faithful to my every promise.

“Just a little while.” These are words I am clinging to every bit as much as the disciples. I miss Nick more than I have the capacity to express. I ache to see him, long to hug him, yearn to talk with him. And I will. I’m sure I will. Jesus has promised there is boundless joy beyond this bounded life. I don’t know how much time the Lord has allotted to me. I don’t know when my “little while” will arrive, when my turn will come to be lowered into the ground beside my boy, when my gravestone will be ordered and carved and installed. I don’t know what date will be etched onto its surface to represent the time of my departure. But I do know that whether it is days from now or decades, the line between the day of my birth and the day of my death will represent a blip, just the briefest of moments, when compared to the vast eternity to come. And then I’ll be forever with my boy, just beyond the edge of my dash. 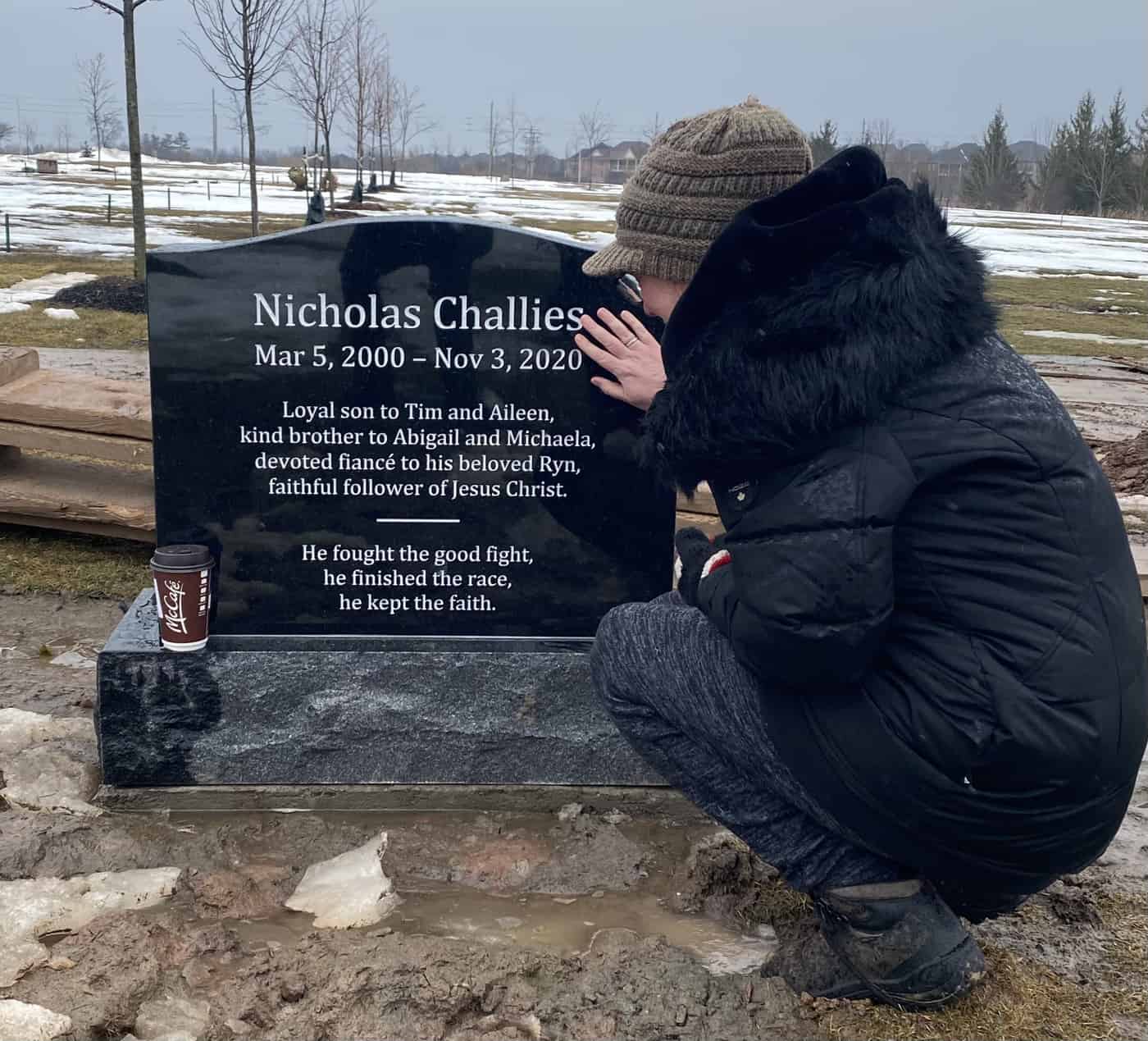 (Our first time seeing the monument; I often take Nick a coffee when I visit.)