How much television do you think you watch? No, honestly, how much? And how much time do you give to other screens—your mobile phone, your tablet, and whatever it is you use to watch Netflix? A brand new study from Nielsen suggests that it is a lot. A heap. A ton. Way more than you would guess, I’m sure. Let me walk through some of the most interesting findings. 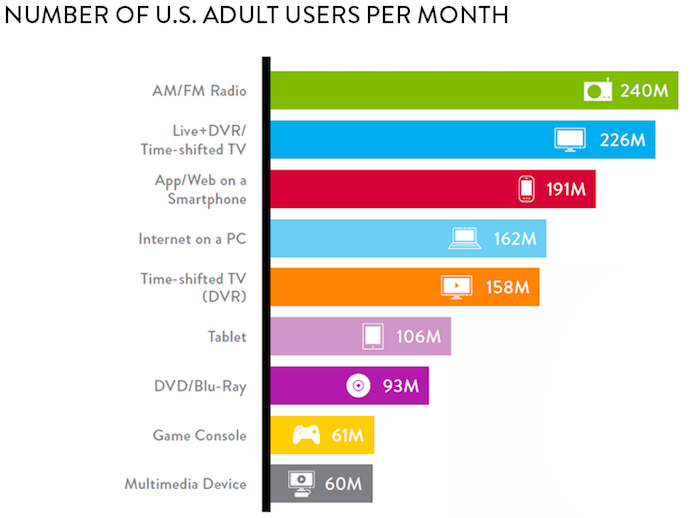 Even while we hear so much about Netflix and podcasting and other new forms of media consumption, radio and television remain dominant. That said, smartphones and PCs are racing up behind them and, presumably, will someday displace them. 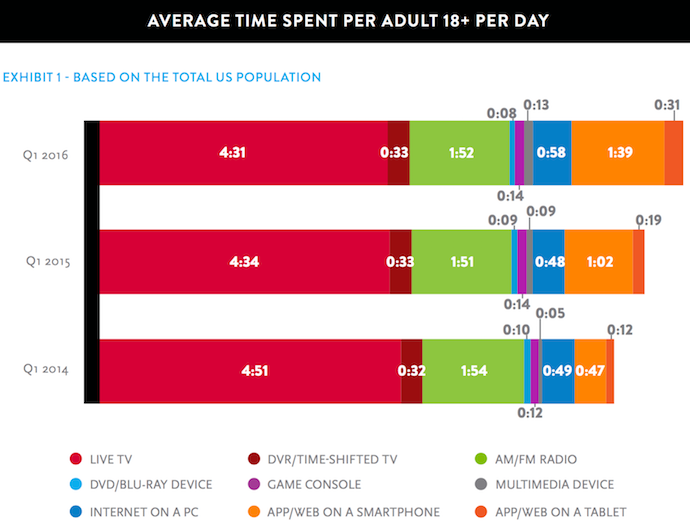 Next we see how adults spend their time today. Tally it up and you see that the average American adult (and I’ll presume Canadians are not too different) currently spends 10 hours and 39 minutes each day consuming media. This represents an amazing 1-hour jump from just a year ago. Television consumes the biggest portion of the day at 4 hours and 31 minutes. Radio is just behind it at nearly 2 hours and coming in third is the smartphone with a showing of 1 hour and 39 minutes. 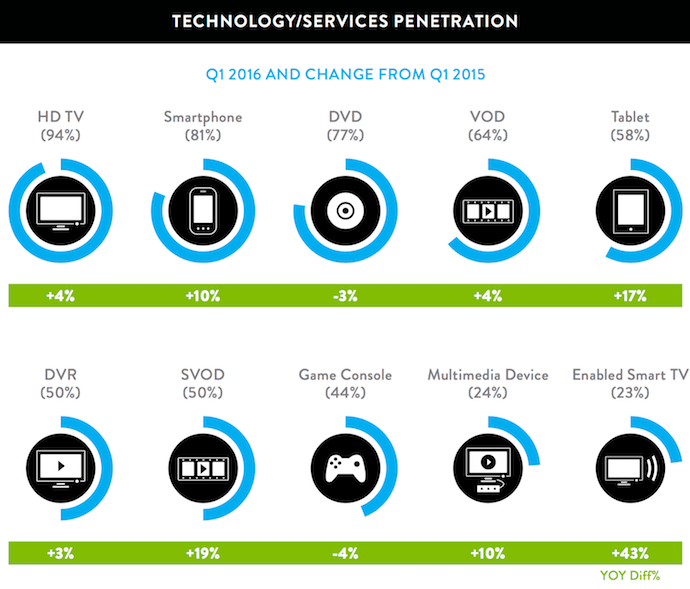 Here we see how many households have access to the various media possibilities. 94% of households have a high definition television, 81% have a smartphone, and so on. We have many options when it comes to consuming media. 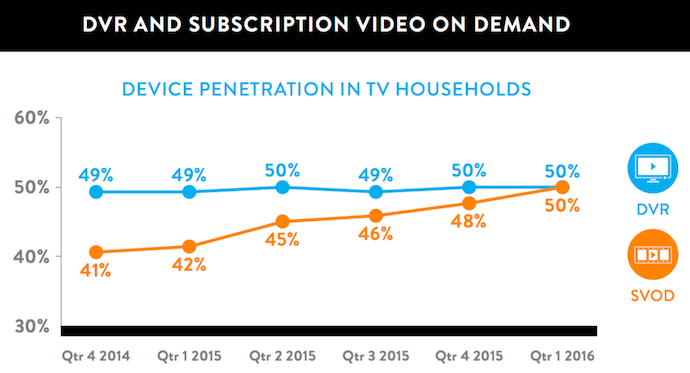 This little graphic shows that Netflix and similar services (known to Nielsen as SVOD or “subscription video on demand”) has caught up to the DVR and will probably soon leave it in its wake. One medium is on the way up and the other has long since plateaued. The real surprise here is the penetration of SVOD services which has now reached 50% of American households. Half of us pay for Netflix, Amazon Prime, Hulu, or a similar service and, therefore, have access to their massive binge-watch libraries. 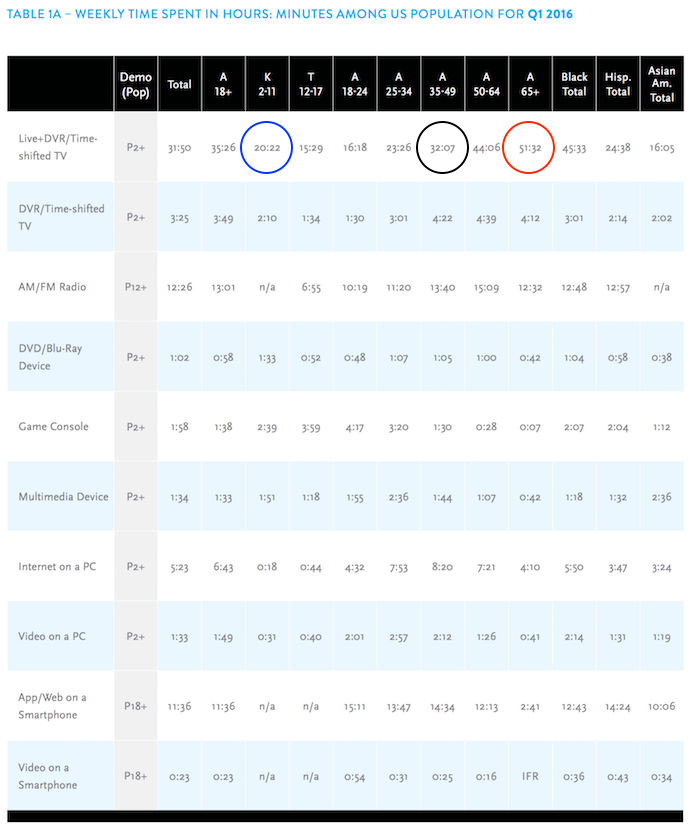 The next image may be the most interesting of all. Here we have a breakdown of each medium for each demographic. Note that the numbers are hours:minutes and represent a weekly tally. So, for example, you’ll see in the blue circle that children are averaging 20 hours and 22 minutes of television each week or just about 3 hours per day. But, before you get too judgmental, look at the black circle and you’ll learn that their middle-aged parents are averaging 32 hours and 7 minutes of television time per week or five-and-a-half hours per day. Slide over to the red circle and you will learn that even this is nothing compared to what senior citizens are doing with their time since they average more than 51 hours per week, or more than 7 hours per day! Remember that this does not include Netflix, Apple TV, or any other form of viewing apart from live or recorded television. For the parents, then, you need to add an additional 1 hour and 56 minutes per week for watching programs on a computer, another hour and 11 minutes for watching on DVD, and so on. The final totals are staggering.

There are other interesting things to note, such as the surge of console gaming between the ages of 12 and 24 and the significant growth from 2015 in smartphone time among young adults (though you’ll need to access the full report to see the comparison). 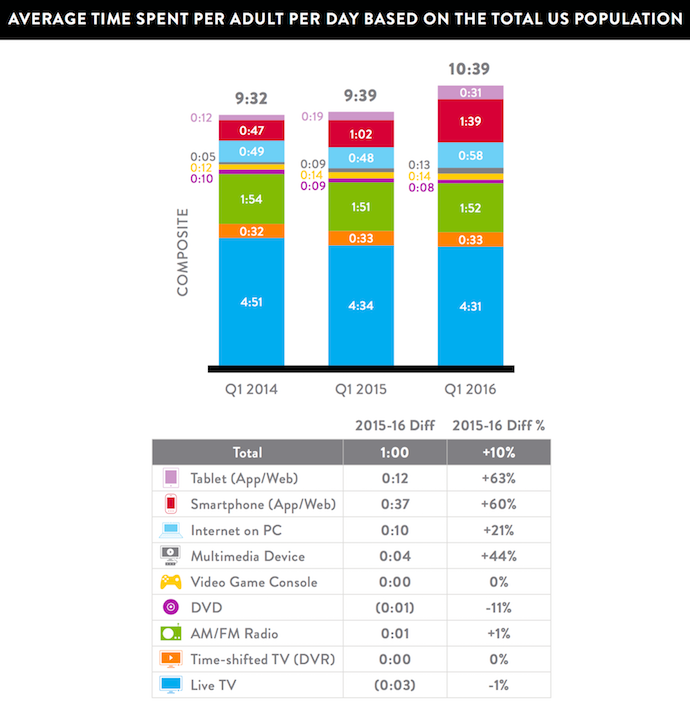 We’ll end off with this graphic which shows again how much time people spend with each media. It also shows the growth of some media and the decline of others.

What do we make of all this? We can draw all kinds of conclusions, but I’ll offer just 3.

We are absolutely drenched and drowning in media and spend more than half our waking lives in its glow. We just can’t seem to get enough. Seventy years ago we had no screens in our homes; today we have surrounded ourselves with them. Do the math on television and you’ll see that for many people the TV is on from the moment they return home from work to the moment they go to bed.

We love media so much that we take every opportunity to encounter and consume it. When a new medium comes along, we are quick to add it to what we already have. The new medium gains quickly while the old ones fade slowly. What remains consistent is our desire to have access to it.

We tend to associate media consumption with youth while the more accurate association is with age. Plan and prepare today or you, too, may someday dedicate your final years to little more than consuming media (which is to say, entertainment). Perhaps we should see an opportunity here to have senior Christians serve their churches and be served by their churches. Those wasted hours and wasted years are such a tragedy!

John Piper once tweeted “One of the great uses of Twitter and Facebook will be to prove at the Last Day that prayerlessness was not from lack of time.” He is absolutely right and we can extend what he says to all of our media and to all of our Christian lives. Our great commitment to entertainment proves beyond doubt that we have no excuse for prayerlessness, no excuse for ignorance, no excuse for any failure to carry out God’s Great Commission.