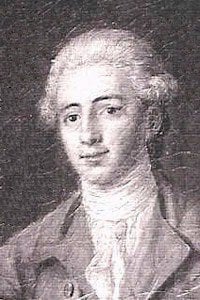 Edward Perronet was born in England in 1726, the grandson of a French immigrant. His father, Vincent, was a clergyman in the Church of England and a close friend and associate of John and Charles Wesley. Though Edward had planned to follow his father into Anglican ministry, the influence of the Wesleys prevailed, and he became a traveling Methodist preacher.

Louis Benson records in his Studies of Familar Hymns, Second Series that Edward was a capable preacher and sincere follower of Christ. For some reason, however, he developed a strong antagonism towards the Church of England, and began to express it in his behavior and speech. This proved to be a source of trouble for the Wesleys. (Benson describes Edward as having an “irascible temper, an impatience of authority, and a touch of bitterness that grows with ‘not being understood'”) Edward eventually left the Methodist movement and settled down with a dissenting congregation, which he pastored until his death in 1792.

In addition to preaching, Edward was also a skilled writer; and in the latter years of his life he published anonymously, in a series of small books, a number of hymns he had composed. One of these books, Occasional Verses, Moral and Sacred, contains as its third entry the hymn titled “On the Resurrection,” which is now known as “All Hail the Power of Jesus’ Name.”

Below are the original lyrics to the hymn, as first published in Occasional Verses. The hymn was originally sung to the tune “Miles Lane,” written by a friend of Edward, William Shrubsole. Just a few years after its release Oliver Holden of Massachusets composed an alternate tune for it, “Coronation,” which is the melody most familiar to us in North America. One other melody, popular in Australia and with choirs, is “Diadem.”

All hail the power of Jesu’s name!
Let Angels prostrate fall;
Bring forth the royal diadem,
To crown Him Lord of All.

Let high-born Seraphs tune the lyre,
And, as they tune it, fall
Before His face who tunes their choir,
And crown Him Lord of All.

Crown Him, ye morning stars of light,
Who fix’d this floating ball;
Now hail the strength of Israel’s might,
And crown Him Lord of All.

Crown him, ye martyrs of your God,
Who from His altar call;
Extol the stem of Jesse’s rod,
And crown Him Lord of All.

Ye seed of Israel’s chosen race,
Ye ransom’d of the fall,
Hail Him who saves you by His grace,
And crown Him Lord of All.

Hail Him, ye heirs of David’s line,
Whom David Lord did call;
The God incarnate, man Divine;
And crown Him Lord of All.

Sinners! whose love can ne’er forget
The wormwood and the gall,
Go—spread your trophies at His feet,
And crown Him Lord of All.

Let every tribe, and every tongue,
That bound creation’s call,
Now shout in universal song,
The crowned Lord of All!