One of the reasons Christians don’t use marijuana is because doing so is against the law, in the United States at least. But what about when the law changes and suddenly, overnight, it’s (supposedly) legal? For some of you, that’s your reality. For others, it will likely be your reality in the not too distant future.

You probably noticed that word supposedly in the previous paragraph. Because, although medicinal and recreational use of marijuana is still prohibited by federal law in the United States, that hasn’t stopped some states from joining Washington and Colorado in legalizing it anyway. This week California, Massachusetts, Maine, and Nevada passed measures to legalize recreational marijuana use. Arkansas, North Dakota, and Florida voters approved medicinal uses for marijuana as well.

How should Christians respond in a situation like this? We should start with the Bible, specifically what God’s word says about government. I have adapted this from a new book published by Cruciform Press titled Can I Smoke Pot?, authored by Tom Breeden and Mark L. Ward.

In Romans 13:1-7, Paul commands all Christians to be subject to governing authorities. Paul didn’t write this because his preferred political party was in power. Instead, he points his readers toward a much more fundamental reason to obey governmental authorities:. “There is no authority except from God, and those that exist have been instituted by God” (Rom. 13:1). Paul says that the government is acting on God’s behalf. No one holds an office unless God has put them there.

Since all governmental authority comes from God, Christian faithfulness requires us to “honor the emperor” (1 Pet. 2:17). As a general rule, resisting the government is the same as resisting God (Rom. 13:2).

2. Government exists for our good

God didn’t create government to put a boot to our neck; God made it for our good. Paul goes on to say that the government’s job is to reward what’s good and punish what’s evil (Rom. 13:3-4). Peter echoes this same truth in one of his letters (1 Pet. 2:14).

Of course, human governments don’t always live up to God’s intended design. Like every good gift that God gave to us, government has been corrupted by sin. Government’s work fighting the effects of the fall and encouraging the good in creation is complicated by the fact that governments themselves are twisted by the fall—and run by fallen people.

A quick read through 1 and 2 Kings shows that not even the nation of Israel, God’s own people, had a government free of the corrupting effects of sin. When Paul and Peter instructed Christians to submit to the government, they did so with the vivid memory that those same authorities crucified Jesus Christ.

Sometimes governments fail to punish evil. Sometimes they might even reward it. No government passes perfect laws after the Fall.

Governments today are typically made up of multiple levels of authority, from city to county to state to nation (the labels are a little different here in Canada, but the general idea is the same). In the United States, whose national election got me thinking about this subject of marijuana and legality, the two major levels are state and federal. Both these levels of government are established and ordained by God for our good, so Christians must submit to each level of authority. Romans 13 is true of them both.

As Tom Breeden and Mark Ward have written,

Even though the U.S. government has been inconsistent (to put it mildly) in the enforcement of its own laws in this area, marijuana is nevertheless a Schedule 1 controlled substance at the federal level, technically a no-no for practically all Americans, regardless of what state laws might say.

It is certainly possible that the federal government will before too long decriminalize the recreational use of marijuana. After all, America winks at drunkenness and so highly values individual autonomy that this wouldn’t be too surprising. But it must be noted that even if the President one day signs a bill to that effect, Christians living in any state that forbids recreational pot use are still forbidden by Scripture from indulging. Wherever Caesar speaks out of both sides of his mouth on this question, only one group will surely be safe: the abstainers. As of this writing, for any Christian, anywhere in the United States, to smoke pot is to resist the governing authorities. It is, in unmistakable terms, to resist God.

So if you’re affected by any of these new changes, many of the rest of us may be joining you, little by little, as trends continue to shift. And we should all remember that while election results may come and go, they can never alter the Bible’s teaching about government. 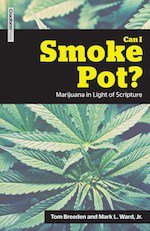 Some of this material was, of course, informed by the brand new book from Cruciform Press, written by Tom Breeden and Mark L. Ward, Jr., titled Can I Smoke Pot? – Marijuana in Light of Scripture. It addresses marijuana from the perspective of Creation, Government, Medicine, and Alcohol. For the next few days the book is available on Kindle for 99 cents, in paperback for $6.99, and if you review books you might even be able to get it for free.