It began harmlessly enough—just a little bit of numbness in three toes. At first it was no more than an annoyance, but then the numbness spread to her foot and began to creep upward. Soon it was accompanied by fatigue, nausea, headaches. She visited a doctor and then a neurologist who promptly arranged a battery of tests. And then the diagnosis: “I am so sorry, but it is a brain tumor.” Though the tumor was benign, it was in a bad spot, right at the junction of the brain and the spinal cord. In that moment she knew her life had changed forever.

This is the story of Elaine Grant, a dear friend of my family’s, a sister in Christ, and a woman of exemplary Christian courage.

One Who Knows Christ 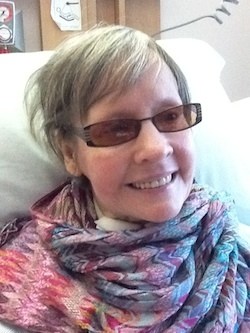 Let’s back up a little bit, all the way to the early 80’s. Back then Elaine lived just down the block from my family in a beautiful North Toronto neighborhood. She and my mother were both young moms, dedicated to raising their children. Elaine was articulate, meditative, and the kind of person who read right through the Globe and Mail, Canada’s weighty, national newspaper. The two families bonded immediately.

Around 1981 Elaine suffered a series of tragedies. In close succession she lost her father, her mother, and her marriage. But amid all the loss, she found Jesus. Or, better said, he found her. My parents shared the gospel with her, introduced her to their church family, and watched her begin to pursue God.

Some of my earliest memories in life are of Elaine and her children, Erinn and Logan. Erinn was a year or two older than me, and Logan a year or two younger. We played outdoors together, racing up and down the sidewalk in front of our homes. I have a snapshot memory of arguing with Erinn at the top of a flight of stairs, trying to settle a meaningless childhood squabble. I have another memory of her singing at a piano, singing beautifully. The two families shared life together for a time.

Those years as a single mom brought Elaine many personal and financial challenges, but she clung to the Lord, and, in the most important ways, she and her children thrived. But that was two decades before Elaine received the news that would change her life.

One Who Knows Suffering

“I am so sorry, but it is a brain tumor.” The doctor recommended exploratory surgery and, once he got a better view of the tumor, determined it would be best to leave it for a time. The tumor had room to grow and leaving it for now would delay the inevitable neurological damage that would come when he removed it.

Four years passed. Elaine moved to an apartment downtown and settled into normal urban life. She enjoyed the simpler things of life. She walked downtown, though she needed to lean upon a cane as the tumor grew. She spent as much time with her family as she could. She served at a local congregation of the Presbyterian Church of America. She enjoyed coffee, pastries and movie nights. She enjoyed old friends—friends whose names were a part of my childhood, friends who still call me “Timothy” and silly childhood nicknames.

As the tumor grew, so too did Elaine’s spiritual strength and spiritual reserves. But always the threat of surgery and brain damage loomed ominously in her mind. Doctors had warned her that the coming surgery would be so invasive and so damaging that in many ways her condition following the surgery might be worse than her condition going in, though only time would tell how much worse. But this would be the only way to preserve her life.

The day of surgery came at last.

The long procedure was deemed successful because the tumor had been fully removed. But it had been removed at a devastating cost to her body. Months of hospitalization and rehabilitation would follow, months spent in the bustling, windowless Intensive Care Unit. These were the darkest days. Looking back today, Elaine has no memory of praying, no memory of the felt presence of the Lord. God was not absent, but neither does she remember him being clearly and tangibly present amid that haze. But those who loved her were praying with her and for her. Those deep spiritual reserves sustained her.

Doctors were hopeful for significant recovery but first had to grapple with an extensive list of debilitating secondary consequences: infection, double vision, and even terrifying waves of paranoia. But of all the challenges she faced, living without a voice was by far the most disabling and frustrating. Eventually a tracheostomy gave her back the gift of speech and allowed her to breathe on her own. Even then, the simple action of breathing in and out required a complete retraining of her body and, to this day, this remains the most difficult thing she has ever done.

Finally the time came when Elaine would “graduate” from intensive care to acute care. It may have been a small victory, but it was a victory nonetheless at a time when such victories were hard to find and were measured in inches rather than miles. Even then, the triumph was tempered by the reality that she would never recover many basic functions. The surgery that had saved her life had permanently devastated her body. She would never be able to live without assistance. She would never stand or walk again. Her arms and fingers were severely limited. She would never regain the ability to swallow and, therefore, would never again be able to eat or drink. To this day, the only thing she can have in her mouth is toothpaste.

Medical hurdles mounted. She was diagnosed with breast cancer and had a mastectomy. She has fought pneumonia more than once and endured another complicated neurosurgery to remove an infection from just outside her brain. One time she had to be revived after nurses found her unconscious and not breathing. She survived without brain damage. 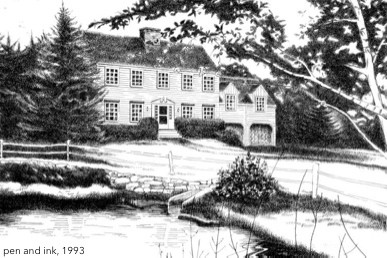 Despite all of those complications, the most revealing and heartbreaking trial of all was yet to come. From the time she was very young, drawing had come naturally, but now Elaine was about to discover that she had lost the ability to hold a pen. What she had done so naturally and so well for more than sixty years was now impossible. She would no longer be able to sketch or paint with the ease and skill she once had. That means of self-expression, that talent she had honed and practiced, was gone. Now she could not even sign her name. For the first time in all of those painful months, she wept. But God gave her hope through his Word: “Consider it pure joy, my brothers and sisters, whenever you face trials of many kinds, because you know that the testing of your faith produces perseverance. Let perseverance finish its work so that you may be mature and complete, not lacking anything.”

One Who Knows Joy 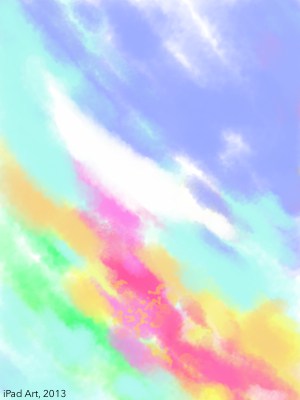 In 2008 Elaine was moved to Toronto East General Hospital where she lives today. Both of her children and their families are only a block away. She discovered that an iPad and an app called Brushes allows her to express herself artistically. All she needs to paint on that iPad is one finger, rather a good thing because one working finger is all she has! With that same finger she can type emails, check Facebook, and surf the web to satisfy her insatiable curiosity.

Those who know her, and those who spend time with her, attest to her strength, to her love, to her perseverance. A deep and sweet spiritual maturity has developed within her, not despite, but through her suffering. Where her body grows weaker and weaker, her spiritual strength continues to grow. She is a model of godly, joyful endurance. She knows joy because she knows the Source of joy. Recently she wrote,

Christ is with me always—his Holy Spirit lives in me. I must admit I am feeling rather battle-worn, but trust God is using me for his purpose. We live in a broken world that is full of disease and tragedy and we can’t escape this, but we can trust God to help us through it. One day, Jesus will return and there will be a new Heaven and a new Earth and all will be well.

It was my faith in him that got me through this tough time. I have the promise of eternal life. There will be no more tears and my body will be whole again. That makes this time not only bearable, but enjoyable. Christ has given me strength, contentment and so much more—I’m alive! I have a lovely family which includes three beautiful grandchildren; my sisters; dear old friends; great nurses who care for me around the clock; a fantastic physician who listens to me and loves to laugh; a private room that is full of my favourite things and has a wide view of God’s glorious creation. There is my faithful pastor and friend, Howard McPhee, whose visits always include laughter, Scripture and prayer. And every Sunday morning I watch a televised church service with awesome sermons by Charles Price. There is nothing more to need.

A short time ago my mother visited Elaine and asked how she deals with all that she has suffered. Elaine looked at her quizzically and said, “But I don’t feel like I have suffered.” She acknowledges that she has endured great challenges and great physical pain, but she cannot and will not see herself as essentially a sufferer. She knows Jesus Christ and him crucified and now waits patiently and joyfully for the day when her body, soul and mind—all she is—will be perfected in his presence. “He will wipe every tear from their eyes. There will be no more death or mourning or crying or pain, for the old order of things has passed away” (Revelation 21:4).