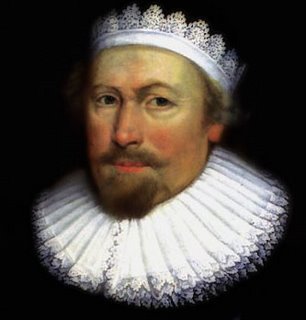 Today I continue this new Sunday series entitled “The Puritans.” I have a growing fascination with Puritan writing and decided it might be valuable to introduce you (and me!) to some of the most important Puritan writers. I will focus primarily on men whose works I have read in the past. Because I do not have the expertise to introduce the men or their work, I will be relying on experts like Joel Beeke and J.I.Packer to guide me. This week we meet Richard Sibbes.

Richard Sibbes was born in 1577 in the village of Tostock, Suffolk. He loved books as a child, even though his father, who was reportedly a “good, sound-hearted Christian,” was not happy about it. Being a wheelwright, he bought his son tools to take up the trade himself; but his interest in books won out, and at age 18 Sibbes entered St. John’s College.

In 1603, a year after graduating with his Masters, Sibbes was born again under the preaching of Paul Baynes, his “father in the gospel.” Five years later, Sibbes himself entered into the preaching ministry.

From 1608 until his death, Sibbes would hold preaching positions at numerous locations throughout England, most notably at Gray’s Inn in London and Holy Trinity in Cambridge. He also served as master of St. Catharine’s College for a season.

Sibbes’ noteworthy preaching–his most lasting legacy–appealed to Christians across the denominational spectrum and gave him a wide influence. He also maintained a large and diverse network of friends, including a number of politicians and fellow ministers (as seen in the fact that he authored at least 13 introductions for works written by other Puritans).

After a full and fruitful ministry, Sibbes passed away on July 5, 1635.

(I know what you’re thinking: What’s with the crown and collar? Truth be told, I’ve got no idea. But I’m kind of jealous.)

Sibbes is remembered most of all for his persuasive, Christ-centered preaching. “To preach is to woo,” he wrote. “The main scope of all [preaching] is, to allure us to the entertainment of Christ’s mild, safe, wise, victorious government.”

Beeke and Pederson quote the historian William Haller as saying that Sibbes’ sermons were “the most brilliant and popular of all the utterances of the Puritan church militant.” Even today Mark Dever makes it his habit to read Sibbes’ sermons aloud and to invite his church to listen along.

If you are going to read just one of Sibbes’ works, make it The Bruised Reed. This is an encouraging and pastoral book that will encourage you with the Lord’s love for you.

Among his collected works, the most enduring are