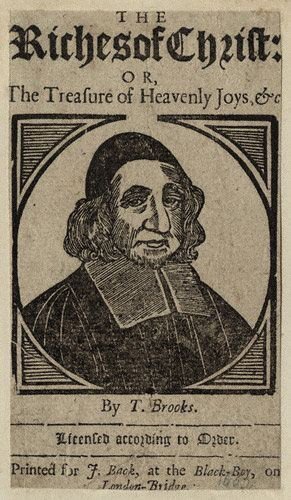 Today I continue this new Sunday series entitled “The Puritans.” I have a growing fascination with Puritan writing and decided it might be valuable to introduce you (and me!) to some of the most important Puritan writers. I will focus primarily on men whose works I have read in the past. Because I do not have the expertise to introduce the men or their work, I will be relying on experts like Joel Beeke and J.I.Packer to guide me. This week we meet Thomas Brooks.

We do not know a whole lot about Thomas Brooks’ early life. He was born in 1608 and he entered college at Cambridge in 1625. It is uncertain whether or not he ever finished his degree; nevertheless, in 1640 he was ordained to the ministry in the Church of England and became a chaplain in the English navy.

His years at sea were apparently very rich. He said of them, “through grace I can say that I would not exchange my sea experiences for England’s riches.”

After returning to London in 1648, Brooks served at St. Thomas the Apostle church and then at St. Margaret’s. But in 1662, with the passage of the Act of Uniformity (which required all Anglican ministers to conduct prayers, sacraments and other aspects of church in the same way–an agreement Brooks could not make), he lost his ministerial license and position. He was able to regain his license in 1672 with the passage of the Declaration of Indulgence, but then lost it again in 1676.

Despite the legal battles over his license, Brooks continued to preach and minister throughout London with little persecution. When the Great Plague hit London in 1665, he, unlike many other ministers, remained in the city to care for the saints.

He was married twice. His first wife, Martha, whom he dearly loved, died in 1676. He afterwards married a notably younger woman, Patience, before his own passing in 1680.

Brooks is remembered most for his ability to preach messages that were simple and practical, yet full of spiritual life, Scripture, and the power of God.

Charles Spurgeon was a great fan of Brooks’ teaching. He even took it upon himself to compile an entire book of sayings and illustrations by Brooks, which he cleverly titled Smooth Stones Taken from Ancient Brooks (I had not noticed the pun before today!). In the preface, Spurgeon writes,

Had Brooks been a worldly man, his writings would have been most valuable; but since he was an eminent Christian, they are doubly so. He had the eagle eye of faith, as well as the eagle wing of imagination. He saw similes, metaphors, and allegories everywhere; but they were all consecrated to his Master’s service.

If you read just one of Thomas Brooks’ books, make it Precious Remedies Against Satan’s Devices. I read it recently and cannot even tell you how much I enjoyed it and how important it was to me.

The Secret Key to Heaven: The Vital Importance of Private Prayer