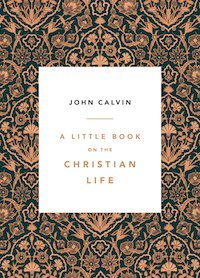 There are far more Calvinists in the world than there are people who have actually read the works of John Calvin, or even dabbled in them, for that. Of course the latter is not a prerequisite to the former, but those who never read any of Calvin’s works are denying themselves a blessing and perhaps even a surprise. For while his name is attached to an expansive system of theology, he is a theologian who does not merely fill the head, but one who also warms the heart and informs the hands. Never do we see this more clearly than in A Little Book on the Christian Life.

What would become that Little Book first appeared in 1539, in the Latin second edition of Calvin’s magnum opus the Institutes of the Christian Religion. At that time it was a chapter titled De vita hominis Christiani (on the life of the Christian man). Readers quickly identified that it could stand apart from its context and be a powerful little booklet in its own right. Since then, it has been translated and published in many forms and under many names. Unfortunately, its English editions have often been truncated or of dubious quality.

That was the case until Aaron Denligner and Burk Parsons determined they would craft a new translation. “Our aim in completing this project has generally been to produce a translation that we believe Calvin himself would have been pleased with. We have, in other words, aimed at faithfulness not just to Calvin’s meaning but, so much as possible, to his words.” In doing so, they have produced a gem of a book. It maintains the strength and tone of the original content even while providing it in a new language.

A Little Book on the Christian Life is composed of just five short chapters. But each of these short chapters packs a punch. In the first, Calvin discusses Scripture’s call to Christian living, telling that “the goal of God’s work in us is to bring our lives into harmony and agreement with His own righteousness, and so to manifest to ourselves and others our identity as His adopted children.” In the second chapter, he turns to the importance of self-denial in the Christian life, showing “it is the duty of believers to present their bodies as living sacrifices, holy and acceptable to God. And in this consists genuine worship of him.” Great progress in the Christian life is displayed when “we nearly forget ourselves, that in all matters we hold our own concerns in less esteem, and that we faithfully strive to devote our energies to God and His commands.”

The third chapter is concerned with the Christian duty of bearing the cross while the fourth turns to meditations on our future life, for “in whatever trouble comes to us, we should always set our eyes on God’s purpose to train us to think little of this present life and inspire us to think more about the future life. For God knows well that we are greatly inclined to love this world by natural instinct. Thus, He uses the best means to draw us back and shake us from our slumber, so that we don’t become entirely stuck in the mire of our love for this world.” The final chapter is the shortest and tells how the present life and its comforts should be used. “If [God’s people] are merely passing through this land, then without doubt they should make use of its goods only insofar as they aid rather than hinder their journey.”

Though short in length, this little booklet is full of wisdom for guiding the Christian’s journey. It’s a book that will benefit any and every Christian. It is short enough to read quickly and full enough to re-read often.

I’m convinced we are living in a golden age of publishing. Readers are being served with new works written here in the twenty-first century and, perhaps even more importantly, with classics from days gone by. This little book is deservedly one of those classics and I’m grateful to Denligner and Parsons for allowing today’s Christians to rediscover it. I pray that it blesses us just as it blessed many of our forebears. I am confident it will.