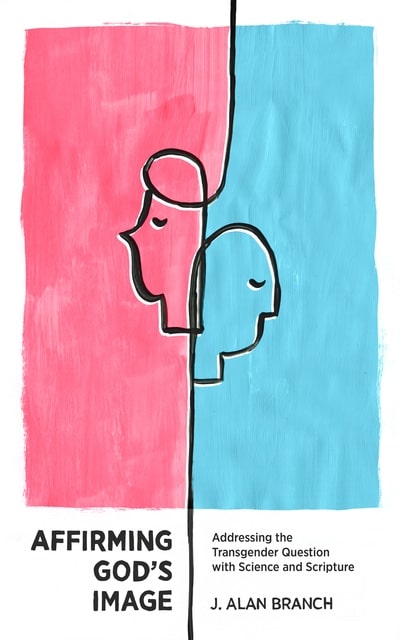 It’s sometimes amazing to consider how quickly societal mores change, how quickly an idea can go from unthinkable to acceptable, from having great social stigma attached to its acceptance to having even greater social stigma attached to its rejection. There may be no better example of this than transgenderism. Less than a generation ago, few would have dared suggest that there is no necessary link between biological sex and gender identity. Today, though, it is commonly believed that a person with a female body may actually be a man or a person with a male body may actually be a woman. In fact, those who believe otherwise are considered bigoted and hateful. And in this context, Christians rightly ask, What does the Bible say about this? What should Christians believe about it?

This is the subject of a short but powerful new book by J. Alan Branch titled Affirming God’s Image. The purpose of his book is made clear in the subtitle: Addressing the Transgender Question with Science and Scripture. He makes it equally clear what audience he had in mind as he carried out his research and wrote his words. “My intended audience is sincere Christians seeking to understand the modern phenomenon of transgenderism.” Therefore, this is not a book meant primarily to hand to a skeptical friend or, even more, to someone who is transgendered. Though it may bring some benefits in such uses, they do not quite meet its purpose. Rather, it is meant to inform Christians about the growing transgender debate and to show Christians how the Bible speaks to the issue.

1) Embracing transgender identity should be celebrated; 2) God is actually behind one’s transgender identity; 3) People claim to have a female soul trapped in a male body, or a male soul trapped in a female body; 4) If you love children, you will agree with the avant-grade stand regarding transgenderism; 5) It is a noble and brave thing voluntarily to go through extensive surgery to transform one’s gender appearance; 6) Such an experience is liberating.

His basic argument is that transgenderism is not a trait like hair or skin color, but instead an identity that is rooted in a number of causes and completely inconsistent with Christian ethics. This isn’t to say, of course, that Christians should be anything less than loving toward those who disagree or compassionate to those who claim to be transgendered. Yet Christians must also know what the Bible says and be willing to affirm it, no matter the cost.

Branch begins with a brief history of transgenderism, showing that while there may have been some transgender-like behavior in the past, this modern-day phenomenon is, well, distinctly modern. In the form we know it know, it grew out of the early twentieth century, joined with the sexual revolution, and now marks the ultimate rejection of Judeo-Christian sexual ethics. He concludes that, according to the Christian worldview, “there is no such thing as a man trapped in a woman’s body or a woman trapped in a man’s body: These concepts originate in misleading language games fostered by wrongheaded ideas rooted in deconstruction.”

Next he introduces the vocabulary of transgenderism, carefully defining the common terms—something that matters to those who want to accurately understand the issue and know how to engage it. Here you’ll find your introduction to terms like “cisgender” and “genderqueer” and “gender identity.” Having laid this groundwork, he turns to the Bible to critique transgenderism, then discusses arguments people use to claim that people are born transgender. He spends some time discussing the actual process through which people attempt to transition from one gender to another—puberty blockers, hormone therapies, gender reassignment surgery, and so on. And then, as the book draws near to its end, he addresses practical issues related to the family and the local church.

As he does all this, he takes a clear stand. “Transgenderism is not consistent with a life of Christian discipleship. A robust understanding of Scripture insists we embrace our natal sex and live in accordance with that sex: In other words, to use the secular distinction, we strive to embrace the gender consistent with our sex. Imitating the opposite sex is strictly forbidden. Likewise, participation in homosexual behavior is sin.”

Branch says in his introduction that he means to “join conviction with compassion” and he does this well. He is fair, he is respectful, he is understanding, but he never waves from his biblically-informed convictions. He combines all that into a book that serves as a strong and trustworthy guide to one of the most pressing issues of our day. Affirming God’s Image will serve individual Christians well and it will serve churches well. I am glad to recommend it.