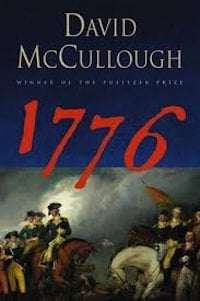 Buy from Amazon
I have only elementary knowledge of American history. This is shameful, really, as in high school and university I took at least two courses on American history and did quite well in them as memory serves. Still, somehow I have forgotten much that I ought to know. Popular history, books written about periods of the past but written in a narrative fashion rather than as dry history, have proven useful in refreshing my memory. Nathaniel Philbrick’s Mayflower reminded me of the first days of the American colonies, and I have followed that with David McCullough’s 1776 which tells the story of what is easily the most pivotal, important year in America’s long and storied history.

Though it takes place during the war for independence, and though it concerns that conflict, 1776 is not a history of the war. Rather, it deals with a small slice of the wider campaign. Yet this year, being so pivotal, mirrors the course of the war, for it began with defeat and retreat, but ended with great victories. Though the American forces managed to avoid full-scale battles, they showed their commitment to the ideals of independence through a series of smaller but still important battles.

The book begins in England near the close of 1775. George III, King of England, stands before Parliament and declares the colonies to be in rebellion. “I need not dwell upon the fatal effects of such a plan. The object is too important, the spirit of the British nation too high, the resources with which God hath blessed her too numerous, to give up so many colonies which she has planted with great industry, nursed with great tenderness, encouraged with many commercial advantages, and protected and defended at much expense of blood and treasure.” And so he committed his forces to furthering the conflict and to crushing the opposition.

The closing pages of the book relay King George’s words at the opening of the next year’s Parliament. “Nothing could have afforded me so much satisfaction as to have been able to inform you … that my unhappy people [in America], recovered from their delusion, had delivered themselves from the oppression of their leaders and returned to their duty. But so daring and desperate is the spirit of those leaders, whose object has always been dominion and power, that they have now openly renounced all allegiance to the Crown, and all political connection with this country … and have presumed to set up their rebellious confederacies for independent states. If their treason be suffered to take root, much mischief must grow from it.” The war was not over and there would be much blood still to shed.

Because of the narrow scope of the book, the narrative does not extend to the close of the war. Do the Americans win the war, or are they driven further and further west until they have to admit defeat? Do the British eventually cut their losses and give up on their colony, or do they own them still? And what happened to George Washington? Did the legend of the man extend past 1776 or were his best days already behind him? While these answers are obvious, I almost wished that the book had continued, at least to summarize the remaining years of the war. But, of course, this would defeat the purpose of writing a book with the limited objective of covering a single year.

1776 is popular history at its best. It is easy to read, yet filled with information. It tells the story of an important period of time in a way that is accessible to those who may not wish to read a scholarly treatment of the same material. It is long enough to be thorough, but short enough to avoid being overwhelming. It is good to see both Mayflower and 1776 on the bestseller lists at the same time. Both deserve the honor; both are worthy of a spot in your library.