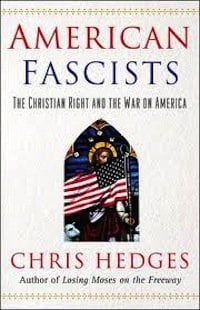 Buy from Amazon
I’ve read the books of today’s leading atheists—Hitchens, Harris and Dawkins. I’ve read their books and know all about their reasons for hating Christianity and despising the very idea of God. They’ve all sold millions of books and have all traveled the world with their message that God and His followers are what’s most wrong with the world. But I don’t know that anyone of them ever sounded so irrational and so ignorant as Chris Hedges (and, if you’ve read their books, you’ll know that this is saying something!).

Chris Hedges, a long-time correspondent for The New York Times and apparently a Liberal Christian, hates the Christian right, believing that it is in the midst of waging on America. He has seen this war coming for some time and feels as if he needs to speak out. Though he directs his vitriol at “radical Christians” or the “Religious Right,” he seems to define a radical Christianity as one that really just takes the Bible seriously. He has sympathy for those who regard the Bible as a flawed but useful guide to morality, but none for those who believe it to be a normative standard for life and faith. Radical Christians, the objects of this book, are really all Christians. Nowhere does he make the careful, deliberate and important distinctions that would delineate mindless radicals from rational believers. He just tosses them all together and levels both barrels.

Probably the strangest and most ironic aspect of the book is that Hedges, who lauds reason and fairness, seems willing to constantly violate his own standards. As another reviewer has aptly stated: “Hedges incessantly declares ‘rational, dispassionate, scientific analysis’ his standard for all thought and action yet uses inflammatory, demonizing, unsubstantiated language throughout. I constantly felt like Action T4 was about to be implemented – with Christians heading Hedges’ list of impediments to his Uberliberal Reich.”

Here is a sampling of what the reader will encounter and what he’ll learn in American Fascists:

“Dominionists wait only for a fiscal, social or political crisis, a moment of upheaval in the form of an economic meltdown or another terrorist strike on American soil. to move to reconfigure the political system.”

“The split in America, rather than simply economic, is between those who embrace reason, who function in the real world of cause and effect, and those who, numbed by isolation and despair, now seek meaning in a mythological world of intuition, a world that is no longer reality-based, a world of magic.”

“What is happening in America is revolutionary. A group of religious utopians, with the sympathy and support of tens of millions of Americans, are slowly dismantling democratic institutions to establish a religious tyranny, the springboard to an American fascism.”

“Doubt is a sin. Questioning is a sin. The only proper relationship is submission to those above you, the abandonment of critical thought and the mouthing of religious jargon that is morally charged and instantly identifies believers as part of the same, hermetic community.”

“The hyermasculinity of radical Christian conservatism, which crushes the independence and self-expression of women, is a way for men in the movement to compensate for the curtailing of their own independence, their object obedience to church authorities and the calls for sexual restraint.”

“The danger of creationism is not that it allows followers to retreat into a world of certainty and magic—what it does—but that it allows all facts to be accepted or discarded according to the dictates of a preordained ideology. Creationism removes the follower from the rational, reality-based world.”

“It is the duty of the Christian foot soldiers to bring about the Christian utopia. When it is finished, when all have been stripped of legal and social protection, it will be too late to resist. This is the genius of totalitarian movements. They convince the masses to agitate for their own incarceration.”

“When there is no other place to turn for help other than the world of miracles and magic, mediated by those who grow rich of those who suffer, when fealty to an ideology becomes a litmus test for individual worth, tyranny follows.”

“This movement is bent on our destruction.”

“The radical Christian Right calls for exclusion, cruelty and intolerance in the name of God.”

And so it goes, though thankfully for only 200 pages. The pattern is established early on: half-mad, unsubstantiated ranting and unfair, biased descriptions through the first ninety five percent of the chapter with a summary of what it all means and why it is so dangerous in the final few paragraphs. It’s tiresome, it’s ridiculous, and it’s just so utterly irrational. Like many of today’s foremost atheists, Hedges can say nothing positive about Christianity. It is all, entirely evil, it seems. We’ll claim that Christians desire a return to slavery while ignoring that they paved the way for its abolition. We’ll claim they are all greedy while ignoring the innumerable sacrifices by Christians for the poor and disadvantaged. We’ll ignore all the good they do, and paint them instead with a broad, hyperbolic brush. Reason most not sell books or foster invites to the talk shows.

If you are a Christian I am sure you won’t recognize yourself in the pages of American Fascists. The honest and thoughtful reader will have to admit the same.