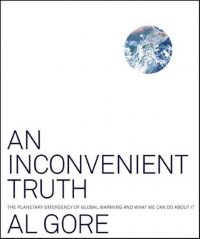 There is a great deal of controversy surrounding global warming. Some insist that it is a terrifying and imminent concern that portends worldwide disaster. Others scoff at the notion, accusing those who spread such dire predictions of using global warming as part of a larger, sinister agenda. Al Gore considers global warming to be an inconvenient truth and a pending planetary emergency. In his political career he was an advocate of measures to deal with this and other environmental crises, and in his post-political career he has accelerated these warnings. An Inconvenient Truth, an immediate New York Times bestseller, and the film that was released at around the same time, are his attempt to take this message to the masses.

An Inconvenient Truth is an oversize paperback book which contains predominantly photographs. “It was Tipper who first suggested that I put together a new kind of book with pictures and graphics to make the whole message easier to follow, combining many elements of all the new original material I have compiled over the last few years… My hope is that those who read the book and see the film will begin to feel, as I have for a long time, that global warming is not just about science and that it is not just a political issue. It is really a moral issue.”

The introduction contains exactly what we would expect from Al Gore. He trumpets his concern for the environment and his accomplishments in this area, while criticizing the Bush administration for its lack of environmental concern. He quotes Martin Luther King, mentions AIDS and Hitler and, in veiled terms, compares Bush’s apathy towards global warming to the appeasement tactics of Neville Chamberlain. The book then begins to present Gore’s case for the threat of global warming. He uses many beautiful pictures showcasing the beauty of creation, and just as many sickening pictures showcasing the negligence of human beings. He presents multitudes of graphs and charts. But strangely and noticeably absent from the book is any kind of substantial proof. There is not a single footnote or endnote to be found. Nor is their any serious consideration of those who have studied the same evidence and reached different conclusions. Gore presents global warming as fact and as fact accepted by the almost unanimous consent of qualified scientists. In a section answering the ten most common misconceptions of global warming, Gore repeats what he writes elsewhere: “Scientists overwhelmingly agree that the Earth is getting warmer, that this trend is caused by people, and that if we continue to pump greenhouse gases into the atmosphere, the warming will be increasingly harmful.” While some of this is fact, the extent of the danger and the extent that humans are causing this warming trend are hotly disputed among credible and knowledgeable scientists. The case is not nearly as settled as he would have us believe.

One of the great frustrations with this book is that all evidence, no matter how contradictory, is used to prove the existence of global warming. Global warming is blamed for flood and drought, heat and cold, freezing and melting, thick ice and thin ice. The mounting evidence that would seem to contradict Gore’s thesis is either ignored or reinvented to prove it. Also, for a book dealing with the environment, this one contains a great many uses of the word “I.” The book is, in fact, partly autobiographical, for Gore discusses events in his life that shaped his passion for the environment. It is more than a little bit self-congratulatory and more than a little uncharitable to those who reach opposite conclusions.

Despite these frustrations, the book is not without value. Many of the facts presented are worthy of deep consideration. The book’s final section contains information on what you and I can do to solve the climate crisis. While some may not believe in the immediate extent and danger of the crisis, there are many good and common sense suggestions to be found here. There are many suggestions that will help us become better stewards of the earth. Pictures and descriptions of the devastation caused by humans should give us all reason to think deeply about our responsibility to this planet.

While the book contains only brief and vague references to God, Gore does affirm his belief that God created this world. He feels God did so, though, through the means of evolution. Beyond this he provides little explanation as to how God may have created the world or what God’s ongoing involvement is. He certainly does not discuss one of the great contradictions between those who believe in evolution and those who believe in creationism. Evolution teaches that humans, while we may be the most intelligent and capable form of life in the world at the moment, are merely as we are because of the long and random process of evolution. We were apes in the past and may evolve into some other form of life in the future. Our source is little different than the source of any other form of life. The Bible, however, teaches that God deliberately made us as we are today and that our source is God Himself. We are made in His image and He gave us this earth to tend and to keep. We are not the same as the earth and not subordinate to it. Rather, we are high above it as the only creatures made in the image of God. It is the Bible, and not evolution, that provides the moral basis for tending to the earth. I don’t see how it is possible for an evolutionary worldview to posit a moral responsibility to the earth.

Those who hold dear the Bible ought to be the first to protect the earth, for it was made by God and was given as a gift for our enjoyment. We were told, and still are told, to tend and to keep it. We are responsible for protecting it from harm. I am not convinced that the case for global warming is as clear as Gore would have me believe. Still, I believe we need to protect this world for it has been given to us in trust. The earth is a finite resource and one we ought to treasure, for it displays the glory of God. This book could have been much better, if only Gore hadn’t skipped over so many facts that were inconvenient to his arguments.