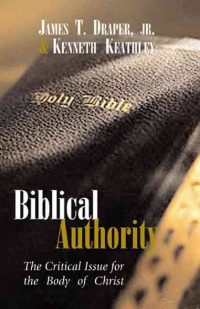 The authority of Scripture is, as this book indicates, a critical issue for the body of Christ. Much of the ground that was gained during the Protestant Reformation has been lost in the past few decades. There has been a dramatic shift among Protestants away from biblical authority. James Draper and Kenneth Keathley, both Southern Baptists, have seen this fight up close and personally from within the Southern Baptist Convention, so are well-versed in the arguments and in what is at stake.

Through eight chapters and 144 pages, the authors provide the background for the fight to maintain the authority of Scripture, both in church history and Baptist history. They then turn to the Scripture itself and teach what the Scriptures says about itself. They close by predicting the next major battle that will be fought after the issue of authority is settled and provide a challenge for all believers, but for Southern Baptists in particular.

While dealing with the authority of Scripture, the authors also write about other topics important to the doctrines of Scripture: inspiration, infallibility, inerrancy and sufficiency. While they cover each topic only briefly, they provide all the information necessary for anyone to understand the issues and the importance of this doctrine.

Biblical Authority is a short but thorough book, and one that is clearly geared towards the layperson more than the scholar. This is a book that any Christian would do well to read. For the church to thrive and to fulfill it’s God-given task, we must affirm that the Bible is our full and final authority. This truly is a critical issue for the body of Christ to face.