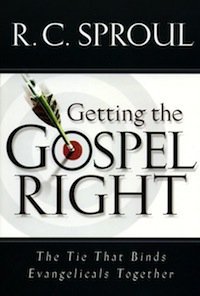 “Getting The Gospel Right” is R.C. Sproul’s sequel to the popular book “Faith Alone: The Evangelical Doctrine of Justification” and is a thorough treatment of the subject of Christian unity. It is essentially a response to a document that tested the boundaries of unity between Roman Catholics and Evangelical Protestants: “The Gift of Salvation” (also known as ECT II) which was released subsequently to the original “Evangelicals and Catholics Together.” These documents were both written and signed by leading members of Evangelical and Catholic churches as a means to promote unity between the churches. They chose to find common ground and unite on that basis rather than focus on the differences that separated them. Sproul and several other prominent Reformed Christians stood against this document, insisting that it did not form an adequate basis for unity with the Roman Catholic Church.

The book is divided into three sections. The first is entitled Controversy Concerning The Gospel and provides background to the importance of Christian unity in traditional Evangelicalism. The section functions almost as an introductory course to Christian doctrine regarding unity. Among other topics it discusses the distinction between the visible and invisible church, the marks of a true church and Christ’s desire for unity.

In the second section Sproul provides the complete text to “The Gift of Salvation” and then provides a thorough examination of each paragraph. His amazing depth of knowledge allows him to delve deeply into the document and point out many problems with it. He shows where the language is ambiguous and goes into lengthy explanation about the differences between the Catholic and Protestant views on soteriology. His conclusion is that the two systems of theology are so far removed that they cannot be brought into harmony. “The Gift of Salvation” does nothing to remove the doctrinal chasm created by the simple word “alone.” Until Rome concedes on the “solas” of the Reformation, there can be no unity. Further, unity on such terms as outlined in this document is damaging to the Evangelical churches as it undermines critical theology. There can be no unity without unity in the gospel, which means there certainly cannot be unity at the expense of the gospel. The unity expressed by the signatories of “The Gift of Salvation” is empty since it denies the importance of obvious and insurmountable differences in doctrine.

The final section is an examination of a document drafted by Sproul and other leading theologians entitled “The Gospel of Jesus Christ.” They feel this document should provide the basis for unity among Evangelicals. “The Gospel of Jesus Christ” carefully and consistently lays out the foundations of Protestant theology, leaving absolutely no room for ambiguity. As with the previous document, Sproul examines it paragraph by paragraph, explaining the meaning and importance of each of the affirmations and denials. Sproul says that “[the affirmations and denials they list] are the foundation that expresses the mission of the church. For the church to be faithful to the Great Commission, we must get the gospel right. When we do, we will both energize the church’s activity and encourage deep and abiding unity among Evangelicals.”

This book is as good a treatment of the subject of unity as I have read. While deeply theological, it is also very readable. Sproul has a gift for presenting deep truths in a way that is easy to understand. I recommend this book to anyone interested in learning what the Bible says about unity, and further to people interested in an overview of the doctrinal differences between Protestants and Catholics.