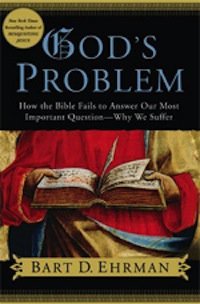 Bart Ehrman is a New Testament scholar who chairs the Department of Religious Studies at the University of North Carolina at Chapel Hill. He has both an M.Div. and Ph.D. from Princeton Theological Seminary where he studied under the renowned scholar Bruce Metzger. Though he formerly considered himself a Christian and even pastored a church, he is now an avowed agnostic. Much of Ehrman’s career has been dedicated to attempting to prove that history has been incorrect in suggesting that it was heretics such as Marcion who were responsible for tampering with the original texts of the Bible. He suggests and attempts to prove that it was those who professed faith in Christ who sought to change the Scripture to force it to adapt to their beliefs. In the past decade he was written extensively, though the bulk of his work has been directed at the academy, as shown by such intimidating titles as The Orthodox Corruption of Scripture: The Effect of Early Christological Controversies on the Text of the New Testament. But in recent years Ehrman has begun to write on a more popular level and has done something very unlikely—he has sold millions of books. At one point last year he had no less than three books on the bestseller lists.

It looks as if Ehrman is poised to repeat the success of Misquoting Jesus, his previous bestselling book, with his most recent title, God’s Problem: How the Bible Fails to Answer Our Most Important Question—Why We Suffer. It is a book that adopts an intimate, personal tone and one that is very nearly autobiographical. As an agnostic rather than an atheist Ehrman comes across as more human and more vulnerable than many of today’s popular atheist authors. Ehrman insists he does not hope to persuade people to de-convert from Christianity. Rather, he simply wants to show how the Bible cannot address the issue of suffering—the very issue that convinced him to abandon his Christian beliefs. He does not display the bravado we’ve become accustomed to from those who seek to lead people away from Christianity. He states, for example, that even many years after leaving the faith, the possibility of hell continues to trouble him and that there are still nights where he wakes up in a cold sweat. He writes as well of how much he misses being able to offer thanks for all the good things in his life. As an agnostic he has no one to whom he can offer thanks and this is clearly a sad void in his life. There is something almost tragic in reading about his life after God.

But beyond the story of wrestling with issues of suffering and eventually leaving the faith is an assessment of how the Bible describes suffering. Ehrman looks to Scripture and offers several answers provided within the Bible: that suffering is punishment for sin; that it is a consequence of sin; that it is redemptive; that it makes no sense whatsoever and that it is apocalyptic. In most cases he spends most of a chapter simply quoting Scripture and quite accurately summarizing the Christian position. At the end he expends a few paragraphs in explaining why he feels this position cannot provide an adequate answer. And the critical reader will have to realize here that in his analysis Ehrman refers to no authority other than his own. He assumes that if he is unable to see any purpose to suffering or if he is unable to understand a particular reason for suffering, it must be false. All he is able to offer are his subjective opinions and contextualized understandings.

The reader will also note that the entire book is tainted by the presuppositions Ehrman brings to bear on the text of the Bible. Time and time again we read statements like, “Scholars now realize…” or “Today scholars understand…” He offers little proof beyond such sweeping statements and refuses to acknowledge that scholarship is rarely as unanimous as he would like us to believe. The scholars he approves—those who share his presuppositions about the text of Scripture—would no doubt share his viewpoint. But there is hardly wide agreement about many of the issues upon which Ehrman constructs his case. He chooses to ignore the weight of all scholarship that contradicts what he believes. Little wonder, then, that he arrives at many of these conclusions. Though he may take it as a given that Job is the product of two authors and that Isaiah offers no foreshadowing of the death of Jesus Christ, multitudes of legitimate scholars will disagree.

As the book comes to a close, Ehrman shares his view that suffering is simply meaningless. “What we have in there here and now is all that there is. We need to live life to its fullest and help others as well to enjoy the fruits of the land.” He suggests that the proper response to suffering is not to attempt to understand it, but to attempt to alleviate it. Yet he imposes on the reader a kind of morality that is baseless. How can anyone who denies the existence of God legitimately proclaim “oughts?” On what basis ought we alleviate suffering? Without God there is no consistent basis for morality. Ehrman wishes to have his cake and to eat it too. He wants to deny God but to enjoy the benefits of the moral standards that arise from God. But he cannot rightly have it both ways.

Ultimately, and though the issue of suffering is very important and one to which Christians are prone to offer unsatisfying and trite answers, Ehrman largely ignores an even bigger question. He focuses on understanding why we suffer, but does not look through a wider lens to understand why there is such a thing as suffering in this world in the first place. Only when we understand why suffering exists at all are we equipped to ask why we suffer in particular circumstances. When we understand that suffering is a direct result of human rebellion against God, only then are we properly equipped to understand that suffering may have many ends and that it may accomplish many purposes. When we understand that God is in control of this world, we realize that there is no such thing as meaningless, purposeless suffering. Everything that happens does so under the sovereign control of a good and just God.

I enjoy reading Ehrman’s books. He has almost encyclopedic knowledge of the Scripture. He shares more of the Bible in the pages of this book than in almost any other book I’ve ever read. He knows its structure, knows its purpose and knows its languages. He knows far more about the Bible than the vast majority of Christians. Yet, at the same time, he knows far less about Scripture than even many children. In a classic case of missing the forest for the trees, he dedicates his life to studying and teaching Scripture, all the while missing its most important and deepest truths. What a tragedy.