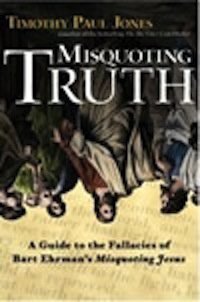 Become a Patron
Bart Ehrman’s Misquoting Jesus was a surprise bestseller. Released in late 2005, it quickly climbed its way onto the bestseller lists–an interesting feat for a book dealing with textual criticism. Ehrman is a renowned New Testament scholar and chairs the Department of Religious Studies at the University of North Carolina at Chapel Hill. He has both an M.Div. and Ph.D. from Princeton Theological Seminary where he studied under Bruce Metzger, one of the pioneers of textual criticism. Though he once claimed to be a Christian and even attended Moody Bible Institute, he has since renounced the faith and is now agnostic. Much of Ehrman’s career has been dedicated to proving a rather unorthodox thesis: that history has been incorrect in suggesting that it was heretics such as Marcion who were responsible for tampering with the texts of the Bible. Rather, he suggests and attempts to prove, it was those who professed faith in Christ who sought to change the Scripture to force it to adapt to their beliefs. In the past decade he was written extensively, though the bulk of his work has been directed at the academy, as shown by such intimidating titles as The Orthodox Corruption of Scripture: The Effect of Early Christological Controversies on the Text of the New Testament. It is somewhat surprising, then, to note that in the past year his named has adorned the covers of no less than three books on the New York Times bestseller’s list.

The book that has sold the most copies, Misquoting Jesus: The Story Behind Who Changed the Bible and Why, is Ehrman’s recent attempt to popularize his thesis, as it is written at a popular level, attemping to engage a person with no prior knowledge of the history of the Bible. He seeks to show that a combination of scribal mistakes and deliberate tampering shaped the Bible we read today. This book is written, he says, “for people who know nothing about textual criticism but who might like to learn something about how scribes were changing scripture and about how we can recognize where they did so.” By the close of his book Ehrman leaves the reader with a Bible that is only a human book, written by and for humans without the intervention of God. There is no inspiration and certainly no inerrancy. It is an important historical text, but little more than that. This hardly a radical conclusion for our day, of course, and it is one that many readers are only too eager to believe. But it is a conclusion that is at odds with Scripture itself and which makes Christianity a religion based upon a lie. It leaves Christians as people of a book that does not deserve our attention or affection.

Ehrman’s book and the claims he makes are the subject of Timothy Paul Jones’ Misquoting Truth: A Guide to the Fallacies of Bart Ehrman’s Misquoting Jesus. The stakes are high. “If Ehrman’s conclusions about the biblical text are correct, there is little (if any) reason to believe that my copy of the New Testament accurately describes anything Jesus said or did.”

Jones does not respond to every charge Ehrman makes, but instead focuses in on the two main arguments. In the first part of the book he shows why the texts can be trusted and in the second he looks at why the lost Christianities were lost (which is to say that the theology of the New Testament is the theology of Jesus and His Apostles). He shows that what Ehrman says is really nothing new, but simply old scholarly arguments rehashed in a fresh format. “Despite the description of Bart Ehrman as ‘a new breed of biblical scholar,’ most of what Ehrman has to say isn’t new at all. The concepts in his books have been current among scholars for decades. What Ehrman and his editors have done is rework these scholarly conclusions for mass consumption, simplifying the concepts and sensationalizing the titles.”

While textual criticism is generally a subject for scholars, Jones matches Ehrman’s tone and style, keeping the book informal and at a level that will appeal to a more casual reader. He interjects serious discussion with anecdotes, humor and words of personal testimony (and quite a few references to Star Wars). Yet he answers thoroughly and in a way that will show that so many of Ehrman’s charges are spurious at best, malicious and infeasible at worst.

Reading a book like Misquoting Jesus it is easy to follow the author’s argument and to begin to believe it. Because the book is written “for people who know nothing about textual criticism,” most readers can quickly be swept away. I’m grateful that men like Timothy Paul Jones take the time to respond to these charges, showing conclusively that not only are Ehrman’s arguments far from original, they are also, quite simply fallacious. They can be satisfactory refuted and we can have full confidence that the Bible we know and love today is the Bible as God intended us to have it. If you’ve read Misquoting Jesus (and perhaps even if you haven’t) you’ll want to read Misquoting Truth as well.