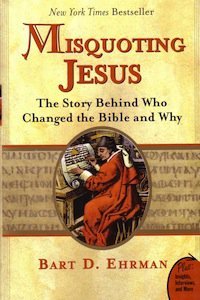 Bart Ehrman is a highly-regarded New Testament scholar and chairs the Department of Religious Studies at the University of North Carolina at Chapel Hill. He has both an M.Div. and Ph.D. from Princeton Theological Seminary where he studied under Bruce Metzger. Much of Ehrman’s career has been dedicated to proving a rather unorthodox thesis: that history has been incorrect in suggesting that it was heretics such as Marcion who were responsible for tampering with the texts of the Bible. Rather, he suggests and attempts to prove, it was those who professed faith in Christ who sought to change the Scripture to force it to adapt to their beliefs. In the past decade he was written extensively, though the bulk of his work has been directed at the academy, as shown by such intimidating titles as The Orthodox Corruption of Scripture: The Effect of Early Christological Controversies on the Text of the New Testament. It is somewhat surprising, then, to see that at this very moment his name adorns the covers of no less than three books on the New York Times bestseller’s list.

The book that has sold the most copies, Misquoting Jesus: The Story Behind Who Changed the Bible and Why, is Ehrman’s recent attempt to popularize his thesis, for it is written at a popular level, attemping to engage a person with no prior knowledge of the history of the Bible. He seeks to show that a combination of scribal mistakes and deliberate tampering shaped the Bible we read today. This book is written, he says, “for people who know nothing about textual criticism but who might like to learn something about how scribes were changing scripture and about how we can recognize where they did so” (15).

The book begins on an unexpected note with an autobiographical section in which Ehrman traces his conversion to Christianity, his training at Moody Bible Institute and Wheaton College and his growing concerns with the doctrines of the infallibility and inerrancy of Scripture. During his studied he developed a particular interest in the manuscripts that preserve the New Testament for us and the reconstruction of the original text. The question he continually asked of himself was a fair one: “how does it help us to say that the Bible is inerrant word of God if in fact we don’t have the words that God inerrantly inspired, but only the words copied by the scribes–sometimes correctly but sometimes (many times!) incorrectly? What good is it to say that the autographs (i.e., the originals) were inspired? We don’t have the originals!” (7). A turning point came in a post-graduate study of Mark. Attempting to reconcile a passage that seems to display a contradiction, his professor provided a simple one-line critique: “Maybe Mark just made a mistake” (9). Having opened his mind to mistakes within Scripture, the floodgates opened and the seeds of his eventual thesis were planted. The Bible suddenly seemed to be a very human book.

Through the first two chapters, Ehrman attempts to undermine the reader’s confidence in Scripture because of the inability of the early scribes to accurately transmit the texts. He shows that Christians, as the Jews before them, were people of the book and that “books were completely central to the life of early Christians” (29). Yet, while Christianity was a highly literate religion, it was composed primarily of illiterate people. This leads to a discussion of the copyists who labored to duplicate and disseminate the Scriptures in the first fifteen hundred years of the church’s history. He presents the scribes as being people who were mostly honest, but very often made unintentional but still significant mistakes. He suggests also that many scribes were only too willing to make changes to their texts in order to make the reading more clear or to make it conform to their understanding. Ehrman even suggests that Christian scribes were more likely to do poor work than their secular counterparts because they were mere amateurs.

Having attempted to undermine the reader’s confidence in the transmission of Scripture because of the problems inherent with scribes, Ehrman continues his argument by casting doubt on the manuscripts themselves. The manuscripts that exist today are so filled with scribal errors that we cannot trust them to lead us back to the original text of scripture. He appeals to the great number of variances in the existing manuscripts (somewhere between 200,000 and 400,000) but without properly qualifying these numbers. After all, we have such a vast array of manuscripts available to us that we have to expect there will be a great number of variances. Additionally, the great majority of these variances are simple and easy to reconstruct: changed word order, misspellings and the like. By the time this class of error has been accounted for, there are not nearly as many difficulties as he would have the reader believe.

After discussing some of the notable scholars in the area of textual criticism, Ehrman continues his argument to show that “in my judgment the translations available to most English readers are based on the wrong text, and having the wrong text makes a real difference for the interpretation of these books” (128). He presents several passages that he feels have been corrupted from the time they were first written, showing that we cannot inherently trust the Bible we have in our hands today.

The sixth chapter is pivotal and does much to advance Ehrman’s thesis. In this chapter he suggests that “sometimes the texts of the New Testament were modified for theological reasons” (151). His argument moves in an almost-ridiculous direction as he seems to believe that anytime a passage was used by the Church Fathers in order to counter the false theology of a heretic, it necessarily indicates that they tampered with that text to first make it say what they felt it needed to say in order to prove their version of orthodoxy. It is an absurd and frustrating conclusion that lacks any convincing proof.

The book then moves to its inevitable conclusion when Ehrman attempts to show that much of Christian theology is built not upon the original scriptures, but upon later scribal additions or deliberate subtractions. He singles out three issues: the role of women, the relationship of Christianity with Judaism, and the relationship between pagans and Christians. In each case he seeks to show that “a number of passages in our surviving manuscripts appear to embody the apologetic concerns of the early Christians, especially as these relate to the founder of their faith, Jesus himself…all of these controversies came to affect the texts that were eventually to become part of the book that we now call the New Testament, as this book–or rather this set of books–was copied by nonprofessional scribes in the second and third centuries, and occasionally came to be altered in light of the contexts of their day” (205).

Like the book’s introduction, the conclusion is more personal and autobiographical than the body of the text. Ehrman explains his belief that the Bible is merely an uninspired, error-filled human book. “Given the circumstance that he [God] didn’t preserve the words, the conclusion seemed inescapable to me that he hadn’t gone to the trouble of inspiring them” (211). Inevitably, then, the authors were only men who were much like the scribes he presents throughout the book. They were Christians who had inherited traditions about Jesus and his teaching and who had come to believe certain truths about God and Jesus. They passed along these traditions in their writings. If each of these authors was different, it is “not appropriate to think that any one of them meant the same thing as some other author meant” (212). Thus we have no need to compare the words of one author to another and to attempt to reconcile and harmonize them. The four gospels do not present four emphases about Jesus’ life, but tell four different stories, each changed to fit the beliefs and presuppositions of the author. The great irony of this discussion, as Ehrman points out, is that “the scribes were changing scripture much less radically than the authors of the New Testament themselves were” (215).

Ehrman leaves the reader with a Bible that is only a human book, written by and for humans without the intervention of God. There is no inspiration and certainly no inerrancy. It is an important historical text, but little more than that. This hardly a radical conclusion for our day, of course, and it is one that many readers are only too eager to believe. But it is a conclusion that is at odds with Scripture itself and which makes Christianity a religion based upon a lie. It leaves Christians as people of a book that does not deserve our attention or affection.

Before I conclude, I would like to point out a couple of annoyances with the book that should be of concern to any reader, whether or not he agrees with the author’s thesis. First, much of the author’s thesis is based upon statements such as “we have reason to think” or “scholars believe” or “studies have shown.” These statements may move his argument along quickly and logically, but they are hardly convicting or satisfying. There are very few citations for a book of this depth and potential magnitude. This may be necessary simply because of the intended audience who may be intimidated by a dense bibliography and by many pages of endnotes, but it becomes difficult to truly believe in Ehrman’s thesis when he seems so unwilling to offer convincing proof. Finally, the book is filled with statements presented as fact that are, in reality, hotly disputed. Ehrman believes, for example, in the existence of the document known as “Q” and that Luke and Matthew both copied liberally from the book of Mark. He believes that the book of 1 Timothy was not written by Paul and that several important passages throughout the gospels and epistles were not original but appended to the documents at a later date by people with a specific agenda. If the reader does not agree with these presuppositions, much of the book’s argument disolves.

Needless to say, I found the book disappointing and unconvincing. Throughout the book, I was continually struck by one nagging thought. If we cannot know with any certitude what parts of the Bible are original, how can we know which parts were changed? If we have no confidence in the original text, how can we have confidence that a particular passage has been tampered with? Ehrman’s thesis seems to hinge on the belief that we can know which passages were changed, even while we have no confidence in the original text. This is, quite simply, untenable. His thesis also casts doubt on all of ancient history, for surely the problems with transmission of documents is not unique to Christianity (even if, as he suggests, it is particularly pronounced among those who used amateur scribes).

Ehrman is a skilled writer and creates an argument that has already proven convincing to many people. However, should those who read it choose to dig deeper and to find knowledgeable scholars who reject his thesis, they will soon realize that there is much more to the story than this author is presenting.