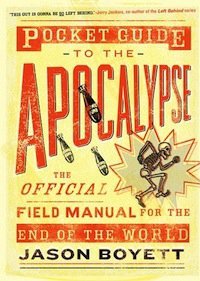 A few weeks ago Jason Boyett wrote me to ask if he could send along a copy of his latest book, A Pocket Guide to the Apocalypse. I rarely turn down a book, so told him I would be glad to read and review this one. He encouraged me to review it honestly and to pan it if I felt that was necessary. He must believe in the old adage that “no press is bad press.”

The Pocket Guide, which is written in a style reminiscent of Douglas Adams’ famous five-part trilogy The Hitchhiker’s Guide to the Galaxy, is a “comprehensive guide to the last days, a must-have for apocalypse watchers, readers of Revelation and all-around Armageddon obsessives” (from the back cover). To translate, it is a book that pokes fun at those who think they have the end-times all figured out and who like to claim they know when the end is coming. It also seeks to bring just a little bit of clarity to the concepts and terminology surrounding the end-times.

Inside you’ll find all kinds of interesting information. The book kicks off with an apocalyptionary (let me assure you that Microsoft Word does not have that book in its dictionary) which defines many of the terms one needs to know to undertake a study of eschatology. It includes words like eschatology. To understand the author’s writing style, which is clearly meant to appeal to a younger audience, here is an excerpt from his definition of Antichrist. “The Antichrist is akin to a devious evil twin of Jesus, in that his hidden agenda is not just the world domination thing but also to oppose Christianity by torturing and destroying all those who refuse to lick his proverbial boots. But not for long, as Jesus also has an agenda – to expose the Antichrist as a fraud, go medieval on his pointy satanic tail during the battle of Armageddon, and reign for a thousand years in his stead. According to dispensationalist theology, the Antichrist is scheduled to appear halfway through the Tribulation. There will be a parade.” Later in the book is a chapter that lists and evaluates many of the favored choices of Antichrist among end-times prognosticators such as Nero, the pope, Hitler, Bill Gates, and so on.

The heart of the book is two chapters that detail the hundreds of times a person has declared that “the end is near.” These doomsdayers, ranging from Romulus (founder of Rome) to Martin Luther to Pat Robertson and beyond, have often gathered immense following, but so far their success rate is approximately zero percent. The book wraps up with a discussion of the various eschatological beliefs (where amillennialism seems to fare quite well) and then with a grab-bag of topics that did not rate a chapter of their own. A highlight in this final section is an interview with end-times expert Paul Meier.

There were a few times in reading this book where I would laugh out loud, and then catch myself and question if the ends times are really a topic we should make light of. There were other times where I wondered if Boyett had crossed the line between humor and blasphemy. At best I would say there are a few places where he may be towing the line. Another concern (though one unrelated to theology) is that he teaches that the early church leaders were nearly unanimous in their belief in premillenniallism. That is a common belief, but one that is inaccurate as recent studies show that there was a variety of beliefs in the ancient church. And finally, Boyett uses the “millions and billions of years ago” language that does not sit so well with those of us who believe in a young earth. Beyond those concerns I found this book tremendously enjoyable and I can’t deny that I learned quite a bit through reading it.

The Pocket Guide is the anti-Left Behind. Boyett writes with humor and insight, and accomplishes what must have been one of his main goals – to show that we just cannot know exactly how or when this world is going to end. Some things are hidden from us, and we need to believe that God has good reason in this. This book will help convince you that we sometimes need to leave well enough alone.