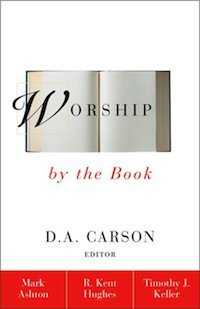 Too often, when Christians discuss worship, they go little further than arguments about styles of music. The “worship wars” that have plagued the modern church are a prime example of this. Many churches have fallen apart and many Christians have been deeply hurt over styles of music. Churches that have sought to be progressive and contemporary have often done away with hymns, throwing away hundreds of years of Christian tradition in the process. Other churches have refused to sing any song written in modern times, indicating an irrational bias towards days gone by. In the process worship has come to be nearly synonymous with music. Church services are often structured around a time of worship, led by a worship pastor, and this is followed by a time of apparently non-worshipful teaching led by a teaching pastor.

These worship wars are a terrible distraction, for as believers who have access to the New Testament we know that worship extends far beyond music. Worship is to encompass all of life rather than only select parts. Worship by the Book is an attempt by four men, D.A Carson, Mark Ashton, Kent Hughes and Timothy Keller, to unravel the meaning of worship as well as to suggest ways that corporate worship, done as the church gathers together, can be most meaningful and most faithful to Scripture.

The book begins with an essay by Carson entitled “Worship Under the Word” in which he builds a framework around which each of the other authors will write. The heart of the essay is a lengthy definition of worship and a twelve-point examination of this definition. Carson’s definition is as follows:

Worship is the proper response of all moral, sentient beings to God, ascribing all honor and worth to their Creator-God precisely because he is worthy, delightfully so. This side of the Fall, human worship of God properly responds to the redemptive provisions that God has graciously made. While all true worship is God-centered, Christian worship is no less Christ-centered. Empowered by the Spirit and in line with the stipulations of the new covenant, it manifests itself in all our living, finding its impulse in the gospel, which restores our relationship with our Redeemer-God and therefore also with our fellow image-bearers, our co-worshippers. Such worship therefore manifests itself both in adoration and action, both in the individual believer and in corporate worship, which is worship offered up in the context of the body of believers, who strive to align all the forms of the devout ascription of all worth to God with the panoply of new covenant mandates and examples that bring to fulfillment the glories of antecedent revelation and anticipate the consummation.

This is an unusually long and detailed definition of worship, yet one that for precisely those reasons is exceedingly useful.

Following Carson’s introduction, each of the three co-authors is given one chapter to provide insight about worship within their tradition. The first of these is Mark Ashton, who is vicar of the Round Church at St. Andrew the Great in Cambridge, England. His essay is entitled “Following in Cramner’s Footsteps” and he proposes that the Anglican Church recover the principles Cramner used to draft the Book of Common Prayer. He suggests each aspect of a worship service needs to meet three criteria: is it biblical, is it accessible and is it balanced? Despite coming from a tradition that seems far removed from mainline evangelicalism, I suspect the bulk of believers with agree with most of what he writes, at least until the final paragraphs where he writes about infant baptism and presumptive regeneration. I was a little bit concerned about a vague, underlying spirit of pragmatism that seemed to lie under the surface of some of what he wrote. Within the sample services, for example, is an outline of a guest service in which they have dumbed-down their Bible translation, opting for the Good News Bible in place of the New International Version. Despite this, there was much within his essay that was of practical value.

The second essay was written by Kent Hughes, pastor of the College Church in Wheaton, Illinois. At the heart of Hughes’ essay, “Free Church Worship,” were his six distinctives of Christian worship: it is God-centered, Christ-centered, Word-centered, consecration, whole-hearted and reverent. I especially appreciated his emphasis on reverence, as this is sorely-lacking in many contemporary churches. He closed with some useful thoughts on music in corporate worship.

The final essay was written by Timothy Keller, pastor of Redeemer Presbyterian Church (PCA) in New York City. Keller is seen as a trend-setter within the Presbyterian Church of America, so I looked forward to his essay which was entitled “Reformed Worship in the Global City.” Keller contrasted and compared contemporary worship and historical worship and proposed a middle-ground, but not one as simple as an even distribution of elements from each. His essay was built around an examination and defense of the Reformed worship tradition. He examined its variety, sources, balance, core, traits and tests. I particularly enjoyed his explanation of the service structure at their church and the cycles of praise, renewal and commitment.

While it was generally a strong essay, it seemed to come apart a little at the end. The author wrote about the importance of including unbelieving musicians in the worship team as a way to evangelize them, arguing that God’s common grace given to musicians brings as much glory to Him as do believers using their talents in His service. I much preferred Kent Hughes’ take on this same issue. In the previous chapter he wrote “Musicians must see themselves as fellow laborers in the Word and must lead with understanding and an engaged heart. Those who minister in worship services must be healthy Christians who have confessed their sins and by God’s grace are living their lives consistently with the music they lead. The sobering fact is that over time the congregation tends to become like those who lead.” I was also a bit disappointed by the content of the bulletin inserts of Redeemer Church that were included within this essay as they seemed to favorably quote Mother Teresa, writing that the most important need of the poor is to be wanted.

Despite a few small missteps, I found this book fascinating and convicting. I would encourage any pastor or worship leader to buy this book and to read it through at least a couple of times. It will provide valuable insight into planning worship services that will lead believers into a time of worship that goes far beyond the music. Worship like these men describe is becoming increasingly rare. I hope this volume can help many churches recover worship that is done by the Book.