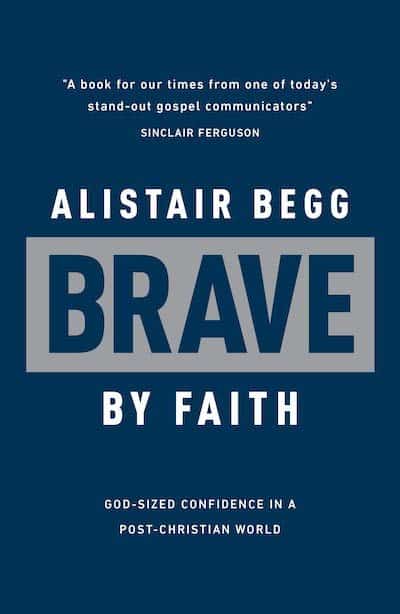 There is no doubt that the times are changing, no doubt that Western society is undergoing a great transformation in which those who hold to the Christian faith, or those who even respect it, are becoming a bare minority. Countries like the UK, Australia, and Canada are already quite far along in this process and, while the US has been insulated for a little bit longer, it is now clearly heading in the same direction. Secularism and modern forms of paganism are quickly rising as the expected and respected alternatives to Christianity. And while Christians are notorious for predicting that persecution is just around the corner, it is not irrational to foresee increasing challenges and increasing difficulties coming to those who faithfully live and worship as Christians.

Alistair Begg’s new book, Brave by Faith: God-Sized Confidence in a Post-Christian World, is a call for Christians to live with courage and boldness in this new culture. “In reality, for us in the English-speaking West,” he says, “this world has tended to feel very much like home, and our treasures have been right before our eyes. But now we are finally facing the fact that this broken, sinful world in which we live is not actually our home—that what the Bible says concerning believers in this world is really true: that we really are aliens and that we really are strangers.” And while this has always been the case, it has been obscured by the size of the church, the power of the church, and the legal protections afforded to it.

But today’s secularism is pushing back hard and beginning to erode many of those “advantages.” Even in the West, built upon the values of classical liberalism with its freedom of conscience and freedom of religion, it may soon be impossible to maintain the respect of society while also maintaining a Christian conscience. In that context, what are Christians to do?

Begg suggests we turn to the book of Daniel to learn how to live in a society that is directly opposed to us. This book tells about Daniel and a group of his fellow Jews who lived in exile in Babylon. It tells how they were able to live as functioning and often respected members of that society, while still keeping themselves separate from its pagan values. It tells how they were willing to face the consequences when society demanded from them what God had forbidden. It tells how God cared for them and protected them, keeping them from slipping into error, compromise, or denial. Of course the hero and main character of the book is not Daniel or his friends, but God. “The overarching message is simply this: God is powerful, and God is sovereign, and even in the face of circumstances that appear to be prevailing against his people, we may trust him entirely. The battle may seem to be tilting against the church, but God still reigns supreme.”

In 7 relatively brief chapters, Begg provides an exposition of the first 7 chapters of Daniel, applying the text specifically to the challenges of living in the modern West. In the first chapter he encourages Christians to know their lines, to consider where society will demand we compromise and to know where we stand on those issues. In the second chapter he encourages them to keep their confidence, to remember that God is sovereign and that history unfolds only under his control. As he continues, he calls Christians to obey God despite difficult and unjust consequences, to speak out with the good news of the gospel, to see through the glitter of society’s idolatries, and to serve well and stand firm in lives that seem very ordinary. He concludes with a reminder that God has promised he will win in the end and that, truly, Christ has already conquered.

Though Brave by Faith is only a short book, it packs a punch. It calls Christians to live in a distinctly Christian way in a distinctly unChristian culture. It gives us the wisdom we need and the confidence we may lack to face the challenge of a society that is turning not only away from us, but is even turning against us. For, as we learn, others have faced this challenge in the past and honored God through it.