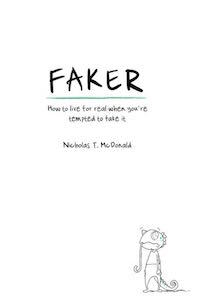 I try to vary my reading enough to include books that are targeted at different demographics from me. I generally enjoy reading them, but try as I might, I can’t really evaluate them as well as I would like. After all, I inevitably bring my perspective. Whether it’s reading a book for women, a book for teens, or a book intended for people from a completely different background, I can’t help but approach it as a middle-aged, Christian, Caucasian, Canadian (and any number of other adjectives) male. Yet I persevere and almost invariably benefit from the reading.

Well, recently I read Faker by Nicholas McDonald. This is a book targeted squarely at teens and young adults. And though it was quite a long time ago that I fit those qualifications, I do have at least some memories of them. And I think Faker would have been a great book for me to read, probably when I was around sixteen or seventeen years old. Now that I have teens of my own, I think it would be a great book for them to read.

I grew up a church kid—one who was well-taught and well-trained. Though I grew up knowing the right things to do and say, I experienced all the usual struggles in actually doing and saying them. I learned pretty quickly how to fake it—how to give the right answers even while secretly doing the wrong thing. But it wasn’t only faking it in front of parents, pastors, and teachers. I learned as well that I needed to fake it in front of my friends, to put on an acceptable persona, to bury my fears and problems (and sometimes even my virtues).

That’s what this book is about: How to live for real when you’re tempted to fake it. Faking it has always been a concern, but today’s teens may have even greater opportunity and temptation, interacting as they constantly do through the plethora of social media channels. Speaking to them, Nick says:

I’ve felt alone. I’ve felt like I was living with a mask. And I’ve seen others wearing masks, too.

I think most teens will immediately identify. And if they do, this book will meet them powerfully right where they’re at.

The heart of Faker is this narrow focus on the tendency to fake it, the spiritual diagnosis behind it, and the gospel-centric cure. Using poignant and humorous illustrations from his own life, while also drawing on a few pop culture references, he identifies with his readers and helps them own the tendency. Then, using the Bible, he tells them the truths that will confront, challenge, and hopefully transform them.

Short, punchy, dignified, well-written, and full of silly but interesting Wimpy-Kid-style illustrations, Faker is an excellent little book and one your teens (or perhaps even you) will benefit from.