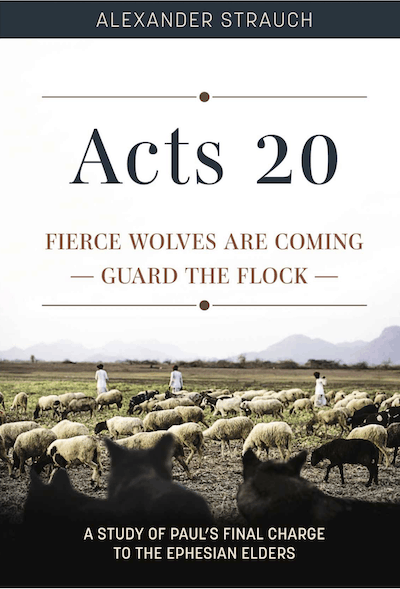 There are many passages in the Bible we could go to to learn of the calling, the preparation, and the character of the elder. But it has often struck me that one of the most obvious also seems to be one of the most overlooked—Paul’s farewell address to the Ephesian elders in the twentieth chapter of Acts. Paul could not spare the time to visit the city and the church there, so summoned the elders to him. Knowing that his time on earth was short, he gave them their final charge, their final marching orders. And this is what made up the content of his address. As it happens, this is also what makes up the content of Alexander Strauch’s new book Acts 20: Fierce Wolves are Coming; Guard the Flock.

Strauch has written a number of excellent books on elders and eldership, the foremost being Biblical Eldership which I’ve long recommended as a preeminent treatment of the topic. Some of his other titles such as Love or Die and A Christian Leader’s Guide to Leading with Love hone in on particular aspects of the task of the elder and the life of the church.

Acts 20 is an exposition of a key text on eldership and one that simply moves through it verse by verse while often pausing to provide application. And so Strauch focuses on serving the Lord with humility, on serving the Lord amidst tears and persecution, on complete dedication to Christ and the gospel, on declaring the whole counsel of God, on paying strict attention to oneself and to all God’s flock, and so on. He writes as an elder to other elders, and as a man with extensive experience who seeks to help those with less experience.

As made evident in the book’s subtitle, a particular area of focus is Paul’s knowledge that fierce wolves would soon be preying upon the flock—some approaching from outside the church and some even arising from within it. “Since the beginning of time, false teachers and prophets have tried to deceive God’s people from believing the truth of God’s Word. The Old Testament Scriptures warned about fake prophets, corrupt priests, idolatrous kings, and failed elders. We should never be surprised by false teachers, who are in reality agents of Satan.” We should not be, and neither should the church in Ephesus. “Every new generation has to face its own fierce wolves. That’s the way it has always been, and is, and always will be till the Lord comes. What Paul was doing here was preparing the elders for future attacks by cunning predators who intend to devour God’s flock and distort the truths of the gospel.”

As he wraps up his book, Strauch says “Paul’s instructions are pleas to the Ephesian elders are just as urgently needed today as they were that day on the shores of Miletus.” And indeed, they are. For that reason I am sure that any pastor/elder who reads this book will be blessed, challenged, and equipped by it. I trust they will benefit from this exposition of that passage’s many treasures.