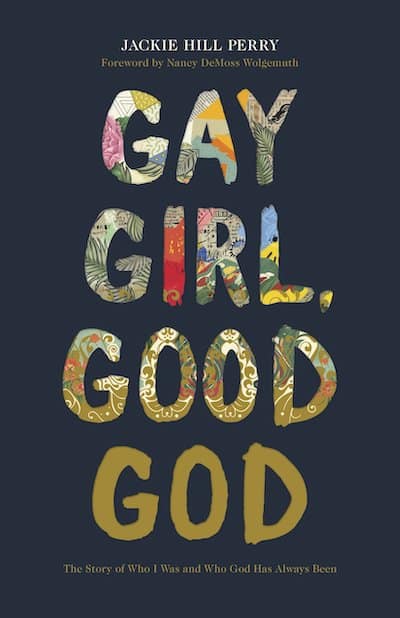 I admire any Christian author who is willing to take on the subjects of homosexuality or same-sex attraction, and especially those who choose to take a “traditional” rather than “progressive” view of it. The subject is so raw and so controversial that any serious discussion is likely to generate barrages of fire from within the church and without. This makes me particularly thankful for Jackie Hill Perry and her new book Gay Girl, Good God. You may know Perry from her albums, her spoken word performances, or her conference talks. Now you can get to know her in a whole new way—through this account of her life.

Her book is divided into three parts—the first tells who she was and the second who she became, while the third takes a close look at the issue of same-sex attraction. The first two, then, are primarily biographical while the remaining one is didactic. The first two tell how she awoke to her same-sex attraction and began to pursue it, while the remaining one describes the scriptural truths that made all the difference.

So who was Jackie Hill Perry? She was a sinner. She was a sinner like you and me who experienced particular traumas—fatherlessness and childhood sexual abuse—and who experienced a particular temptation to sin—same-sex attraction. Looking back, she knew it from a young age, but it wasn’t until her late teens that she came to grips with it and began to practice it. She became involved in lesbian relationships, taking on the part of the dominant, more masculine partner. She made this a core part of her self-identity, so that without it she wouldn’t even know who she was.

She knew God was calling her, but not in the way she had expected. “God was not calling me to be straight; He was calling me to Himself. The choice to lay aside sin and take hold of holiness was not synonymous with heterosexuality.” It’s not that God would allow her to remain a “gay Christian,” but that there was far more to God’s will for her than a mere change of sexual orientation. “In my becoming Holy as He is, I would not be miraculously made into a woman that didn’t like women; I’d be made into a woman that loved God more than anything. If marriage ever came or singleness called me by name, He wanted to guarantee by the work of His hands that both would be lived unto Him.”

She became a believer and made the gruelling decision to part with her girlfriend and, really, to part with her whole life as she had known it. She came to God through the gospel of Jesus Christ and soon learned she would need to live by that same gospel. Her same-sex attraction was not immediately zapped away, but slowly, steadily put to death as she came alive to righteousness. “When salvation has taken place in the life of someone under the sovereign hand of God, they are set free from the penalty of sin and its power. In a body without the Spirit, sin is an unshakable king under whose dominion no man can flee. The entire body, with its members, affections, and mind all willfully submit themselves to sin’s rule. But when the Spirit of God takes back the body that He created for Himself, He sets it free from the pathetic master that once held it captive and releases it into the marvellous light of its Saviour. It is then able to not only want God, but it is actually able to obey God. And isn’t that what freedom is supposed to be? The ability to not do as I please, but the power to do what is pleasing.” Perhaps the most fascinating part of the book is her account of coming to grips with womanhood and embracing her femininity after this amazing life transformation.

In the book’s final section she takes on some of the hard questions related to homosexuality and same-sex attracted Christians. She first makes it clear: “I am not implying that because these men and women are still tempted with SSA, that they bear the identity of what some would call a ‘Gay Christian.’” She takes on matters of identity, matters of endurance, and what she calls “the heterosexual gospel.”

Put it altogether, and this is a powerful book. Perry is a sound theologian who uses the Bible faithfully. She is also a skilled wordsmith with a rare ability to articulate herself well. At a time when there’s too much bland writing, she brings a fresh voice. I don’t want this to get missed—this book is a joy to read simply because of how good a writer she is. She tells her story, but her story is not the main point. She wants to point far beyond herself, and she succeeds admirably. “This book is a lifted hand, a glad praise, a necessary hymn, a hallelujah overheard and not kept quiet. This work is my worship unto God that, with prayer, I hope will leave you saying, ‘God is so good!’” It will, because even though it’s about her, it’s actually about Him.