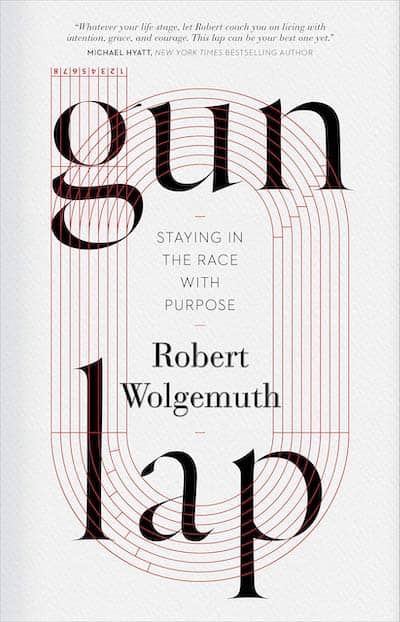 Would it be strange to say that my favorite part of Robert Wolgemuth’s Gun Lap is the dedication? I think you’ll understand if you allow me to explain. Several months ago Robert sent me a note to say he was writing a book about a man’s “gun lap,” the final lap of a man’s race through life. It is a book meant to guide those already running their final lap and to equip those who are approaching it. Having just watched the memorial service for my son, Nick, and having heard me speak of how Nick ran his short race well, Robert wondered if he could dedicate the book to him. And of course we were honored that he would do so. So now there is a book for older men that is dedicated to a younger man—a book calling older men to sprint strong to the finish line, just as my boy did. It’s a blessing.

But though my favorite part of the book may be the dedication, that’s certainly not all I enjoyed about it. I’ve often said that from the days of my young adulthood I’ve anticipated the days when I’ll be much older. Having witnessed a number of negative examples of older men, I’ve been eager to prepare myself now for who and what I will be then. Robert Wolgemuth is just the kind of man I’d trust to guide me. And that is exactly what his book is about.

In the introduction he explains “I’m writing Gun Lap for myself and for men like me. … Men who find themselves at the point in their lives when they’re running their last lap. Or I’m writing it for men who are getting ready to start their final lap, and they have some questions, maybe even some anxiety about it. This is no small thing—examining our very own lives at this point on our journey. Taking our last lap. In fact, it’s a big deal.” It is, indeed, and it merits some serious consideration and preparation.

In the early chapters, he encourages men to take seriously their responsibility to consider that final lap and to seriously prepare themselves for it by prioritizing their relationship with the Lord. He uses himself as an example of a man who was late to very consistent and substantial devotional habits, but who has been immeasurably blessed by them. He describes some of the key men in his life, calls his readers to think about their own, then to determine which of those people’s qualities they specially want to imitate or specifically not imitate.

As the book continues, he begins to offer very practical counsel, such as keeping up with technology in order to be able to relate to the younger generations. He focuses on the importance of continually speaking God’s own truth to ourselves and of celebrating God’s good gift of a wife in the twilight years. He looks at the importance of physical fitness and qualities of character and encourages men to use their time well when they suddenly have more of it than they’ve had in many decades. He tells men to press on with mentoring the young and evangelizing the lost, to continue to make themselves useful to God’s mission and purpose.

All-in-all, Gun Lap is exactly the book I hoped it would be. It features a man who is running his final lap engaging in conversation with the people beside him and the people not too far behind him. He is passing along the lessons the Lord has taught him and in that way equipping other men to run their race well, all the way to the finish line. It’s a book that has already benefitted me and a book I am sure will benefit many other men like me, and for that reason, I heartily recommend it. And, as you read it, don’t skip the dedication. While it may not be the most important part of the book, it’s still a very good part—a part that brings a smile to my face and a tear to my eye.