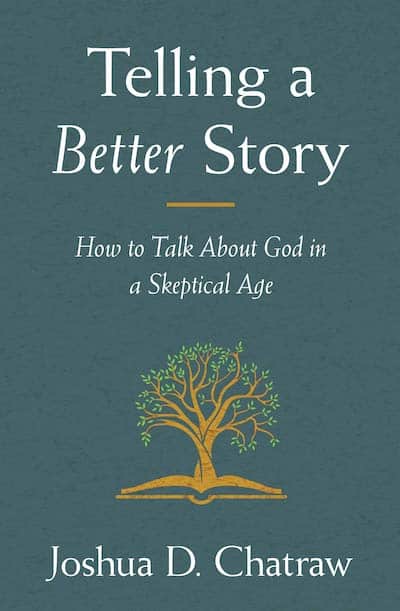 The gospel of Jesus Christ is fixed, unchanging, and unchangeable. Just as God is the same yesterday, today, and forever, so, too, is the good news of what Jesus Christ has done. But the methods and strategies Christians use to explain and defend that gospel can vary as much as humanity does. While there have always been many who are skeptical about Christianity’s truth claims, contemporary Western unbelievers represent a new type of skepticism. For this reason Christians do well to examine and reexamine the ways we explain the faith and the ways we attempt to persuade others to explore and embrace it.

One compelling response to twenty-first century Western skepticism comes in a new book by Joshua Chatraw. Telling a Better Story: How To Talk About God in a Skeptical Age explains why the methods of the apologist need to be different now than they were 20 or even 10 years ago. “At one time in the West, Christianity seemed plausible because elements of the Christian story were woven into the fabric of everyday life. Leading institutions, daily practices, and common communication assumed realities such as a heavenly realm, a transcendent moral code, sin, divine judgement, and the possibility of ultimate redemption. These formed the tacit background of much of the culture’s everyday stories, the tapestry of meaning by which people lived.” Though not everyone was a Christian, they at least lived in a setting that made the Christian story make sense. “At the very least, the belief in God—and more specifically the God of the Bible—seemed a viable option for most and was generally viewed as a positive influence on society.”

But that was then and this is now. Many have rightly pointed out that we are swiftly entering into a post-Christian context in which society is working from a new set of assumptions. Far fewer people believe in the God of the Bible or any god at all; the leading institutions, daily practices, and common communications of our society no longer form that tacit Christian background; many of the elements of the Christian story have been deliberately unwoven from the fabric of everyday life. There is an important implication: “Living in this increasingly post-Christian context means believers should no longer expect the ministry strategies of a bygone friendlier context to be as effective.” The need to explain, defend, and share the faith is as great as ever, but some of the ways we do this may need to change with the times. And that is where Chatraw steps in.

Telling a Better Story is all about, well, telling a better story. Chatraw builds upon the assumption that all human beings are living out some kind of a story, some narrative about the big questions: Who are we? What’s the meaning of life? What’s wrong with the world and how can we fix it? What’s wrong with me and how can I fix myself? The task of the Christian is to listen for the story others are telling, and then to show how the Christian faith offers one that is more compelling. “This book,” he says, “is about engaging the deepest aspirations of our secular friends and asking them to consider how the story of the gospel, as strange as it may seem to them at first, just may lead them to what their heart has been looking for all along.”

The book is divided into three parts. In the first part he provides some background, showing what has changed in recent decades and why it matters to Christians as they share their faith with others. Part two is the heart of the book and offers some “trajectories” to follow when engaging with others. Here he introduces a framework he calls “inside out” which allows the apologist to show others the rival stories they are following while attempting to show them a better one. It is a means of addressing cultural assumptions such as “I don’t need God or religion,” or “you have to be true to yourself,” or “we have progressed beyond faith and myths to science and reason.” Part three answers several common charges: The Christian story is oppressive, it is unloving, and it is false. Written for a general audience, the book moves quickly and makes for reading that is at once relatively simple and seriously thought-provoking.

A few years ago I had the opportunity to speak to a public school class about the Christian faith. It struck me as I was speaking that not one of the students in that class, beyond my son, had ever read a Bible or heard a sermon or ever seriously considered that Jesus Christ might just have been a historical figure (not to mention the Savior of the world). I realized that day that some of the apologetic and evangelistic methods I had learned as a young believer needed to change. What I had assumed then, I could not assume now. In my assessment Telling a Better Story is an effective work that teaches what is perhaps more of a framework than a method for addressing contemporary skeptics. But it is just the kind of framework that might help the gospel make sense to those who have grown up in this post-Christian culture. I’m glad I read it and am glad to recommend it to you as well.