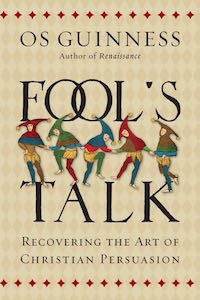 We are all apologists now, and we stand at the dawn of the grand age of human apologetics, or so some are saying because our wired world and our global era are a time when expressing, presenting, sharing, defending and selling ourselves have become a staple of everyday life for countless millions of people around the world, both Christians and others. The age of the Internet, it is said, is the age of the self and the selfie. The world is full of people full of themselves. In such an age, “I post, therefore I am.” To put the point more plainly, human interconnectedness in the global era has been raised to a truly global level, with unprecedented speed and on an unprecedented scale. Everyone is now everywhere, and everyone can communicate with everyone else from anywhere and at any time, instantly and cheaply.

Guinness considers our time and our context the greatest opportunity for Christians and Christianity since Jesus and his apostles walked the earth. But what are we doing about it? “Many of us have yet to rise to the challenge of a way of apologetics that is as profound as the good news we announce, as deep as the human heart, as subtle as the human mind, as powerful and flexible as the range of people and issues that we meet every day in our extraordinary world in which ‘everyone is now everywhere’.”

What we have lost, he believes, is the art of persuasion—the kind of persuasion we see modelled in Jesus, in Paul, and in the Old Testament prophets before them. Jesus is the best example of course. He had a remarkable ability to communicate to people disposed to reject him, and yet to do so in such a way that they had to see his point despite themselves. Thus, persuasion is “the art of speaking to people who, for whatever reason, are indifferent or resistant to what we have to say.” It is the difficult and intimidating work of speaking to people who do not agree with us and are simply not open to what we have to say. And yet the Great Commission calls us to speak to them and to give them the opportunity to respond to the gospel.

One of Guinness’ great concerns about life in a digital world—and this may be a remnant of modernism—is the focus on victory. We want to win arguments and don’t care a whole lot for patient, gentle persuasion. “Our urgent need today is to reunite evangelism and apologetics, to make sure that our best arguments are directed toward winning people and not just winning arguments, and to seek to do all this in a manner that is true to the gospel itself.” That rings true in a Facebook world, doesn’t it?

It must be said that this is not a book about technique. While I believe there is a time and place for such books (my favorite is Greg Koukl’s Tactics), Guinness goes so far as to say that “Technique is the devil’s bait for the Christian persuader today, and at point after point we must turn down its seductions point blank, just as Jesus refused the tempter in the desert.” This book, then, is not technique, but persuasion. Guinness means to persuade you of the value of persuasion. And, by my assessment, he succeeds admirably.

Of all the book’s many strengths, one of the foremost must be the author’s suspicion of technique. Again, it’s not that technique is necessarily wrong, but that it can become a crutch. It can become the lazy man’s apologetics and, in that way, be very ineffective. “The desire for a surefire, foolproof approach to sharing faith is understandable—if only because there are people whom we love so much that we wish them to come to faith decisively, people we love, for whom anything short of success will seem a heartbreaking failure. That is only natural. But as we shall see repeatedly, we live in a fallen world in which any thoughts are thinkable, any arguments are arguable and any doubts are dubitable.” When we admit technique, we admit expertise. And there is a subtle danger here: “One danger of our specialized times is that apologetics will become the art of apologists talking to other apologists about apologetics, but never doing it.”

A second strength is the focus on apologetics as a lover’s defense of his beloved. We, the ones who love God, rise to his defense. “Christian advocacy is a lover’s defense, a matter of speaking out and standing up when God is framed unjustly and attacked wrongly.” It is not that God needs us, of course, but that he chooses to use us. “We therefore speak only on behalf of God, we speak under God, and we have no authority or power apart from God. The prophet’s formula is always ‘Thus says the LORD,’ and the worst indictment against the false prophets was for their presumption in claiming to speak for God when their words were entirely their own. In short, the major work in the defense of the faith is about God and by God. It is not about us, and it is not up to us.”

A fair assessment of the book will evaluate its weaknesses. But I see few beyond, perhaps, Guinness’ ecumenism. He is considerably more inclined to ecumenism than I am, and tends to draw from a wider stream of Christianity. Still, what he says is helpful and, in many cases, brilliant.

Eminently quotable and packed full of helpful insights, Fool’s Talk is a thoroughly enjoyable and remarkably helpful book. It is well-written, well-structured, and well-argued. I enthusiastically recommend it.