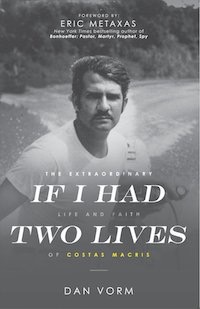 I feel like I should have been familiar with the name Costas Macris, but confess it was unknown to me until a biography unexpectedly showed up in the mail. Written by Dan Vorm, If I Had Two Lives is a stirring tale of an amazing life. I don’t know how it got to me, but I’m glad it did.

Born in Greece, Macris was raised in a Christian home, heard the gospel, believed it, and was saved. This made him among the one tenth of the one percent of Greeks who are evangelical. A man of unusual zeal, he became convinced at a young age that God had called him to missions. After attending Bible college and marrying, he took his family to the remote jungles of Irian Jaya.

His time in Irian Jaya was marked by the significant struggles and small but very real triumphs familiar to most missionaries. He was at first responsible for “station-sitting” for missionaries on furlough (including Don Richardson of Peace Child fame), then began to establish new outposts of his own. In every place he poured his heart and soul into the work and saw many precious souls come to faith. By the time jungle living broke his health and forced him to return to Greece, he left behind an organization comprised of a thriving central compound, thirty-seven school teachers, twenty-two evangelists, twenty airstrips, a three-plane local airline to serve missionaries, annual conferences, a children’s hostel, and, of much greater importance, established churches and baptized believers.

He survived the terrible illness that had forced his return, then got to work on his second great mission—reaching his own countrymen with the gospel. His nation of millions had merely thousands of believers, so he had his work cut out for him. He poured himself into this work tirelessly and, once again, experienced both triumphs and sorrows. Yet once again he saw the gospel drawing people to salvation. He died in 2006, leaving behind another thriving ministry.

His biographer aptly summarizes his life in this way:

If all of Costas’s many activities were to be boiled down, all his visions dissected, all his programs, efforts, and energies ultimately explained, this would be the distillation of his heart and actions: that men and women might come to faith in Christ for the forgiveness of their sins, and thus live for and enjoy God forever. For Costas, life had no greater purpose.

There is no greater legacy to leave. For that reason alone, consider reading If I Had Two Lives. You’ll be blessed if you do.