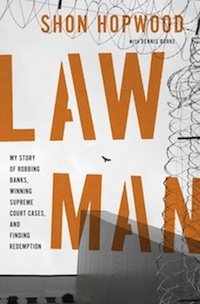 Buy from Amazon
Shon Hopwood robbed five banks before he was apprehended and sentenced to spend twelve years behind bars. Just twenty-three years of age, he was suddenly looking at living out some of his prime years in a federal penitentiary. Yet he somehow managed to find his place, not in sports or in gangs, but in the law library. There he found that he had a deep interest in the law and a knack for understanding it. Before too long he had become the resident jailhouse lawyer. In and of itself, this is not too unusual–every prison has its inmates who have an interest in law. But Hopwood stands out as the only one who wrote a petition that was accepted by the Supreme Court.

That is a notable accomplishment. There was another inmate in the prison whom Hopwood came to see had been trained unfairly in his arrest and conviction. The only hope was to appeal to the Supreme Court, something hundreds of people do each year. To make an appeal requires following a very rigid and specialized process that can confound even a season lawyer. Even then, only the smallest fraction of those cases make it past even the preliminary process of evaluation and acceptance. But Hopwood’s appeal was noticed and was just and was brought before the court. Even from behind bars he was able to be involved in the case, giving him an opportunity to become friends with some of the country’s top litigators.

The notoriety Hopwood gained has given him the opportunity to write Law Man, a memoir that releases today. This is the story of “robbing banks, winning supreme court cases, and finding redemption” (according to the subtitle). What you won’t find unless you read to the end is that the word “redemption” points well beyond the court room. All through Hopwood’s time in prison, friends and family were praying for him and sending him good books. Not only that, but there were Christians around him in the penitentiary. Shortly after his release, he got to the very end of himself and became a believer. He is now a student at University of Washington School of Law and attends Mars Hill Church U-District in Seattle, where Justin Holcomb serves as pastor.

Law Man tells a story of redemption–a good story of the deepest kind of redemption. It is notable that this book has been released to the general market. This is not a “Christian book,” which is to say that it comes from a mainstream rather than a Christian publisher. Yet no one can read the book without seeing that Hopwood’s story was leading him to the Lord. Well-written, inspiring and thoroughly enjoyable, this book stands out above so many of the prison memoirs out there.