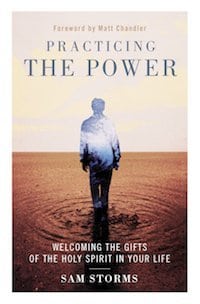 Matt Chandler says he has been waiting for this book for fifteen years. Mike Bickle assures the potential reader it “combines sound theology with inspiring personal examples.” Jack Deere describes it as “an immensely practical” work while Gregg Allison believes it is just what his church needs to experience a deeper outpouring of God’s grace. The book is Sam Storms’s Practicing the Power: Welcoming the Gifts of the Holy Spirit In Your Life.

Over the past couple of decades, the church has witnessed a great resurgence of Reformed theology. While many of these believers and their local churches hold to a cessationist view (that the miraculous gifts of the Holy Spirit have ceased) there is a growing minority who hold to a continuationist or charismatic view (that the miraculous gifts of the Holy Spirit are still available and operative). Yet even while the ranks of the continuationists swell, few churches have adapted their worship accordingly. There are only a small number of Reformed churches structured in such a way that they pursue and exercise these miraculous gifts. Sam Storms means to remedy that.

Practicing the Power is an implementation guide of sorts, a handbook for integrating the practice of those gifts into the life of the local church. “I’ve written this book for those of you who, like me, are of the mind that the power of the miraculous charismata is still available for those who believe, pray for, and humbly pursue it. And it is my hope that this handbook on how to implement spiritual gifts in a local church will prove to be helpful and useful.” He has written it especially for people who are convinced that the miraculous gifts continue in the church today but don’t have a clear idea of what to do next. “You’re a bit hesitant, maybe even frightened, by what might happen if you were to move forward and pursue and practice the full range of spiritual gifts that we read about in 1 Corinthians 12-14.” For those who are convinced of charismatic theology, Practicing the Power is meant to demonstrate how a church can structure itself to deliberately practice all of the miraculous gifts.

I will provide an overview of the book and then highlight several strengths and weaknesses.

Practicing All the Gifts

Two chapters discuss prayer and fasting. Storms begins here because those who earnestly desire the gifts must pray for them, even with fasting. “It seems to me,” he says, “that Paul believed that the reception of a spiritual gift is dependent on one’s prayer for it. Ask and you shall receive. Don’t ask, and you shouldn’t expect to receive.” Not only are prayer and fasting necessary to receive the gifts, but also to properly practice them. These chapters serve as primers on two important Christian disciplines for charismatics and cessationists alike.

One chapter focuses on miraculous healing, and especially the relationship between healing and prayer. Storms teaches that different Christians are gifted with a spiritual gift of healing which is activated only through prayer. Contrary to what many teach, there is no one gift of healing that allows a single person to heal every disease. Rather, he teaches, individual Christians are gifted to heal different ailments in particular circumstances so that “some are able to pray more effectively for back problems while others see more success when praying for migraine headaches.” He lays out a step by step process for healing prayer that begins with an interview, advances to a diagnosis, and then to the laying on of hands, prayer, and declarations: “In the name of Jesus, be healed!”

Three chapters are dedicated to prophecy which he considers “the most important (and most challenging) spiritual gift to practice and employ in the local church today for the edification of all.” He defines prophecy as “the human report of a divine revelation.” He expends great effort to distinguish prophecy from the ordinary conviction of the Holy Spirit and the ordinary application of God’s Word to our hearts and lives. He reserves prophecy for the times “the Holy Spirit supernaturally discloses information, facts, or insights not otherwise available by natural avenues of knowledge.” God communicates in this way through “dreams, visions, impressions, internal audible voice, symbols, sympathetic pains, providential occurrences, etc.” Later, he adds trances to the list. His understanding of continued prophecy must admit the possibility of error, so he turns to the book of Acts to interpret two familiar passages in that light. Failed prophecies “do not disqualify people as prophetically gifted nor do they render prophecy unimportant for the church.” Finally, he lays out a practice of prophecy first for small groups and then for gatherings of the whole church.

One chapter speaks of deliverance from the power of demons. He says in his opening paragraphs, “I believe that believers can be demonized,” which is to say, “inhabited by a demon with varying degrees of influence or control.” After explaining why so many Christians avoid deliverance ministry, he discusses the Christian’s authority over demons and the importance of deploying that authority to restrict demonic activity, to restrain demonic effort, and to thwart demonic plans. Once more he lays out a step by step plan on confronting and casting out demons.

One chapter warns Christians, and especially cessationists, of the danger of quenching the Spirit. “We don’t want to be a part of the bucket brigade that stands ready to douse his activity with the water of legalism and fear and extra-biblical rules. Obviously, one of the ways we do this is with a flawed theology that claims his gifts have ceased and been withdrawn.” And again, “I don’t believe cessationists consciously intend to quench the Spirit, but yes, cessationism as a theology quenches the Spirit.”

Concluding chapters warn of the difference between ministry and manipulation and tell of the importance of worshiping in the Spirit. Here, Storms compares charismatic with traditional or cessationist worship to show the superiority of charismatic practice.

Before I highlight strengths and weaknesses, I wish to express my admiration for Sam Storms. I have read a number of his books on other subjects and benefited from them. I read his blog and enjoy it a lot. As far as I can see, he has shown himself to be a man of godly character and biblical convictions. Not surprisingly, then, Practicing the Power demonstrates a number of notable strengths.

Yet even while I affirm all of this, I believe Storms’s teaching on the miraculous gifts is in many ways deeply flawed.

Never did Storms prove to me that I would even want to practice these gifts or be part of a congregation that does. The Bible makes it clear that God heals when it is according to his will and it lays out a practice that expresses our desire to have him do so. The Bible makes it clear that believers cannot be indwelled by demons because they are indwelled by the Holy Spirit and he doesn’t share! I see no reason why I would want to spend time in small groups and worship services asking people to describe trances, dreams, and symbols so we can grapple at interpretations when in our laps we hold the plain, sufficient, inerrant, infallible, completed Word of God.

Despite such critiques, I am genuinely glad Storms wrote Practicing the Power. I am thankful that the publisher sent it to me (unsolicited) for review. I have long wondered what a church would look like if it full-out embraced and practiced the miraculous gifts. Now I know. I read this book carefully, taking copious notes. I believe it has given me a deeper and more accurate understanding of charismatic practice. Ironically perhaps, it has deepened my cessationist convictions and my confidence in cessationist practice. While acknowledging and appreciating the book’s strengths, I still found it concerning and unconvincing.