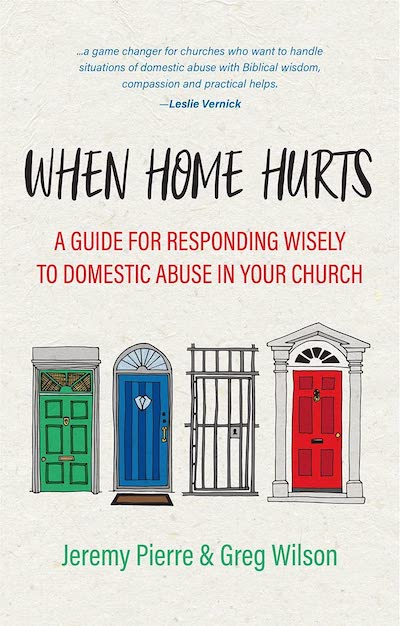 There is much that is expected of pastors and church leaders, much for which they have often been inadequately prepared. At various points most will find themselves having to respond to situations that involve domestic abuse. This could be a woman coming to them and pleading for protection from her husband, it could be an allegation coming from a third party who observed something alarming, it could be an abuser confessing sin and seeking reconciliation. Few people know how to respond well, respond confidently, respond helpfully.

It is for exactly this reason that Jeremy Pierre and Greg Wilson have written When Home Hurts: A Guide for Responding Wisely to Domestic Abuse in Your Church. “[We] wrote this book to help you be the kind of church leader, church member, friend, parent, sibling, or neighbor who responds wisely. We want the Church to be a new normal for those grown accustomed to abuse—a home that doesn’t hurt those inside, but instead welcomes them into the tender care of the Lord.” The book is, then, a guide for church leaders (or others) who wish to help people who are suffering under domestic abuse.

When Home Hurts is divided into three parts. In the first part, the authors explain how to understand abuse and do this by explaining the reader’s role as an agent of God’s love. Love, they say, “is the reverse of abuse because it builds others up at cost to self, rather than builds self up at cost to others. But love is not an equal opposite—it’s far more powerful because, unlike abuse, love is sourced from the eternal depths of God’s heart. You are an agent of a love much bigger than you.” They then explain the dynamics of domestic abuse and offer important considerations about terminology: “Terms like abuse, abuser, victim, and survivor each have a variety of meanings in domestic abuse literature. These terms can be helpful, but only as circumstantial identifiers, not core identities. Helpful uses of these terms are simply circumstantial descriptions of a person in relation to the abuse that occurred. Unhelpful uses are identifiers that define a person entirely by their relation to the abuse that occurred.” They describe abuse in this way: “Abuse occurs as a person in a position of greater influence uses his personal capacities to diminish the personal capacities of those under his influence in order to control them.” They then offer a framework to discern those abusive dynamics in real-world situations.

In the second part of the book they provide guidance on responding after an initial disclosure of domestic abuse. Over three chapters they tell how to care for the victim, how to confront the abuser, and how to consider the inevitable collateral damage. “To put it simply, we first care for the victim(s) and do all that we can to ensure their safety. Only after the victim’s safety is assured, and with her advice and consent, do we begin working with the person who is acting abusively. Only after those two tasks are well underway can we consider the possibility of a third. If the victim is safe and willing, is healing from the trauma of the abuse, and the abuser is no longer exhibiting abusive patterns and is responding well to ongoing accountability, then efforts at reviving or reconciling the marriage will be much more successful. You must neither get this triage out of order nor fast-track it.”

In the third and final part, the authors turn from the initial response to long-term care. They want their readers to help the person who has suffered domestic abuse to advance from being a victim to being an overcomer and to help the person who has committed domestic abuse to advance from being an abuser to being a servant. They want church leaders to lead their congregation in such a way that it responds with wisdom and compassion, that it offers true and substantial hope, help, and healing.y

A series of appendices offer counsel on a number of further issues such as false allegations; separation, divorce, and remarriage; finding trauma counselors; taking advantage of national and state domestic violence resources; and those occasions when more typical roles are reversed so that a husband finds himself a victim of his wife’s abuse.

When Home Hurts is exactly the book I had hoped it would be when I picked it up. It is a book that will do what it promises—help well-meaning but inadequately-trained Christians to respond well to very difficult situations. It will give them confidence that they can be truly helpful in truly crucial times. I suggest reading it through once outside of a given situation, then keeping it on-hand to serve its purpose at those times when you are called upon to walk alongside a victim.

“We want you to be sure that God will be with you as you enter into this situation,” say the authors. “We know it’s not easy being a pastor, church leader, family member, or friend facing such a difficult situation. But rest assured, the Lord desires that we respond wisely, and He will supply the wisdom to do so. In fact, you get the privilege of displaying the heart of God— kind, stable, self-giving—to people who’ve had the opposite displayed to them. You get to be an agent of God’s love for someone who may have forgotten what real love is—and what it looks like in the family of God.” It’s for these very reasons that I give this book my highest recommendation.