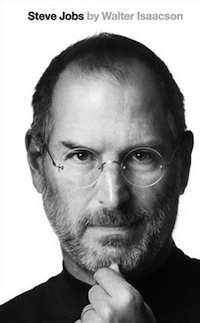 Buy from Amazon
It had not been deliberately planned that Walter Isaacson’s biography of Steve Jobs would release just days after Jobs died. Not really. Jobs had known for many years that he could not keep his cancer at bay forever and he had specifically asked Isaacson to be his biographer. The book was completed, the publication date set, and then Jobs’ condition worsened and he died. And so it happened that a biography–a real biography, not a quick-to-the-presses tabloid pseud-biography–arrived on store shelves so quickly after the death of its subject.

Over the past several years Isaacson had been given almost unfettered access into Jobs’ life and world. He recorded close to 40 interviews and spoke extensively with family, friends and enemies. This led to a biography that goes deep into the world of its subject and unearths the good, the bad, the shocking and the inspiring. It is an utterly fascinating biography–easily one of the most interesting I’ve read. That may owe, at least in part, to the fact that Jobs impacted my own life through the devices he created–many of which I use every day (and one of which I am using as I type these words). What is undeniable, whether you use Apple products or not, is that Jobs was a fascinating character who had a profound effect on the world in which he lived. Whether his legacy is judged to be good or bad, he certainly left a legacy that has touched the entire world.

I do not intend to write a review of this biography as much as I would like to make a couple of observations about it.

Let’s get one thing out of the way up-front–the thing that has been the subject of thousands of articles and blog posts in the week since the biography was released. Steve Jobs was not a nice person. In fact, he was often downright horrible, bearing lifelong grudges, throwing tantrums and berating the people who worked for him and with him. He seemed to have a binary view of the world where some things were wonderful and other things were horrible; there was little space between. He despised the mediocre or even the merely good. He used his keen intuition about other people to find and then exploit their vulnerabilities in a way that maximized the hurt he could inflict upon them. He was a brutal boss and a brutal man. He was the kind of man who would praise his own parents for adopting him and then pretty much abandon his own daughter.

While examples of his temper and tantrums have been widely discussed and dissected, I think a lot of people have missed the root of it all. Jobs was a lifelong student of Eastern religion and Zen Buddhism in particular. Along the way he became convinced that he was an enlightened being, that he existed on a higher plane than most people. From this exalted position he was able to see and to judge; he had the right to. He was able to stand, if not in the place of God, at least in the place of a judge. He felt that it was his right to speak the truth–the truth as he understood it–to others. After all, he was enlightened and they were not. His arrogance knew no bounds.

A brutal man with a terrible temper and a genuine god complex, he was also a man who drove people to new heights of innovation and creativity. As much as people hated to receive a tongue-lashing from Jobs, they knew that in the end he motivated them and pushed them to do better. And this is a crucial component of the strange legacy of Steve Jobs. He will forever be known as a great innovator and a man who lived at the crossroads between the humanities and the sciences. In his own field and in his own way, he sought to make the world a better place. But he did so at the expense of so many people whom he left abandoned and brutalized. It’s like he cared for humanity but not for humans, for mankind but not for individuals.

As I thought about this, I began to wonder what truly motivated Jobs. What was it that drove him. He was not motivated by accumulating wealth. He died a very rich man, but was not ostentatious, at least when compared to other super-rich people. He was not motivated by philanthropy and, in fact, had little use for it (His wife ran a program for disadvantaged teens and, while he said he was proud of her, he didn’t ever bother to visit). So what was it that drove him and made him so unrelenting in his drive for perfection, in his drive to create things that would stand the test of time?

I think it may be a desire for immortality. Jobs was always convinced that he would die at a relatively young age–a premonition that proved true. This then drove him to create things that would outlast him. Though his body would die, he could leave behind a company. His greatest and proudest creation was not a gadget, but a corporation; he wanted to leave Apple–the essence of the company–as his legacy to future generations. That is what I found as the subtle and perhaps unwitting theme of this biography–Jobs’ knowledge that he was mortal and his desire to be immortal.

That is the biography. Allow me to comment on the biographer. Everyone who knew Jobs spoke of a reality distortion field that surrounded him. This was the way people described his charisma and his way of making people bend to his will. He would demand the impossible and somehow make people achieve it. He existed in this place where the world and everyone in it had to bend to him. It almost seemed to come as a surprise to him that he could not will away the cancer that began to ravage his body (and it was certainly not for lack of trying; one of his cancer treatments involved things as strange as expressing all of his negative feelings). Walter Isaacson documents countless examples of people coming into Jobs’ reality distortion field and then quickly falling under his sway.

The question is, could the biographer avoid the pull of that field, or would he too fall into it? For the biographer to remain objective about his subject, he would need to remain outside that field. Did Isaacson succeed? I am not convinced that he did. It seems that over the course of the book, Isaacson’s writing changes. By the end he is not just describing products, but offering gushing editorials about them. Meanwhile, the negative side of Jobs is downplayed in favor of his innovation. I suppose we cannot know for sure, but it seemed to me like Isaacson may have been yet another person who fell under the mysterious sway of Steve Jobs. This does not lessen the biography, but I guess it does show that the definitive account of the man’s life may need to wait for a future biographer.

As I said from the outset, I found this a particularly compelling biography. Jobs was clearly a very complex individual and Isaacson has succeeded in creating a fascinating character study. I learned a lot from reading it and am still trying to absorb and express those lessons. As is often the case when I read a biography, it will undoubtedly take several weeks or months for it all to settle.

I learned earlier today that Steve Jobs’ last words were, “Oh wow. Oh wow. Oh wow.” What I wouldn’t give to know what it was that he understood or perceived in those last moments. I wonder if he finally understood futility, that in all of his creativity, in all of his enlightenment, that he had missed the truest light of all.