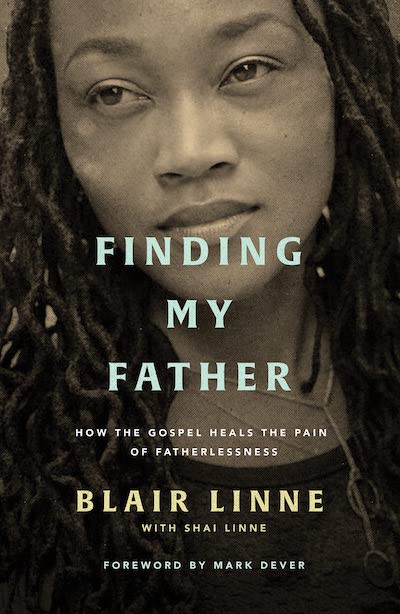 Sometimes one person’s story can stand in for that of millions. Sometimes one person can explain a situation that affects not only themselves but also countless others. Those of us who were blessed to grow up with fathers who were present, active, and engaged may struggle to understand the particular sorrows and challenges that come to those whose fathers were detached, uninvolved, or perhaps entirely absent. Blair Linne’s Finding My Father: How the Gospel Heals the Pain of Fatherlessness tells her own story but, in its own way, tells the story of so many other people as well.

She begins in this way: “The section on my birth certificate reserved for my father’s name is blank. The inside of the narrow, barren horizontal box has neither been struck through nor erased. It simply lies willfully untouched. So my birth certificate, like many others, tells by omission the story of a mother and father who were never married. This piece of paper was seldom referred to. It almost didn’t exist at all, because I almost did not.”

Her mother was young when she had her first child and was young still when she became pregnant with her second. She determined she would pursue an abortion, but was dissuaded by a pastor and soon gave birth to Blair. And while Blair was much loved by her mother, she remained distant from her father—or the man she believed was her father. But that story is her’s and is best told in her own words.

The reason I read her book is that I know a number of people who have grown up without fathers and I am eager to know how to better love, serve, and support them. I know that to do that, I will need to better understand the particular struggles that are theirs. And I’m glad to say that Finding My Father has proven helpful.

Linne describes why, despite the insistence of our culture, a mother cannot be a father. “For understandable reasons, our culture tells us every day that women like her can [replace a dad]. This world pushes for a merging of parental roles. The media portrays men as inept, while women are warriors—especially Black women … Some women hint or shout out that they don’t need a man or a father. I know from experience that these things are usually said to cover the hurt: I will say I don’t need you before you show you don’t need me. But despite all that, the truth is that men are important and dads are needed. Mothers have a different calling than men. My mother was never created to take my dad’s place, any more than he could have taken hers.”

She explains why fatherlessness is so often a predictor of certain struggles and patterns of sin: “When I was younger, I thought that having my dad in our home would solve all of my problems. I thought that the presence of a father would fix everything that the absence of a father had broken. And I was right to sense that. Studies show that poverty, teen pregnancy, obesity, drug and alcohol use, criminal activity, infant mortality, and behavioral problems are all linked to fatherlessness. And this doesn’t even begin to get to the spiritual implications.”

She tells how she has come to understand fatherhood as heavenly before it is earthly, as a description of God before a description of any man. She explains how the church is able to step into the void left by absent fathers and provide some of what they have not or will not. “In church, fellow believers become our spiritual brothers, sisters, mothers, and fathers. Although we may not have had a dad, we can pray that God will send us a family in our church that will be willing to care for us and provide us with a father-figure who will be the masculine influence we need for our development. After all, in Christ, we actually have more in common with a father-figure who is a believer than we do with a biological father who is not. There are some things our fathers would have taught us had they been there. Since they were not, we’ve been left to figure these things out by ourselves. This is not God’s plan, since he has not left us alone. We have a church family to help us walk through life.”

In one chapter she hands the pen to her husband Shai who explains how he has been able to become the dad he himself never had. “Back when Blair and I first started talking, we were both struck by how similar our family backgrounds were. We were both adult converts who were raised in urban areas by single mothers. We both had fathers who were in and out of our lives. We both had a lot of brokenness and instability in our families. One of the things that excited us about coming together was the prospect of a fresh start. I’m a firm believer in the idea that just one godly married couple can have a lasting impact on many generations that follow them. As we looked in our family trees, we didn’t see that couple. We believed that the Lord was giving us an opportunity to be that couple.” And by God’s grace they are, indeed, becoming that very couple.

Finding My Father is a book that deals biblically and compassionately with a sorrow that is familiar to so many. It is no cold textbook on the matter, but rather a warm and compelling account of one daughter’s desire to know her dad and be known by him, to love and be loved. I expect that many who know that sorrow will blessed and encouraged by it; I expect that many who do not know that sorrow will be better equipped to serve those who do.