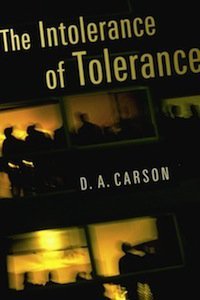 Buy from Amazon Buy from WTS Bookstore
Several times in the past decade D.A. Carson has been asked to give a public lecture at one university or another. Three times he has taken the opportunity to speak on the subject of tolerance, or intolerance, as the case may be. Those lectures proved the foundation of what would become his cleverly-titled new book, The Intolerance of Tolerance.

Here’s the thing: In a society obsessed with tolerance, we are actually not tolerant at all. It’s all a big lie, a big fiction, and we’re all playing along. In order to claim tolerance we’ve had to rewrite the definition of the term and in so doing we’ve put ourselves on dangerous ground. Tolerance has become part of the Western “plausability structure”–a stance that is assumed and is not to be questioned. We are to be tolerant at all times. Well, almost all times, that is.

Carson begins by showing that tolerance presupposes disagreement. That’s the beauty of being tolerant–one person expresses disagreement with another but still tolerates him, accepting that differing views exists even while holding fast to his own. He puts up with another person even though they do not believe the same thing. But over time there has been a subtle, and sometimes not-so-subtle shift in the word’s meaning. Today’s version of tolerance actually accepts all differing views. We’ve gone from accepting the existence of other views to believing that we need to accept all differing views. This brings us into the natural outworking of postmodernism, a philosophy that denies the singular nature of truth.

Things get trickier still when we see that tolerance is not considered merely a virtue today, but the cardinal virtue, the virtue above all others. “Intolerance is no longer a refusal to allow contrary opinions to say their piece in public, but must be understood to be any questioning or contradicting the view that all opinions are equal in value, that all worldviews have equal worth, that all stances are equally valid. To question such postmodern axioms is by definition intolerant.” To quote Carson, “Oh dear.”

Tolerance rules today with one important caveat. There can be no tolerance for people who do not agree with the contemporary usage of the term. People like Christians, for example. Those who hold to the old meaning, that I will tolerate you even though I believe that you are wrong, sinful even–there can be no tolerance for people like that. Hence this new tolerance is inherently intolerant.

The Intolerance of Tolerance explains this strange new definition, traces its development, shows how it is particularly opposed to Christianity, and discusses what we stand to lose if this intolerant new tolerance continues to reign in society. Carson closes by suggesting ten ways ahead–ten suggestions that each of us can adopt if we wish to combat the new tolerance.

This is not just a book for smart people, but you’ll find it helps. If you’re really smart and well-read you can probably read it once with pretty good comprehension. If you’re like me, you’ll need at least two readings and even then be scratching your head at times. It’s not that it’s exceedingly dense or difficult, but that it deals with categories that are unfamiliar. At least that was my experience. But I’m glad I read it as it helped me crystalize exactly what I’ve seen going on all around me. It’s given me the parameters I need to ensure that I don’t inadvertently lose the better meaning of tolerance and it has given me fair warning of the consequences should I do so.