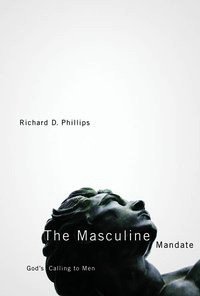 Buy from Amazon Buy from WTS Bookstore
There is little doubt that masculinity has fallen upon hard times. Differences between men and women, between masculinity and femininity are downplayed in favor of sameness, in favor of androgyny. Suggesting that the biblical vision of masculinity has fallen prey to a foolish culture, Richard Phillips writes that his new book The Masculine Mandate “is written for Christian men who not only don’t want to lose that precious biblical understanding, but who want to live out the calling to true manliness God has given us. We need to be godly men, and the Bible presents a Masculine Mandate for us to follow and fulfill. But do we know what it is? My aim in writing this book is to help men to know and fulfill the Lord’s calling as it is presented so clearly to us in God’s Word.”

Looking to God’s command to the first man in the Garden of Eden, Phillips teaches that men have a dual calling before the Creator: they are to work and they are to keep. “To work it and to keep it: here is the how of biblical masculinity, the mandate of Scripture for males. It is my mandate in this book, therefore, to seek to specify, clarify, and apply these two verbs to the glorious, God-given, lifelong project of masculine living.” To work is to labor to make things grow, to nurture, cultivate, tend, build up, guide and rule. To keep is to protect and to sustain progress that has already been achieved. It involves guarding, keeping safe, watching over, caring for, maintaining. Words that may be useful in summarizing the terms are service and leadership, terms closely related to servant and lord. Men are to be servants and lords under the authority of God. “This is the Masculine Mandate: to be spiritual men placed in real-world, God-defined relationships, as lords and servants under God, to bear God’s fruit by serving and leading.”

Through a short series of chapters Phillips provides the doctrinal underpinning for this mandate. He looks at a man’s sacred calling to work, to bear the image of God and to be a “Shepherd-Lord,” one who tends and cares for all the responsibilities God has placed him over. He looks both to calling and to character, showing how a man must live if he wishes to carry out his mandate in each area of life.

The book’s second part provides wisdom on living out that mandate. Since most men will find that a significant portion of their mandate involves the marriage relationship, Phillips writes three chapters dealing with the design of marriage, the redemption of marriage, and the way to live out both working and keeping within that relationship. He spends two chapters looking at discipling and disciplining children and then shows how the Masculine Mandate plays out in friendship with other men and then in the context of the local church.

I found The Masculine Mandate helpful on several levels. I appreciated that Phillips defined a man’s role independent of marriage. This is a trap many authors have been unable to avoid. Yet many men will remain single all their lives and this in no way reduces their masculinity. Jesus himself never married and was more of a man than any of us! And Jesus, despite never marrying, devoted his life to both working and keeping. At the same time, I admired Phillips’ call to most men most of the time to get married. Marriage is, for the majority of us, a way God calls us to fulfill our mandate and too many Christian men seem eager to view marriage through a worldly lens. I appreciated as well that Phillips spoke both from Scripture and from personal experience. Many of his examples and exhortations were based on examinations of passages of Scriptures; many more were drawn from his own life and experience. It makes for a powerful combination.

Well-written and presenting tough truths within such a simple grid of work and keep, this book is a very useful call for men to live out their mandate before God. I feel challenged and equipped for having read it and am glad to recommend it to any man. Read it, apply it, live it.