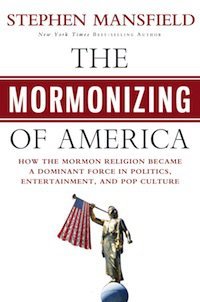 Buy from Amazon
When on vacation last week I ambled into a wonderful little used book store in Fredericksburg, Virginia. There were hundreds of books that caught my eye there, but I left with only one—Faith and Betrayal, by Sally Denton, a biography that traces the life of Jean Rio, the author’s great-great-grandmother. One of England’s earliest and most notable converts to Mormonism, Rio set out from England to Utah in the 1850’s to settle down in Zion (which is to say, Salt Lake City, Utah). The book describes her journey, her arrival, and her eventual disillusionment as she comes to see the ugly underbelly of Mormonism—the violence, the polygamy, the greed and the utter hypocrisy of it all. It was a fascinating little book.

While Faith and Betrayal was interesting as history and biography, I read it at least in part because of an interest I have in Mormonism. It seems that the Church of Jesus Christ of Latter Day Saints is coming into its own in recent days. Mormons tend to be high achievers and are increasingly finding their way into positions of power and influence, whether that is as CEO of a multi-billion dollar company or as a presidential candidate.

Faith and Betrayal was a ground-level look at Mormonism’s earliest days that generated as many questions as it answered. I followed it with another of Denton’s books, American Massacre: The Tragedy at Mountain Meadows which describes an act of barbarism in which early Mormons slaughtered over 100 members of a wagon train that was passing through their land. Moving to more modern times (and dealing with the fact that by this time I could read only what was available on the Kindle), I turned to Jon Krakauer’s Under the Banner of Heaven, a book that focuses on modern day Mormon Fundamentalism. Krakauer seems to want to paint all Mormonism as related to the polygamous fundamentalists and, having done that, to paint all adherents of religion as fundamentalists. It is interesting, but goes beyond anti-Mormonism to the verge of anti-faith.

After all of this, I read Stephen Mansfield’s The Mormonizing of America. Published just this month, it looks at the growing popularity of Mormonism and tries to understand how this came to be and what it all means. Mansfield is a former pastor and bestselling author whose previous books have included The Faith of George W. Bush, The Faith of the American Soldier and The Faith of Barack Obama. I get the sense that he is something of a religious enthusiast and that he is not a serious historian. Nevertheless, I appreciated his brief overview of Mormon history and his look at how the faith has evolved to our day. There were three big takeaways for me.

The first is that Mormonism still has to overcome its past. As the spotlight is turned to Mormonism, it will need to deal with the fact that it has an ugly, embarrassing past. Few religions have a founder or great prophet quite like Joseph Smith, a polygamous, philandering, ego-centric, irrational, confidence trickster. Massively proud and profoundly charismatic, he was able to convince thousands of people, and then tens of thousands, to do his bidding. His successor Brigham Young was no better, another polygamous sociopath who presided over a reign of terror in Utah. Young bore much of the responsibility for the Mountain Meadow massacre which slaughtered over 100 men, women and child. These are just a few of the skeletons in Mormonism’s closet.

The second is that Mormonism is built upon “facts” that have since been disproven; many that have not yet been disproven still have no proof. DNA evidence has shown that the Native Americans are not related to the Jews as Smith claimed. The language of Reformed Egyptian, the language of the Book of Mormon that Smith had to translate, has not been shown to exist anywhere else in the world. He claimed there were horses in the New World before Columbus when it is clear there were not. It goes on and on, fact upon fact that are just plain wrong.

The third big takeaway has to do with relating to Mormons, and this may be the most important of all. One of the keys to understanding Mormons is to understand that they are not theologians. In fact there are relatively few Mormon theologians and most of the people who really concern themselves with systematizing Mormon theology are Christians who are trying to understand it in order to refute it. The Mormon leaders are not schooled in theology beyond the very, very basics.

Instead, Mormonism is an experiential religion. If you talk to a Mormon neighbor and point out inconsistencies between the Bible and the Book of Mormon, he will tell you how his faith has strengthened his family. If you show that Joseph Smith was an adulterer and egomaniac, he will tell you that his business is thriving because of the principles of Mormonism. He may well be right. Mormonism’s focus on the here and now, its focus on family, really do build strong leaders and strong families and this in an age where so many families are weak and crumbling.

I think this is really helpful to know when interacting with Mormons–they do not know their own theology and, in fact, may not even really care about it. So how, then, do you interact with a Mormon? I would simply ensure that you preach the gospel, being sure to point out his sinfulness and Christ’s provision for that sin. This is one area that Mormonism addresses only by the empty promise of good deeds.

The Mormonizing of America is a book I’d recommend as a primer on Mormon history and, more so, as a means of understanding why Mormonism has gained such popularity in recent days.