My friends know of my strange affection for bizarre ChurchMerch. A while back I posted some photos of Joel Osteen’s Your Best Life Now board game. A little while ago we had some friends over to give it a shot. It was horrifying beyond all imagining. In fact, it was completely unplayable. It really made no sense at all. But we all did enjoy the part where we had to look into a mirror and say affirming things about ourselves (No joke! That’s actually a component of the game). Here I am holding on to my miracle. This was about as much as the game offered… 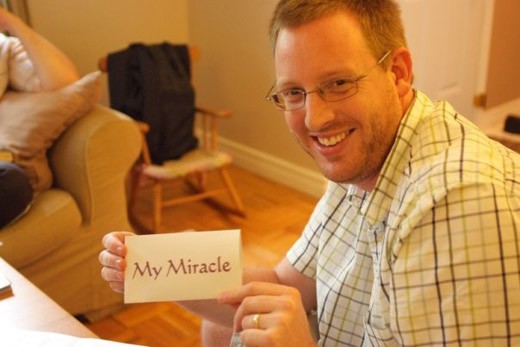 And here’s the gang, listening attentively as we try to untangle the ridiculous instructions: 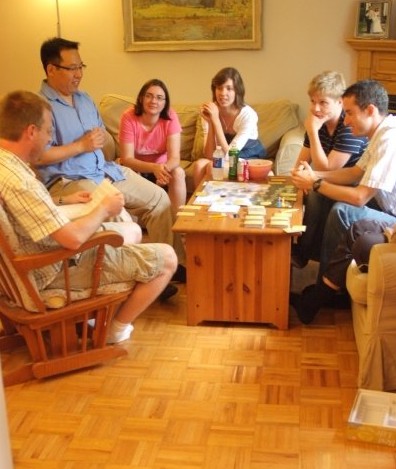 Anyway, Your Best Life Now is very clearly a leading candidate for the title of the worst board game ever.

But then my friend Chisso surprised me with the gift of another gem. It is a board game (“Table Game Box”) called Rich Daddy God. He did some research and came up with the story behind it. Apparently it was created in Taiwan by Mesiah Enterprise Co. specifically for the Chinese Christian market. It was then translated into English and exported. I tried to find more information about it but came up dry. It is one of the few times that Google has completed abandoned me. 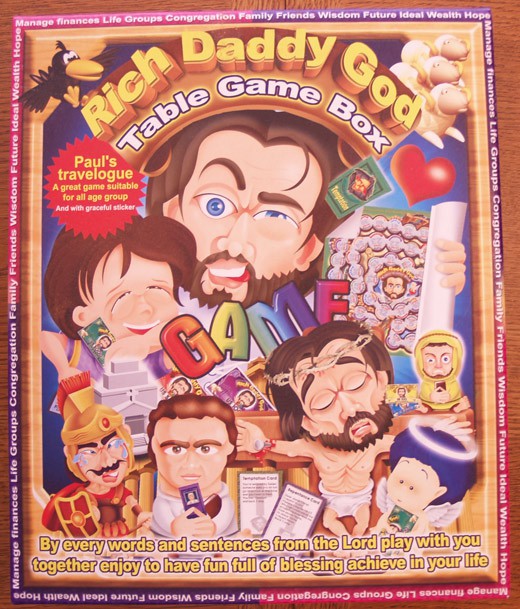 The game basically plays like Monopoly, at least in so far as I could figure out the instructions. In place of properties are the cities that Paul traveled to during his three missionary journeys. Instead of buying properties you build churches. And instead of paying rent when landing on a space that is already-owned, you have to pay a tithe of the total value of that property as an “offering.” In place of a banker is an angel. Play continues either for a set amount of time or until all the players are bankrupt (though I assume they actually mean all the players but one). There are a few other rules, such as upgrading a church to an international church much as one upgrades a house to a hotel in Monopoly. But the rules take only two pages to explain so are quite basic.

There are four characters in the game: Timothy, Paul, Barnabas and Philemon. This must be the only game in the world that allows you to play Philemon!

(Click through to read the rest of the article…)

Timothy (in the yellow robe) is my personal favorite (and be sure to check out the picture of him on the box). This must be the face he made while Paul circumcised him. Philemon (second from the right) looks like a Mafia hit man while Barnabas (far left) looks inebriated and Paul (far right) looks like a televangelist. 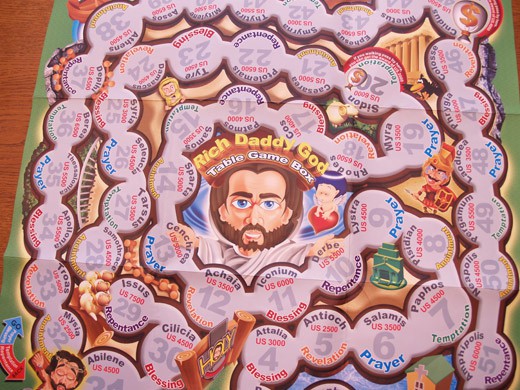 The game board simply lists the various cities Paul passed through on his journeys. There are the equivalent of two “Go” spaces where the player is given an injection of cash. Each city has a value (if you wish to buy a church there). 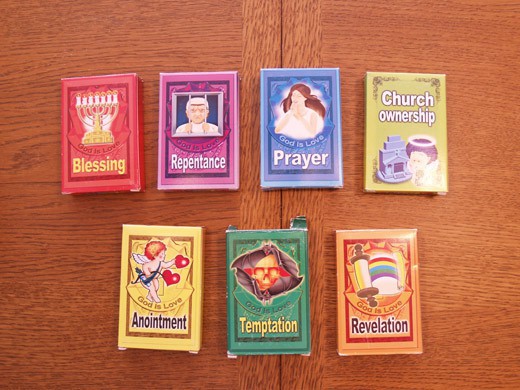 In a major difference from Monopoly, the cities also have cards associated with them. Players are given these cards when they land on any of the churches. The type of card the player receives varies depending on what church he lands on. The types of card are: Revelation, Blessing, Prayer, Repentance, Anointment and Temptation. Most of them include some kind of a penalty. Some of the cards are, in a word, bizarre.

Here are a few of the more notable ones: 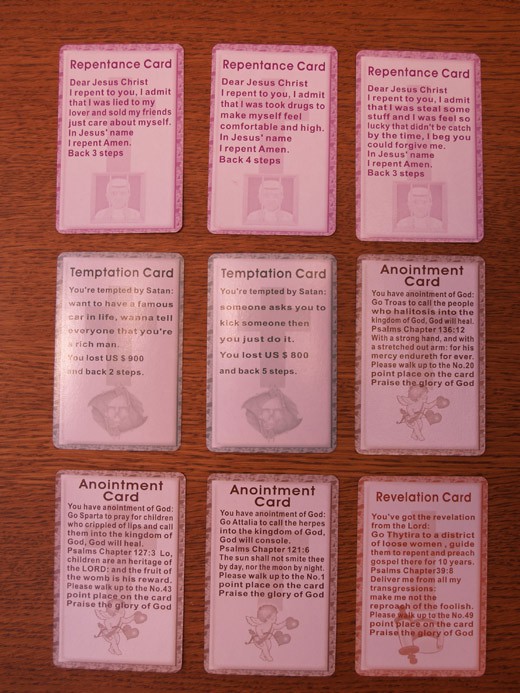 “You’re tempted by Satan: want to have famous car in life, wanna tell everyone that you’re a rich man. You lose US $900 and back two steps.” “Dear Jesus Christ I repent to you, I admit that I was lied to my lover and sold my friends just care about myself. In Jesus’ name I repent Amen. Back 3 steps.” “You have anointment of God: Go Troas to call the people who halitosis into the kingdom of God. God will heal.” And so on. They get stranger and stranger.

And you know you wanted to see the “graceful sticker” that is referenced on the cover. Well, here it is. Isn’t it graceful? 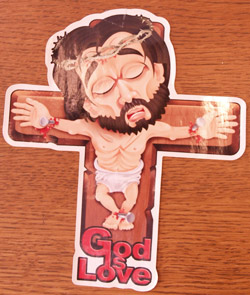 While we have not yet tried playing Rich Daddy God, neither do we expect to. It looks even more unplayable than Your Best Life Now and it’s probably less fun. And yet somehow it exists. It seems that Mesiah Enterprises Co. has disappeared, or at least that they have stopped distributing this game. I doubt anyone will mourn its passing. But at least they’ve given me a swell new game for my collection. I’ll treasure it always.