My focus is on newer commentaries (at least in part because most of the classics are now freely or cheaply available) and I am offering approximately 5 recommendations for each book of the Bible, alternating between the Old Testament and the New. Today I have turned to the experts to find what they say about 1 & 2 Kings. 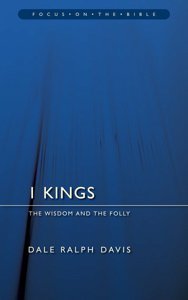 Dale Ralph Davis – 1 Kings, 2 Kings (Focus on the Bible). Compared to many of the Old Testament books, and especially historical books, it seems that there is a quite a good selection of excellent volumes on Kings. At the top of the list is Dale Ralph Davis’ volumes. (You may note that his volumes were also commended for Joshua, Judges, 1 Samuel and 2 Samuel.) Davis’ work is ideal for layperson and scholar alike and will be an invaluable aid to understanding and applying these books. (Amazon: 1 Kings, 2 Kings; Westminster Books: 1 Kings, 2 Kings)

Iain W. Provan – 1 and 2 Kings (New International Biblical Commentary). Provan receives the only 5-star recommendation from Tremper Longman who says, “The writing is accessible, and the emphasis is on literary and theological issues, though the notes also address particular exegetical issues.” Longman’s only complaint is that in keeping with the strictures of the NIBC series, the volume is too brief. (Amazon, Westminster Books) 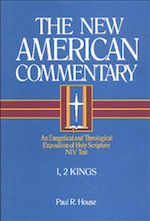 Paul R. House – 1, 2 Kings (New American Commentary). House’s commentary is widely praised and finds its way onto almost every one of the experts’ lists. Keith Mathison says, “This is the commentary to which pastors should turn if they are seeking more exegetical detail than is found in the works of Davis mentioned above. House explores historical, literary, canonical, theological, and applicational concerns thoroughly and competently. Highly recommended.” (Amazon)

Donald J. Wiseman – 1 & 2 Kings (Tyndale Old Testament Commentaries). Wiseman is known and appreciated for his extensive scholarship in Near Eastern literature and archaeology and those interests represent the greatest strengths in his volume on 1 & 2 Kings. While this volume may be slightly more complex than others in the NOTC series, it is still appropriate for any reader, though Longman suggests that Wiseman’s commentary is less valuable than his historical and literary insights. (Amazon, Westminster Books) 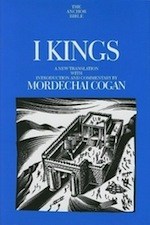 Mordechai Cogan & Hayim Tadmor – 1 Kings, 2 Kings (Anchor Yale Bible Commentaries). Cogan and Tadmore together wrote the volume on 2 Kings; a decade later Cogan alone produced the volume on 1 Kings. Mathison both commends them and warns of their weakness: “These commentaries are written from a somewhat critical perspective and should be used with care, but the author’s knowledge of the ancient Near Eastern context makes these works very helpful for those interested in more technical commentaries.” (Amazon: 1 Kings, 2 Kings)

One volume that will surely end up on the list sooner or later is Philip Ryken’s contribution to the Reformed Expository Commentary set (Amazon, Westminster Books); the reviewers have simply not had time to catch up to the newer commentaries.

Let me close with a couple of questions: What are your preferred commentaries on 1 & 2 Kings? Are there some you’ve found particularly helpful for preaching or for devotional purposes?