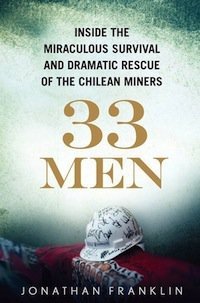 Buy from Amazon
As a social experiment it could hardly have been devised better. Put 33 men 2300 feet underground and seal them in with limited supplies and with no guarantee that they will be rescued. Then leave them there for 69 days. What would happen? Would they divide into packs and begin to destroy one another a la Lord of the Flies? Would they resort to cannibalism? Would they resort to homosexuality? These are the questions people were asking when just such an accident happened at the San Jose copper-gold mine in the Atacama Desert near Copiapo, Chile. 33 men were trapped when a slab of rock the size of a skyscraper came between them and the outside world. And all the world watched to see if they could be saved from their tomb.

The last man was rescued from that mine on the 13th of October, 2010. On February 14, 2011 33 Men hit store shelves, a book detailing the disaster and response. 4 months. That hardly seems like enough time to write a book, not to mention fact-check it and edit it and print it. But I’ve got to say, this isn’t a bad book at all. It’s well-written and engaging and, as far as I can tell, quite accurate.

What I find particularly interesting is not the disaster in itself. A mine collapsed, men were trapped and a massive rescue operation was launched. It’s a good story. But what was even more interesting to me were the social, psychological and spiritual dynamics. What would happen when 33 men were trapped deep underground, completely isolated for 17 days and then then in touch with the world but still cut off for a further 52 days? What kind of society would develop? How would the men behave?

Quite well, it seems. At least, initially. The first day or two was rough as the men struggled to adapt to their new reality. “As those first hours passed, the thirty-three miners began to act like a roaming band of hungry animals, haphazardly s——g and urinating throughout their reduced world. Ignoring calls for group unity, they set up disparate caves in random corners of the tunnel. Few of the men slept that first night.”

But it did not take long for the men to begin some kind of order. They divided into 3 camps, but remained relatively peaceful. “By 6:30 am on Day 3 the men were awake and ready for prayer. Henriquez was cheerful and promised that God would respond to their prayers. Every day that passed, his sermons and prayers felt like a lifeline, a single feature to grab on to and hold tight. The rescue might or might not be coming close, but the miner’s faith was helping sustain them. They began to refer to Jesus as ‘the thirty-fourth miner.'” If there are no atheists in foxholes it seems that there are none trapped in mines either; even the least devout was driven to his knees in desperation.

There were some power struggles, but quickly the men settled into a routine. A leader stepped up. They divided the food equitably, each consuming about 100 calories a day–not nearly enough to sustain them for any time. But in their desperation they allowed themselves to be led and they carried on with some semblance of order. On day 17 a drill head popped into their world and with it a link to the outside world.

With this link to the world came trouble. Though that link was nothing more than a 3.5 inch tube, it was a conduit for a surprising number of items. Some where the very stuff of life–food and medicine. But there also came drugs–marijuana and amphetamines. Those on the ground even investigated a way of sending blow-up sex dolls down the tube, but finally settled for passing along a quantity of pornography (something you probably don’t remember seeing on CNN). Down the tube came a projector and a screen. And down another tube came a communications cable. And now the men had television. “What really screwed us up was the TV. When the TV arrived, it ruined the communications, it was a big problem… Some of the guys would just stare at it; they were hypnotized and watched it all day. … Fights and arguments erupted from the constant battle over which channel to watch. Urzua called up and complained that the TV was ‘destroying the organization’ and asked for the broadcasts to be limited to news, some soccer and the occasional movie.”

When the men began to achieve some level of celebrity, 2300 feet below the surface, even more problems began. “Divisions among the group began to surge. Luis Urzua was unhappy that some of the miners … had acquired a video camera and were filming the others. And when a copy of Ya magazine arrived with an interview in which Sepluveda bragged that he was ‘the leader’ of the pack, further squabbles erupted.” Soon the men were fighting over who would be their representative to the outside world. A public relations expert was called in to coach them on the fame that would await when they were rescued. Pacts were drawn up to promise that all money would be divided equitably and that none of them would speak of certain events that had happened far below. Those pacts wouldn’t survive the first twenty-four hours after rescue, a rescue that was watched by up to a billion people worldwide.

This event brought out the best and the worst of those above ground and those below. For every noble and selfless deed there was another ugly and self-serving one. For every good guy there was a bad guy, for every smile a tear. It’s a fascinating little study of humanity.

What did I learn from 33 Men? I learned that people crave order and authority. Though we tend to rebel against both of these, we hate their absence even more than their presence. When these men were trapped outside of society’s structures of authority, they quickly created their own. They knew that they would need them in order to survive.

And I know that there is a further lesson in what happened with the establishment of that link to the outside world. There was the draw of fame that caused the men to begin to turn on one another. That thin tube brought them life in food and medicine, but it also brought death in drugs and fame and pornography. I just can’t crystallize that lesson in my mind. Without that tube they would have died, but even with that tube some kind of death came into that mine. It was a great blessing and it was a great curse.

33 Men is just the first of what is bound to be many books on the disaster and rescue. I doubt it will prove the best. But it’s a good start and well worth a quick read.