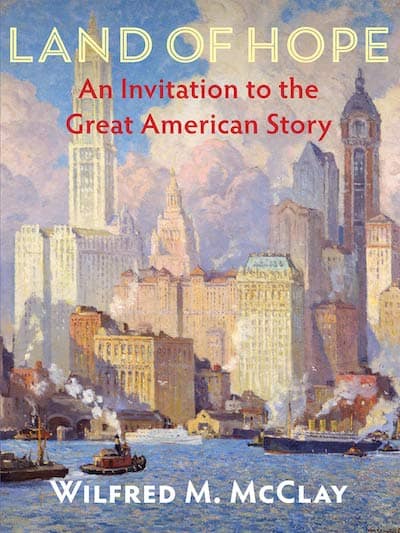 It’s not an easy thing to tell the history of a nation. And, in fact, there are many different ways to do so. At least when it comes to the history of Western nations, the past few years seem to have marked a great shift in this regard. When I was young, the history of these nations was usually told in the voice of triumph—what they had done well defined their story while what they had done poorly was mostly overlooked. Today, the history of these nations seems to be told in the voice of shame—what nations have done poorly defines their story while what they have done well is largely overlooked. Which is to say, the way I learned history in the 80s is very different from the way kids learn history today.

The truth, of course, lies somewhere between these poles. Nations are made up of human beings and, therefore, their histories are full of great triumphs, great horrors, and great contradictions between the two. This is the tension any historian faces, and the tension Wilfred McClay faced in preparing Land of Hope: An Invitation to the Great American Story, his new telling of the history of the United States of America. “Its principal objective is very simple,” he writes. “It means to offer to American readers, young and old alike, an accurate, responsible, coherent, persuasive, and inspiring narrative of their own country—an account that will inform and deepen their sense of the land they inhabit and equip them for the privilege and responsibilities of citizenship.” He sets out to tell the history of America as a story, for “we are, at our core, remembering and story-making creatures, and stories are one of the chief ways we find meaning in the flow of events.” To do this, he focuses primarily on the political history of the nation, using that as the skeleton of the story, then filling it out as appropriate. After all, “the skeleton is not the whole of the body—but there cannot be a functional body without it.”

Land of Hope is intended to be a fresh, inspirational, and readable history of America, and in all those ways it succeeds well. In fact, I’d say it’s the best history of any nation I’ve ever read. It is exceptional because of the deep knowledge of the author and because of his skill with the pen—he is an excellent writer and succeeds well in bringing history to life. The book drew me in and held my attention from Columbus to Trump. It is exceptional because it is just the right length to tell its story briskly and without ever bogging down in detail. It is exceptional also because of McClay’s unwillingness to define America only by her national sins or only by her national triumphs. He remembers that

the history of the United States, and of the West more generally, includes the activity of searching self-criticism as part of its foundational makeup. There is immense hope implicit in that process, if we go about it in the right way. That means approaching the work of criticism with constructive intentions and a certain generosity that flows from the mature awareness that none of us is perfect and that we should therefore judge others as we would ourselves wish to be judged, blending justice and mercy. One of the worst sins of the present—not just ours but any present—is its tendency to condescend toward the past, which is much easier to do when one doesn’t trouble to know the full context of that past or try to grasp the nature of its challenges as they presented themselves at the time.

McClay’s book, then, reflects his effort “to counteract that condescension and remind us of how remarkable were the achievements of those who came before us, how much we are indebted to them.” Yet all this without ignoring or excusing what they did so poorly. In my assessment, he gets this balance just right.

Though I am not American, and though the book’s purpose is specifically to inform and inspire American citizens, I enjoyed it tremendously. I highly recommend it for Americans and non-Americans alike, for it does what it promises—it tells the exceptional history of an exceptional nation.