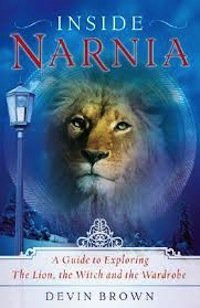 Buy from Amazon
Inside Narnia was one of the many books published in advance of the recent movie adaptation of C.S. Lewis’s The Lion, The Witch, and the Wardrobe. In this book Devin Brown, a Lewis scholar and aficionado, offers a detailed look into the world of Narnia, digging far beyond the surface, and exploring this magical world. Having just read The Lion, The Witch, and the Wardrobe with my children, I decided to read this as a commentary of sorts, to see what I had missed and what I would want to look for the next time I read the book.

Brown begins the book just where he should: with a rationale for the book’s existence. There are, after all, many similar titles available. He replies that the strongest reason for any new work must be that it first takes an approach not taken before and then must cover ground that has not been covered before. He does both of these. His approach to the story is in the first place literary rather than primarily devotional. He moves through the book chapter-by-chapter, providing literary analysis and supplying “a good deal of supplemental information from Lewis’s life and other writings.” He also offers comments and opinions from a wide variety of other scholars. In many ways the book is a running commentary rather than a collection of essays. “My claim is this: although The Lion, The Witch, and the Wardrobe can be simply read and enjoyed by a child, it can also be read seriously by adults because it is a work rich with meaning. Some of this meaning will be discovered simply by spending time with the text and paying close attention to what Lewis has written. Further meaning will be seen by drawing connections–connections not only to other passages within the novel but also to other works by Lewis, to the events of Lewis’s life, and to the world of other writers who influenced Lewis. … I contend that this twofold approach–first, a careful reading and the second, adding these kinds of connections–will result in greater enjoyment of an already enjoyable book.”

Because this book is primarily a literary analysis, it does not contain a great deal of discussion about the story’s religious elements. There are many other books that look at the story from that angle. Devin focuses instead on language, on consistencies and inconsistencies in this story and Lewis’s other writings, and on the life experiences that stand behind the story. I really felt, as I read Inside Narnia, that the author was unlocking a great deal of the story to me.

Where Brown does deal with religious elements, he typically does so in a manner that is fair even if not thorough. He is careful to point out that this story is not meant to be an allegory for the story of the Bible. He writes “No topic surrounding the Narnia stories has been so misunderstood or has had so much written about it as the question of whether they are allegory.” He ultimately turns to Lewis who affirms that the books actually stem from this kind of thought: “Let us suppose that there were a land like Narnia and that the Son of God, as He became a Man in our world, because a Lion there, and then imagine what would happen.” While there are certainly obvious parallels between the witness of Scripture and the story told in the Narnia books, they are not and were not meant to be true allegory. This means that we should not go looking too deeply in our quest to find religious significant under every rock and in every crevice in Narnia.

Interestingly, this book made me realize what it is about Lewis’s world that kept me from falling in love with it as I did with Tolkien’s Middle Earth. I think the real difference is in the completeness of the world. In The Lion, The Witch, and the Wardrobe we see a world that very obviously has not been thought through to the extent that Middle Earth has been. Narnia has many clear and obvious flaws. Some of these were reconciled in further books, but many were just left unreconciled. There is much about Lewis’s world that just doesn’t make a lot of sense. I can see now that this kept me from believing the world as I did with Middle Earth.

All-in-all, Inside Narnia was a good and valuable read and one I enjoyed a great deal. It put to rest the haunting memories of high school level literary analysis that seemed to award not truth but originality in dissecting stories we knew nothing about written by authors we had never heard of. This book, on the other hand, represents the work of a man who has studied both the author and his work. It opens up the story and allows us to see what we certainly would not otherwise know. I definitely recommend it to anyone who has read The Lion, the Witch and the Wardrobe.