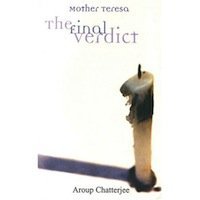 Buy from Amazon
Of the many biographies of Mother Teresa available to us, to my knowledge only two of them are largely critical in nature. The first, provacatively titled The Missionary Position examines Mother Teresa’s faith and practice. Written by Christopher Hitchens, the book received a fair amount of recognition and formed the basis for a television documentary. The book is quite short and contains very little in the way of footnotes and documentation.

The other critical biography is entitled Mother Teresa: The Final Verdict and is written by Aroup Chatterjee. This title is several hundred pages longer than Hitchens’ book and contains extensive documentation. Mother Teresa: The Final Verdict claims to reveal “the REAL Teresa (from the back cover).” Like Hitchens, Chatterjee is an atheist and his dislike of Mother Teresa has little to do with a religious bias. Like Hitchens, he has found that the reality of the woman and her work is a far cry from the legend. However, unlike Hitchens, he is a native of Calcutta, the city where Mother Teresa did her work, and the very city which will forever be linked to her.

Before I summarize the book, allow me to make one general statement. The book is long – probably too long. As I have already mentioned, Chatterjee provides extensive documentation and often provides multitudes of examples where only two or three may have sufficed. He sometimes repeats information in subsequent chapters, using the same information to prove two points. This, of course, is not necessarily a bad thing, but it does call into question the book’s organization. In short, the book has some of the problems typical of those that have not been professionally edited. Due to the nature of the book’s subject matter, professional publishing was not a possibility, so Chatterjee had to make do largely on his own.

A terse summary of Chatterjee’s primary concerns with Mother Teresa appear in the final chapter where he quotes his “Deposition Before the Committee for Beatification/Canonisation of Mother Teresa.” Among Chatterjee’s concerns are:

Through his research and involvment in the deposition, Chatterjee came to the realization that canonization is not bestowed on the basis of morality, but on the basis of strict and committed adherence to the tenets of Catholicism. As an atheist, this was exasperating to him.

What do we learn from a book like this? We learn that as Christians we must have a consistent witness in our words and our deeds. We also learn the importance of choosing our heroes with the utmost of care. And we learn that many heroes are manufactured – that the legend far exceeds the reality.