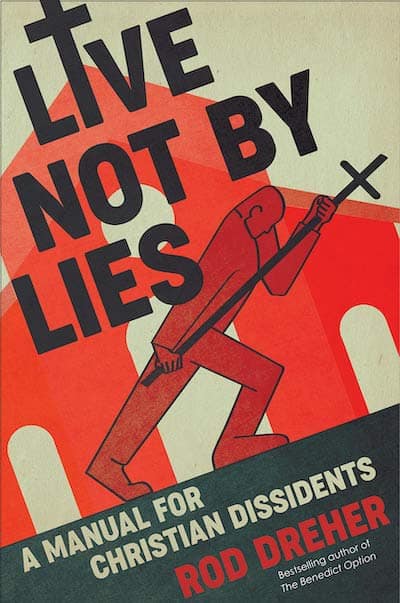 I grew up in the era of the Cold War. From my youngest days I was taught that the West was the bastion of democratic freedom and the Soviet Union the stronghold of oppressive totalitarianism. We knew who the enemy was, and we knew he was across the ocean, behind the Wall. On our fridge was a poster filled with names and faces of Russian Christians who had fallen afoul of that regime and been imprisoned. Each day we would pray for one of these strangers, one of these brothers. The fact that they needed our prayers reaffirmed the blessing of living in a country where we enjoyed old-fashioned liberal ideals like freedom of speech and the rights of the individual. It reaffirmed that not all men in all nations were so blessed.

I have often wondered what became of these Christians. How did they fare in their imprisonments? How badly did they suffer? How did their families survive in their absence? And today I wonder this: As they now look back across the Atlantic in our direction, what would they say to us? With all the recent changes in Western society, what counsel might they offer? How might their past experiences influence our present and future? Rod Dreher has wondered as well. Alarmed by what he sees as a growing number of similarities between modern-day America and Soviet-style communism, he carried out a series of interviews with people who lived under such regimes. Their answers to his questions gave birth to a new book, Live Not By Lies: A Manual for Christian Dissidents, and in it he means to prove that liberal democracy has decayed into something that is beginning to resemble Cold War-era totalitarianism and to suggest how Christians can respond and live with integrity.

Dreher believes that America has entered into a pre-totalitarian condition in which it may not take much for a fully-fledged form of totalitarianism to overtake the nation. This is unlikely to be the familiar “hard” totalitarianism of the former Soviet Union that depended upon armed revolution, government control, and distant gulags, but a “soft” form that will take on a guise of gentleness and concern for the marginalized. Compliance to its ideals will not be enforced by the state or a dictatorial strongman but by the small group of elites who forms public opinions and by the large corporations whose technologies have become deeply embedded in our lives. It will not be merely authoritarian, monopolizing political control, but fully totalitarian, demanding the conformity of every aspect of society to its controlling ideology.

This soft totalitarianism is based upon an ideology that has set aside the ideals of classical liberalism in favor of a new progressive creed. This creed, often known as “social justice,” diminishes individual identity in favor of group identities based on gender, race, sexuality, and so on. It understands identity groups to be in a state of constant conflict with one another, and believes justice involves taking power from the oppressor groups and giving it to the oppressed. This, it holds, is key to ushering in the long-awaited utopia. This creed, which spread first from the minds of philosophers to the halls of academia, has recently hit its tipping point and is quickly claiming dominance within America. In an increasingly secularized society it is meeting humanity’s need for meaning and purpose. The fact that it is utterly dependent upon lies—outright denials of what we see and know to be true (claiming that men can have periods, celebrating as “diversity” what excludes people of dissenting ideologies)—has not kept it from gaining tremendous prominence and popularity.

If a new form of totalitarianism is emerging, might we be able to identify its approach by studying past regimes? Drawing upon the work of Hannah Arendt, Dreher shows that many of the factors that prepared Russia and Germany for their twentieth-century totalitarian regimes seem to be present in twenty-first-century America: widespread loneliness and social atomization; a declining faith in hierarchies and institutions; a growing desire to transgress and destroy; ubiquitous propaganda and the willingness to believe useful lies; a mania for ideology; and a society that values loyalty more than it values expertise. There is another similarity: Just as it has most commonly been the intellectuals who have been the revolutionaries, sure enough, in our day it tends to be the middle-class, college-trained elites who are at the forefront of social justice thinking, messaging, and advocacy. “The twentieth-century totalitarian experience shows how a determined and skillful minority can come to rule over an indifferent and disengaged majority.” There is little reason that should not be the case today. The difference is that where under communism the goal was to seize the means of economic production, today it is to seize the means of cultural production, to own the ideas more than the dollars. And in this area social justice advocates have already made vast advances.

Dreher believes there are two factors that will play especially important roles in the rise and dominance of soft totalitarianism: the Myth of Progress that underlies the social justice ideology, and the rise of surveillance capitalism.

The Myth of Progress teaches that the present is necessarily superior to the past and that the future will inevitably be better still—a time in which there will be total equality, defined not by equal opportunity but by equal outcome. “This myth is a powerful tool in the hands of would-be totalitarians. It provides a transcendent source of legitimacy for their actions, and frames opposition as backward and ignorant.” Being on “the right side of history” demands ceding to the ideology, for to join is to work toward a better future while to resist is to remain trapped in an oppressive past. And aren’t those who stand against a better, more equitable future unjust? And shouldn’t the unjust be marginalized or even eliminated? This is how totalitarian regimes justify actions that further their control. And in this way social justice quickly becomes more than an ideology, but an alternative religion that, to succeed, must stamp out its Christian competitor. “The old, hard totalitarianism had a vision for the world that required the eradication of Christianity. The new, soft totalitarianism does too, and we are not equipped to resist its sneakier attack.”

“Surveillance capitalism” refers to the big businesses that amass personal data as their key sales and marketing strategy. Today we gladly trade vast amounts of such data for entertainment and convenience, but we give it to companies that are increasingly becoming “woke” and beginning to further social justice ideologies. “Big Brother is laying the foundation for soft totalitarianism, both in terms of creating and implementing the technology for political and social control and by grooming the population to accept it as normal.” Not only that, but Big Tech is not merely detecting what we like and giving us more of it, but also attempting to shape what we like, what we think, what we believe. It is largely doing so according to the tenets of social justice. If and when totalitarianism comes, the surveillance infrastructure is already in place and we have already come to be dependent upon it.

The question is, then, could this actually happen in America (and, by extension, other Western nations)? Is Dreher just being a pessimist, an alarmist, a scaremonger? That will be for the readers to decide as they evaluate his claims. But as for me, I think he makes a compelling case. And while he is clear that totalitarianism is not yet inevitable, he does warn that “like the imperial Russians, we Americans may well be living in a fog of self-deception about our own country’s stability” and “it is very hard for Americans who have never lived through this kind of ideological fog to recognize what is happening.” Forewarned is forearmed, as they say.

The second half of the book explains methods, forms, and sources of resistance that will keep Christians from surrender and compromise. Because totalitarian regimes depend upon endless lies for both their construction and their continuance, the greatest resistance is simply believing what’s true and speaking what’s true—or at least refusing to speak what we know is not true. We must, in the words of Aleksandr Solzhenitsyn, live not by lies. “It is up to us today to take up this challenge,” says Dreher, “to live not by lies and to speak the truth that defeats evil. How do we do this in a society built on lies? By accepting a life outside the mainstream, courageously defending the truth, and being willing to endure the consequences. These challenges are daunting, but we are blessed with examples from saints who’ve gone before.”

And here, in this matter of those who have gone before, I need to point out that Dreher is far more ecumenical than I am. His “saints” span Roman Catholic, Russian Orthodox, and Protestant traditions, all of which have very different and even contradictory understandings of the central message of the Christian faith, the gospel of Jesus Christ. He sees more unity between traditions than I can. Yet for the most part these important distinctions in doctrine have little impact on his calls to action, though, to be fair, his Orthodox theology does at times show itself.

It is in this section that Dreher most heavily relies upon his interviews with people who endured communist regimes. Based on their collective wisdom, he encourages Christians to:

Whatever else is true, this much is beyond dispute: Western society in general, and America in particular, is not today what it was a few decades or even a few years ago. The tenets of classical liberalism that built and sustained Western nations are slowly being reframed as the cause of human suffering rather than the solution to it. The Judeo-Christian worldview that informed its morality is being described as the dominant cause of sorrow, suffering, and oppression. Meanwhile, the principles of social justice, a refreshed form of Marxism, are beginning to be held up as a superior alternative, and this despite a century in which no ideology caused more pain or destroyed more lives.

Lives Not By Lies serves two purposes and, in my assessment, succeeds at both of them. It sounds the alarm, warning people to wake up, to see that the enemy is already closing in on the gates. And, in the eventuality or even the likelihood that it is already too late to hold the hoards at bay, it conveys hard-won wisdom from those who have faced a very similar totalitarian foe and overcome. They may have suffered along the way, but they at least maintained their integrity. And in a similar way, we may not be able to overthrow the totalitarianism “out there,” but by heeding their counsel, and searching the scriptures for more like it, we can at least overthrow it “in here,” within ourselves. We can live with dignity, without regret. In a society increasingly drowning in fabrications and falsehoods, we, of all men, must and can live not by lies.