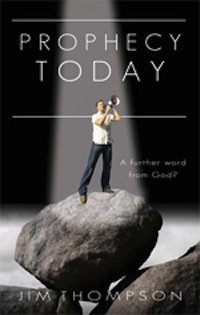 Buy from Amazon
“This book deals with a question that no twenty-first-century Christian can afford to ignore: does God-given prophecy continue in today’s church, or doesn’t it? And, if it does, can those who announce such prophecies sometimes get things wrong?” So says Stuart Olyott in his Foreword to Prophecy Today. In this brief book, Jim Thompson lays out his argument against contemporary prophecy. He does so in three chapters, presenting a logical argument that is both simple to understand and easy to follow.

He begins by turning to the Old Testament and to the gospels, laying out the distinguishing characteristics of prophecy in Israel. He focuses on the messenger formula so prominent in this kind of prophecy in which the prophet makes it clear that he is speaking not his own words and not a mixture of God’s words and his own words, but words that are wholly and entirely God’s. “Thus says the Lord,” is the call for men to pause and to listen to the very words of God. He shows that this formula continued through the gospels and that even there men understood that prophets spoke entirely for God. Though there were many different kinds of prophets, many kinds of prophecy, many kinds of behavior among prophets, what remained the same was their insistence that they spoke infallibly for God.

In the book’s final chapter, he looks to prophecy in our day, turning to several passages of Scripture and concluding that after the closing of the biblical canon, prophecy, being no longer necessary, ceased . All that God demands and expects that we know about Him is contained in the Scripture; any new form of special revelation serves to detract from the Bible. Here Thompson provides a long list of Christians from days past who have agreed that the age of prophecy has passed and that we should no longer expect this kind of fresh revelation; here he looks at and responds to arguments held as proof that prophecy continues today.

Prophecy Today is a short book and one that is effective, at least in part, for just that reason. Though it deals with a difficult issue, it does so with grace and in a way that anyone can enjoy. Thompson lays out the cessationist argument, at least as it pertains to prophecy, and does so with skill. Those wrestling with the issue and those seeking to understand the contrary view will find this a valuable little book.